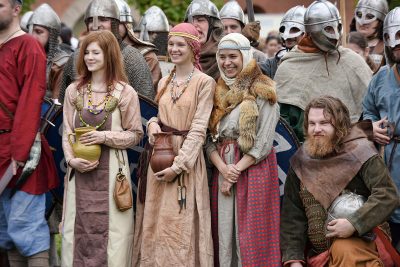 Enid started crying, so the priest got his question out before Enid threw herself into Gerraint’s arms.  Gerraint shuffled for a piece of velum in a secret pocket in his armor.  He started to hand it to the priest who looked at it curiously when Gerraint snatched it back with the word, “Can you read?”

“Of course,” Father Vespian said and stuck out his hand for the note.  It was a note that hinted at the great and heavy burden God placed on Gerraint in this life and it pleaded with whatever priest or person read the note to not hinder, but help in whatever way they could with whatever task with which Gerraint currently struggled.  It got signed and sealed by Dubricius, Archbishop of Wales, shortly before his death. The Priest looked to return the note, but Gerraint and Enid were currently too busy kissing.

Uwaine set himself to work with the city men, to keep an eye on the defeated Irish.  He also started asking around to see what sort of boat they might procure with the little bit of gold and coins Gerraint carried.  Uwaine would drive a good bargain, though he said more than once how Goreu had all sorts of wild ideas but was not the best on the details and follow-thru.

Gerraint took Enid by the hand and raced her to where her parents and Megalis were waiting.  The good Father had to catch up to return Gerraint’s note, but he waited because Gerraint started speaking again.  “Megalis,” He got in the trembling young man’s face.  “I intend to marry Enid.  Any objections?”  Megalis shook his head, rapidly.  Fenn scared Megalis.  Gerraint terrified him.  “Good.” Gerraint turned to Enid’s parents. “With your permission, I would like to ask for your daughter’s hand in marriage.”  Ynywl and Guinevak both nodded and smiled like doting parents should always smile, and Gerraint turned to Enid, thought a second, and dropped to one knee.  “Lady Enid of Caerdyf, good daughter of Lord Ynywl and Lady Guinevak, will you marry me?”

Enid still held his hand, but put her other hand to her hip and frowned.  “You could have asked me first.” she scolded softly.

“A pox on me for being a clumsy lout,” he said with volume.  After a moment of silence he added more softly, “Will you?”  Apparently, she thought he had suffered enough.

“Yes, please,” she said, and they had a time out while he kissed her again.  When he took a short step back, she held tight to his arm.

“You may yet change your mind.”  He patted her hand gently on his arm and turned to Megalis and Ynywl.  “Now, here is my judgment and also some of my reasoning.  Megalis, you claim the whole of the land because your father was the eldest. But, in my mind, your grandfather was older still and by virtue of his age and position, he outranks your father. Whether you like it or not, he divided the land between his two sons, and you have no right to deny that decision. Caerdyf and the surrounding land as your grandfather decreed belongs to Ynywl and his heirs, forever, and you have no right to claim another man’s land.  To that end, I gave the Irish two hours to get out, I graciously give you two weeks.  Go back to your own land and to the great house you have, and be content.”

A large number of city people still watched everything, and they took a moment to cheer.  No man is a great lord, and not many are good, but the people recognize and suffer under the bad apples, and soon enough will be happy with almost anyone else.  To be fair, Gerraint figured most of Megalis’ bad decisions were made by the Irish, but then he imagined Ynywl might have been one of the good ones, so putting him back in his place seemed an easy choice.

“Now, as for compensation,” Gerraint continued. “You stole seven years of taxes from these people.  You must pay it back out of your own pocket.  You may take seven years to do it, one year at a time, but Ynywl will need the funding to build roads, for new construction, to maintain the fort with men at arms, and build ships to defend the coast from things like Irish pirates. It will be like Pharaoh’s dream of the fat cows and the skinny cows.  Ynywl will have seven fat years and you will have seven lean years, but after that the debt will be paid and you can become good neighbors.  You are family, after all.”  And Gerraint thought, hereditary chieftains who are like vassals of the Pendragon.  All they need are titles like Duke and Earl.

“Forgive me, Lord Goreu,” Ynywl spoke kindly. “But who are you to be making judgments?”

Gerraint forcibly set Enid aside.  She had to hear this, unattached, to make up her own mind about things.  He cleared his throat.  “I am Gerraint, son of Erbin, High Prince of Cornwall, Knight of the Round Table and sometimes called the Lion of Cornwall.  Of course, you can always appeal any decision I make to Arthur.” He glanced at Enid.  To his delight she retook his arm and spoke softly.

“Lord.”  The parish priest finally got his attention and returned the velum note.  “How may I be of assistance?”

“Oh yes.”  Gerraint almost forgot.  “You heard Erin’s confession that she had already married Fenn when she took her vows to Megalis.  Why don’t you see if you can work out an annulment.  Megalis might want to legitimately marry someone someday.”

“A fair suggestion.  I will start at once.”  The priest also looked pleased.

Gerraint and Enid walked side by side.  “You know Goreu is my real name, I mean the one my mother gave me.  Gerraint is just the British version of the name.”

“You don’t have to explain yourself to me. Our marriage won’t mean much if I can’t trust you.”

Gerraint let out his best smile.  “I think I love you.”

“That is a good start,” Enid encouraged him.

Arthur and Gerraint are invited to the continent for the first time.  Their Celtic cousins are backed to the wall and need help.  Until then