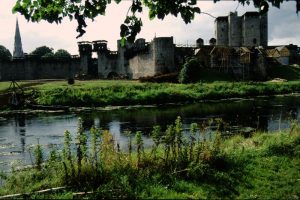 “So, who is this sudden friend of yours?” Arthur asked.

“Lord Pinewood.” Gerraint said as he tried out the poor mattress on one of the slat beds originally made for legionnaires. The bed creaked, like one ready to fall apart any minute.

“We have met,” Pinewood said.

“I have that feeling,” Arthur looked at the man. “But I also feel a sudden chill on the back of my neck.  Goreu, please explain.”

“He goes hunting in his spare time,” Gerraint said, as he took the straw mattress and laid it on the floor.  Arthur’s eyes got big.

“I thought that was you,” Percival said brightly. “How are you?”

“It won’t be easy breaking out of here,” Captain Croyden interrupted, as he stepped away from the door.  “It has a deadbolt and probably guards.” 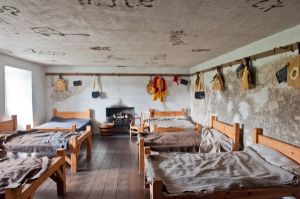 “I don’t think breaking out will be much of a problem,” Arthur said, and he decided to lie down as well so he could have the excuse to close his eyes.

The sun went down and Gerraint popped up from his nap.  Arthur and the RDF were discussing possible ways of escape from their prison room. They had to capture the gatehouse to open the gate, but they wanted to do so without being found out, if at all possible.

“What room is beneath us?” Gerraint asked first thing.

“A storage room for hay and straw for the horses,” Pinewood said from the corner where he and Percival appeared to be doing something.

“We can’t tear up the floorboards,” Croyden objected.  “This floor is solid.  Even if we had the equipment it would bring every guard in the fort down on our heads.”

“Then we use the escape hatch,” Gerraint suggested.

“Over here, Lord,” Pinewood called.  He and Percival struggled to remove a six by six trap door that had no lock or hinges but looked to fit perfectly into the floor.

“I think I don’t want to ask,” Arthur said, while Gerraint lowered himself into the dark space below.

“Alleluia,” Gerraint breathed as he let himself drop. He whispered back up, but it sounded sharp and plenty loud.  “Pile of hay. Soft landing.  Come on down.”  They came, one by one, and Pinewood came last of all so he could, somehow, close the flooring above them.

The room had only a small touch of light around the door, unlocked, of course, because no one would steal hay.  It let out on to the small courtyard by the back of the great hall.  “You know, the Romans built the same thing over and over.  Once they found a good design, they tended to stick with it.”

Pinewood tapped Gerraint on the shoulder and kept back to be last.  “Get your men and meet us in the gatehouse.  Cornwall hunters,” Gerraint said, and caught up to Arthur.

The going got slow.  The moon had risen three-quarters full in a cloudless sky, so they had to avoid the open spaces.  They inched along the wall and Gerraint could not help himself thinking, “Louie.  I said the coppers would never hold me in Alcatraz.”  Fortunately, he held his tongue.

When they arrived at the gatehouse, the guards were all sleeping except one.  Word had evidently gone around not to expect any activity until morning.  Arthur insisted on taking out that one guard by himself, and he almost succeeded.  The man cried out, but in surprise, not in fear or death.  It sounded as if one of his fellow guards snuck up behind him and said, “Boo!” Even so, it got enough to rouse two sleepy men.  They barely got out the door to yawn before they were riddled with arrows.

Pinewood, and his half-dozen hunters came forward with a jar of anti-blue gel and different clothes.  “I stepped out and picked these up,” he said.  “We don’t want your own men mistaking you for the enemy.”

“Quite right,” Arthur said, and he dressed to receive the army.  Percival got the torches as soon as he changed, and he and the three men from the RDF climbed to the top of the wall.  Two of 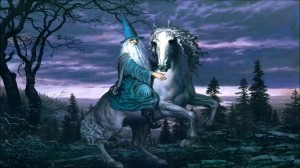 Pinewood’s men climbed with them, just to watch, they said, but everyone understood that meant watching up and down the wall to stop any unwanted intruders.  Arthur, Gerraint and Captain Croyden took care of the rest of the sleepers and then went to open the gate.  The rest of Pinewood’s men had their back.

Meryddin, the first one in, got loud.  Gerraint took a great risk when he wrapped his hand over Meryddin’s mouth.  “You will probably bite my hand off,” he said.  “But if you don’t be quiet you will get a lot of people killed.” Gerraint slowly removed his hand and then swore he could see the steam coming out of Meryddin’s ears.

The first third of Arthur’s army came in quietly, but then the impatient idiots in the back third began to shout war cries, which quickly ended the silent surprise.  Even so, many of the Saxons were caught in their sleep, and many others got killed or taken when they were still half-asleep.  Some fighting broke out on the main courtyard and in taking the Great Hall, but the defenders soon got overwhelmed with numbers and knew their cause had been lost.

Colgrin lost his head, though no one confessed. They assumed he lost it to a Saxon blade because someone thought Colgrin betrayed them.  When it was over, they brought up the Pictish prisoners and they and the Saxons were offered their lives.

“Hear me,” Arthur yelled at the Lords of the Saxons and the Chief men of the Picts.  “I destroyed two armies in two days, and you had no strength to stand against me and no way of stopping me.  You dared to set foot on British soil.  I should hang every one of you.  But I can be gracious.  Pledge, by your strongest pledge, that you will go home and never again set foot on British soil, because understand this.  If you come again to British soil to attack and do harm to the British people, I will set foot on your land and destroy your people.  You have failed.  But I will not fail.  I 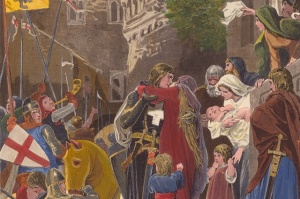 will so destroy your homes, not a child will be left to cry and your land and inheritance will be given to others.  So take heed and go, and do not come back.”

The enemy left, and Gerraint asked his little ones to please watch to be sure they went home.  He asked them just to watch, but he knew the Germans as well as the Picts and Scots would be harassed the whole way as incentive to keep their pledge.