Arthur moved the army by the obvious route toward York.  He figured if Colgrin had any sense, he had scouts out spying Arthur’s progress, and a whole army would be kind of hard to hide.  Gerraint, Arthur, Meryddin and the old men went over the map again and again, looking for some way to limit their exposure, but it seemed impossible until Arthur pointed to the open hill beside the Ure River.

“We can turn aside here in the forest of Bedegraine and come out here on the hilltop.  As long as we set our camp within the trees, we might stay hidden a few days anyway.”

“Might.  Maybe. Could be,” Meryddin did not actually object.

“But still a chance,” Pelenor sounded optimistic, which surprised the group.  “You have men keeping an eye on the Picts and Kai and Loth have joined to chase them from behind.  No reason they can’t chase Caw toward the Ure.”

“This will, by necessity, be a different kind of battle,” Gerraint mused out loud.  “Lancers are not effective in the woods.”

“A company of stout hunters would certainly help our cause,” Arthur said, with a long look at Gerraint.

“But most of our men are hunters,” Pelenor said. “Have to be these days since it got colder.  The growing season has gotten short and the snows of winter have gotten deep.”

“This will be bows and arrows,” Meryddin agreed with a sharp look at Gerraint.  It was not the first such look Gerraint got from the man.

“It would be good if we could catch them between us and the river,” Peredur seemed in general agreement.  “They will have nowhere to run with their backs to the water, and we will have the high ground.”

Gerraint answered Arthur and avoided Meryddin’s eyes. “I’ll need to think about it.”

Two days later, Gerraint went into the woods, Uwaine, his faithful squire behind him.  “Now, don’t be scared,” Gerraint said.  “No matter what happens, they won’t hurt you.  You have to trust me.  You always have to trust me and this is a good time to start.  Do you understand?”

Uwaine nodded.  “Should I shut my eyes?”

“No, Percival,” Gerraint called him.  “You must always keep your eyes open so no enemy can sneak up on you.”  He turned to the woods and hollered.  “Pinewood!” and a man dressed like a hunter, but with a tunic that showed the lion of Cornwall stepped from the trees. 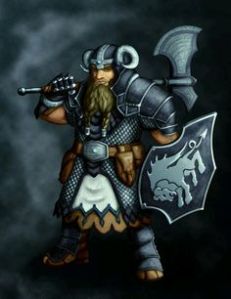 “My Lord.  So you know, I have a rather large company of hunters anxious to help.”

Gerraint shook his head.  He would not put them at risk for a transient human event.  “Got any dwarfs and dark elves on tap?”

“Right here,” a dwarf with a long black beard that covered his face and chest apart from his bulbous nose and two bright eyes, and dressed in chain armor that fell to the ground, and hefting an oversized ax for his height, stepped out beside Pinewood.  Gerraint knew him immediately, though they had never met.

“My squire, Uwaine,” Gerraint made the quick introduction.  “Lord Pinewood and Lord Bogus.”

“Pleased to meet you,” the little ones said, and Uwaine tried to smile for them but his tongue appeared to be tied.

“Now, to business.  I know that you and Dumfries’ people have all sorts of enchantments to scare the poor humans and keep them out of certain places, particularly in the woods.  What I am asking is for a hedge on either side of the Picts and Scots that will guide their forward motion toward the Ure.  In a perfect world, they should end up by the river right below our current position, with Kai and Loth right behind them.  Pinewood, I need you to visit Kai and Loth and direct them to the battle point.  You can take a few hunters with you as long as they wear the lion of Cornwall.  But that means you have to remove all your tricks and traps after the Picts have moved in the correct direction and before Kai and Loth arrive.  We don’t want poor Kai scared witless.  Now, can you do this?”

“Easy,” Bogus said.  “Especially since they are headed in that direction anyway.  But where then do you want us in the battle formation.  On the south end opposite Kai and Loth so we can close the trap?”

“Nowhere,” Gerraint said.  “The lancers and RDF will dismount and take the south end.  I do not want you to expose yourselves.  You are not allowed any casualties; do you understand?”  Pinewood and Bogus nodded, but looked terribly disappointed.

Uwaine tugged on Gerraint’s tunic.  He looked down at that face which said, “What if the Picts swim the river?”  Gerraint smiled.  He thought much the same thing.

“Okay.  You can take up positions across the river, and any Picts or Scots smart enough to escape that way, you have my permission to chase them all the way back up to the wall. I would think a couple of ogres, some goblins and maybe a troll should do the trick.  Meanwhile, when the battle starts, Bogus, I want your people to set a circle around York.  I want no one to get in or out of that place until we get there, so Colgrin has no way of knowing what is happening.”

“You are confident of victory?” Pinewood asked.

Gerraint nodded.  “But only because you folk have never been much for following orders.” Bogus and Pinewood both grinned, slightly.  “But Bogus, especially if we are victorious as I hope, Colgrin better not find out. That is one order you better pay attention to.  Do you hear me?”

“Yes lord.”  Bogus and Pinewood bowed, and Bogus vanished back into the woods in only a few steps, while Pinewood got fairy small, much to Uwaine’s delight, and flew off at top speed.

“Son,” Gerraint said, sounding very much like master Pelenor.  “This is one thing you are not allowed to talk about.  You must never mention dwarfs or fairies or anything of the kind to anyone.  Okay?”

“Can we do that again sometime?”