Four years later, Greta left the Governor’s mansion alone in the early morning.  She just entered her eighth month with child number two.  A daughter to go with her son.  Faithful Alesander led the cart.  He would follow her to Hell if that was where she was going.

They went slowly because the new road through the forest was still rough in many spots.  They arrived late the next afternoon at the village of the Bear Clan. Greta rested at Baran’s house as was her custom.  Several men came to pay their respects, but then Baran’s wife turned the rest away. She knew what the eighth month could be like.

In the wee hours before dawn, Greta got up and went out to the new stables beside the new inn.  The Dacian who ran the place made a home brew beer which became very popular with his Gaelic patrons.  This was a good thing, Greta thought.

She made herself as comfortable as she could, sitting on a small stool.  She waited, but she did not have to wait long.  She heard a bang.

“Oh shush yourself, you old biddy,” the response came out of the dark.

“Old goat,” the woman came right back.  “I hope that was your head and it knocked some sense into you.”

“It was my toe,” the man responded.  “And if it wasn’t hurting I would use it to kick your butt.”

“Quiet, both of you.”  A young woman spoke.  “If you two don’t stop making love we’ll never get anywhere.”  She called it right, and Greta heard a young man laugh.

“Ahem!”  Greta cleared her throat.  “Over here,” she said.  She just turned twenty-two, a young mother in her prime.  She could have easily gone to them, eighth month or not, but why?  Let them find her.  “Over here,” she repeated.  They knew her voice, too.

Berry and Fae were the first to come out of the shadows.  They came timidly, holding hands.  Hans and Hobknot came behind with Hobknot’s mouth running.

“I told you it was no good sneaking off,” he said.

“And I told you I was not going without saying goodbye to my sister,” Hans said.  “But I was not worried.  I knew I would see her.”

“Oh, you did?”  Greta got up slowly.  Hans came quickly to help her to her feet.  She hugged him and whispered three words in his ear.  She made him repeat the words over and over until he could say them perfectly.  Meanwhile, she hugged all of the others, including Hobknot who turned a perfect red and covered his face with his hands in case she thought of giving him a kiss.

“So, where is your father?” Greta asked Fae and Berry.

“She knows,” Berry said with surprise.

“Of course she knows,” Fae said with certainty.

“From the dragon village we go north.”  Berry spoke as if repeating a lesson.  “We must go over the Toothless Mountain and beyond the Way of the Winds.  Through the pass called the Ogre’s Jaw which is the only way through the Rumbling Ridge. Down the other side, we go through the Forest of Fire and pass the Lake of Gold which must be on our left hand. We must go through the Swamp of Sorrows until we reach the River called Heartbreak.  From there we travel down the river beyond the Giant Rock and the Troll’s Eyes until we see the Mouth of the Dragon.  The Mouth will take us under the Heart of the goddess by the Road of Dreams and at last, at the end of the road, we will find the Broken Dome of the Ancient Master.  It is there that a secret door leads to the Land of the Lost, and our Father is there, still living among the lost.

North over the Transylvanian Alps and plateau to the Ukraine.  How far, then?  To Kiev? All the way to Moscva?  Greta translated.  “Sounds exciting, and complicated,” she said.  “You will remember all that?”

“We will remember,” Fae insisted.  “We seek our father’s blessing on our marriages.”

“You and Hobknot,” Greta teased, and Hobknot spun around several times in embarrassment before settling on a spot with his back to them all.  He probably looked scarlet.

“You didn’t have to tell her that part,” Hobknot protested.  “Make me sound like a love-sick puppy.”

“But you are.”  Fae, Berry and Hans all said more or less the same thing in near unison, and then laughed a little.

“Hobknot.”  Greta called him and gently compelled him to come to be sure he did not run away and hide for the next fifty years.  “You are also the eldest,” she said.  “And a little one with a good, sensible brain.  Use it.  I expect you to think clearly if the way gets muddled and speak sense, even if the way appears nonsense.”  Greta took off the ring of Avalon.  It had the seal of the Kairos.  She put it on Hobknot’s thumb and it fitted itself snugly there so it would not come off. “I am trusting you to speak in my name. Just make sure it would be words I would actually say.  I want you helped, not hindered along the way.” 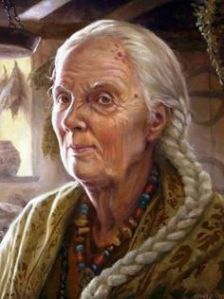 “Hear that, all of you?” Hobknot said, proudly. “My lady says you got to listen now when I talk sense.  I speak for the lady.”

“Never worry,” Fae said.  “If his head swells up, I’ll just knock him down and sit on him until the swelling goes away, I will.”

“Listen everyone,” Greta said.  “Don’t forget Fae knows truth from lies.  Listen to her carefully, especially when she warns that someone is lying.”

“I wish I was there when the messenger came,” Fae said.  Greta agreed.