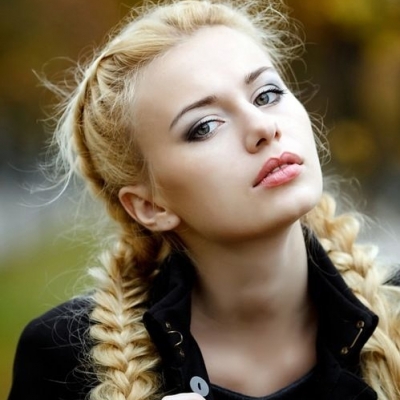 “Anything else?”  Greta stood.

“No.  I need to finish these correspondences now.  I want the couriers to leave for Rome in the morning,” he said.

“I suppose I had better go prepare myself to go to Rome,” she said.  “To meet Darius’ father, and probably your father, too.”

“I wouldn’t worry about it,” Marcus said. He looked up one last time.  “A sweet barbarian girl like you with all of your special talents.  Lady goddess.”  He smiled and half saluted in Greta’s direction.

Greta returned his smile.  “Big oaf.”  And she returned his half salute before she stepped into the hallway.  She heard Marcus ask the General.  “What is an oaf?”  She almost felt the General shrug as she traded places through time with Salacia and Salacia caused the two men to freeze where they stood.  She felt sorry for what she had to do, but it got decided the day before when Greta had to call on the good Doctor Mishka to dig a few bullets out of the wounded.  She felt especially sorry for Marcus.  He had become so human, so alive in these back woods.  She felt sure it would kill him.

Salacia floated out over the battlefield.  A full day later, and there were still bodies littered all around.  Nearly a thousand men had been killed in the battle.  That number would triple, perhaps quadruple in the days and weeks ahead. Salacia was not authorized to simply heal everyone.  Generally, sparing people from the consequences of their actions was the worst thing a goddess could do.  There were rare exceptions, but this was not one of them, and Salacia felt sorry for that as well. 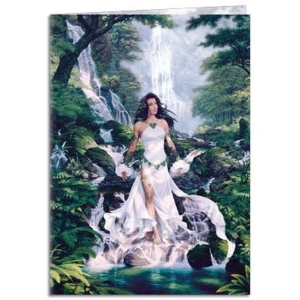 Salacia floated to earth and materialized beside the main stream which flowed out of the remains of the mount.  She supposed her appearance looked like the appearance of Glinda, the good witch of the north.  She did not mean for it to be that way, but she did not really pay attention.  She imagined some men saw her appear and fell to their faces.  She felt sorry to ignore them, too.

Her attention stayed riveted on the top part of the great statue of Odin.  The head, one arm upraised in blessing, and the chest were planted firmly in the mud beside the new stream.  It looked very much like the top of the statue of liberty at the end of the original Planet of the Apes movie.

Vasen stood there, staring at the statue, weeping softly.  Apparently, Marcus decided to leave the Priest alone.  When Salacia walked up beside the man, she became fully manifest but had toned down her awesome nature to near human levels.  She might have passed for an ordinary lady out for a stroll apart from being so inhumanly beautiful and attractive.

Vasen looked up.  “It’s all gone, you know.”  He spoke through his tears.

“Nonsense,” she said.  “It has not yet begun.”  With a mere thought, she pushed the edges of the mount into the deep until it truly became a large lake, fed by underground springs.  Her mind followed the stream as it ran through the forest, and she only altered the course slightly to make it meet the Sylvan River at the swamps.  She wanted the stream to clean out some of the horrors of that area, and she made it so.

Vasen stood up.  He watched her, curious.  She lifted her arms.  All of the guns, the bullets and everything that did not belong in that time floated up in the air, and in a wink, she sent it to Avalon.  They were museum pieces now. 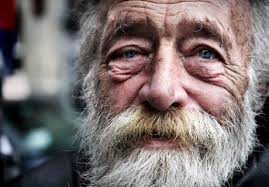 “After a fashion,” she said.  “My name is Amphitrite, but the Romans call me Salacia in their tongue.”

“I’m sorry?”  Vasen looked confused.  “But a fine lady such as yourself should not be out here on the battlefield.  There are still things about that a lady should not see.”

“Nonsense,” Salacia said again.  “But I really came only to say goodbye to Granfather Woden.” She blew a gentle kiss to the statue, and the statue quietly crumbled to so much gravel.  She made the gravel line the bed of the new stream.

Vasen went to his knees.  He began to weep again.  “goddess.”  He called her rightly.  “Why did the temple have to be destroyed?  It is all gone now.”

“Hush,” she said and brushed his hair with her hand. “I told you once already.  Men will come, from the Greeks, the Macedonians, from Byzantium and the East, and they will be clothed in power from the Most-High.  They will speak of the one who was raised up on the third day, and all of the people will be drawn to them, to worship the King of Kings and Lord of Lords.” Salacia kissed the top of Vasen’s head, and he forgot all about the weapons of Trajan.  An earthquake released the water from below and that destroyed both the temple and the mount.  The people were in plain rebellion, but the Romans and the people with them won the day, and turned back the invasion of the Quadi, besides.  She let that thought ripple out from that place like one stone thrown into a calm pool.  The circle of forgetfulness spread until it reached for miles and miles. 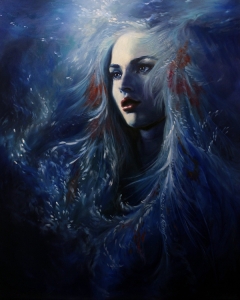 Vasen calmed when she kissed him a second time.  He forgot all about the little ones, about Thorn and Thissle, about Avalon, and Greta’s place among them.  She let this also spread, but certain ones she protected. The Romans, Dacians and Celts all thought the knights of the lance belonged to the others, and that, she felt, might help keep some in line.  Vasen even forgot his vision of the goddess hovering over him that moment, but Salacia left the vision of Danna among the Celts.  She hoped that vision would promote peace.  Then like the ripples from the pebble, she let that fading of the memory spread out from there until it touched all whom it needed to touch.

Salacia vanished from that place and appeared in the secret place in the forest.

Bogus the Skin, Gorse, Ragwart and Thunderhead all appeared.  They had no choice, though Thunderhead kept sleeping.

Bogus uncovered his head and nudged Ragwart to do the same.  “It’s not our lady, Greta,” he whispered to Gorse.  “It’s out great lady herself.”

“I can see that,” Gorse whispered back, and whipped off his hat.

“What?”  Ragwart did not quite catch it.

“We’ve stopped all eleven riders,” Bogus said, and took a very humble step forward.  “I don’t believe any got through.”  He pointed to a great pile of things.  There were a couple of guns, but mostly spears, swords, a couple of tents, several cooking pots minus the ones the little ones kept, one wagon load of mason tools, and so on.  And there were only three riders. 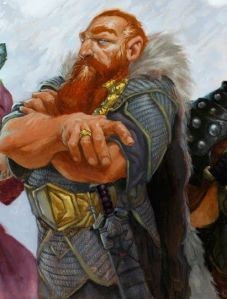 “Thank you,” Salacia said, and smiled, and loved them dearly.  She sent the pile to Avalon and sent Thunderhead back to his bed, never to know he had not been there the whole time.  “Berry is fully human now,” she told Bogus.  “But if you have Fae for a time, be content.  Only try not to corrupt her.  She is a sweet woman, and remember she is still half human.”

“Too late,” Bogus said.  “If she has taken up with that old bachelor, Hobknot, you can be sure she’s been corrupted already.”  Bogus shook his head.

Salacia laughed a merry little laugh.  “Be good boys.  No more stealing,” she said, and disappeared to appear instantly where Fae, Hobknot, Thorn and Thissle were celebrating their survival.

“Great Lady.”  Thissle curtsied, fairy style, as well as she could.

Thorn and Hobknot were quiet, but Salacia knew why.

“No.”  She said, simply.  “You cannot go to Greta’s wedding.  You know the rule.  You may have a celebration apart, but you are not allowed to mingle with humans.”  She got firm and sounded like the roar of thunderous waters crashing against the rocks.  Such interactions caused no end of trouble and caused her no end of headaches. “Now Fae.”  She went on a little less firm.  “You may 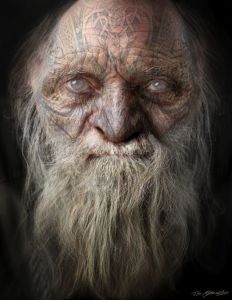 visit your sister from time to time, but make sure you are not seen.  Your work may still be in this world, but your place is now separate and apart.”

Hobknot lifted his hand and looked so uncharacteristically meek, Salacia almost laughed again.  She handed him two bags of grain and seed, and two containers of milk and one of sweet honey.  She gave the same to Thorn and Thissle, though they claimed they needed nothing.

“Remember Nameless in the spring, and the Don, the mother goddess in the fall.”  Salacia said.  “Remember Junior whenever the north wind blows, and me in the long, hot summer. Think of me wherever the waters run cool and clean.”  She vanished. She went to see Hans and Berry.