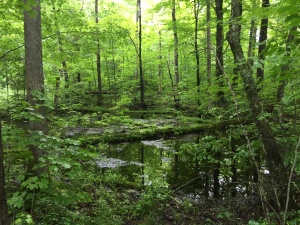 The armor adjusted automatically to Greta’s shape and size, and as she thought on it, it felt very comfortable, and not at all too heavy.  The cloak of Athena also felt much warmer than her poor red cloak, and she could make it longer with a thought, so it got long enough to act as a blanket.  She lay down on the heather and added her own “Thank you” to the moon, her Artemis moon. She slept, and this time, she slept peacefully, and without dreams.

Greta woke in the morning feeling much better in her mind and heart.  She had faith that somehow that morning everything would work out. She had hope, even if she felt terribly thirsty.  A bit of breakfast would have been nice as well.

She smelled the air.  It smelled fresh and clean.  She looked all around and felt that the Sylvan River had to be fairly close.  She started out in that direction and was not even aware that she wore her armor until she stopped to relieve herself. She decided to wear it for a while. It really felt 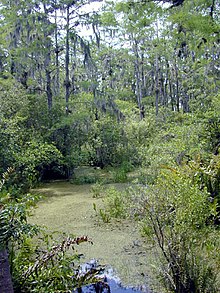 that comfortable, and she did not mind the feeling of protection it gave her.  Besides, it became hers for her entire lifetime, and this was her lifetime and she would live it for all it was worth for as long as she could.

Greta came to a spring fed stream and had a long, cold drink.  Why did she head toward the river?  She could not imagine the reason, but there had to be one.  If nothing else, she decided to see where the path let out.  It did not take long, though, before she started to get bogged down in a swampy area. The fact that she wore water-proof knee boots rather than sandals helped a lot, but after a while it still became rough going.  She kept thinking any moment she would break out on to the riverbank, but the bog continued, and she could see no end.

Something caught the corner of her eye and the hair came up on the back of her neck.  It wasn’t Berry.  She considered pulling Salvation, the sword Nameless had graciously left her.  She might have brandied it as a warning, but she could not be sure if her arms were strong enough, even for this sword made for a woman.

She stepped around a tree and a man blocked her way.  He shimmered in the dim sunlight and looked beautiful to behold.  Greta felt an instant attraction to the man which felt so strong, she almost rushed to his feet.  She had to struggle to check herself. 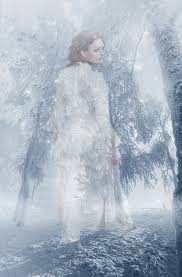 “What do you want?” she asked.  The man said nothing while a second man stepped out from the shadows.  He looked very different, but in his own way, he appeared as attractive as the first.  Greta felt herself flush with desire and excitement.

“What do you want?” she asked more sternly.

A woman stepped forward.  Hers seemed an unearthly beauty beyond anything Greta ever imagined.  Greta felt the urge to fall into the woman’s arms and kiss her passionately.  That felt wrong.  She was one who never had any inkling in that direction, and the thought repulsed her a little and returned her to her senses.

“Come share my love.”  A second woman came into the light.

They are not real people, Greta said to herself, and she started to back away until she realized a fourth man and two more women stood behind her.  She got surrounded.  The ones behind her, however, had the morning light behind them, and she could see through them in a distorted sort of way.  They looked translucent, and whatever else they might be, they were certainly not people.

Greta closed her eyes for a brief moment and cleared her mind and heart as well as she could.  The first rule of magic was to let be what must be.  When she looked again, she saw demon faces where she had seen beauty, and ghostly, floating figures where their bodies had been.  They still called to her, but she could no longer hear them. Instead, she found Salvation securely held in both of her hands.  She decided the adrenaline helped, but the sword proved not nearly as heavy as she had imagined.  Several of the demon faces appeared to laugh.  They had faced swords before and such weapons were ineffective against them. Greta swung clumsily at the one nearest to her.  It neither moved nor ducked, apparently expecting the sword to simply pass through. 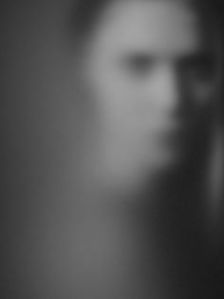 Instead, as she cut the creature, it bubbled and fizzed for a moment like carbonation in a glass of ginger ale, and then popped and vanished altogether from the world.  The others backed up significantly, and the smug looks on their faces changed to sheer cruelty.

“Help!” Greta screamed on the inside, but no one answered.  She did hear the word, “Wyvern” followed by “Succubus.”  So she knew what she faced.  “Thanks a lot,” she said out loud.  She tried to back up and swung her sword as much as she could, but these creatures were no fools.  They had let her come way into the swampland before they approached her.  Her arms would tire long before she got out of their territory, and even as they did tire, the Succubus began to close in. She caught no more of them with her wild swings.

Suddenly, a beautiful young girl of about twelve years of age stepped out from behind a tree. “Wyvern,” she called.

“Berry, no!” Greta shouted.  She knew who it was, even though she had never seen Berry before in her big form.

“Lifegiver.” The Wyvern called out, and they all turned instantly from Greta to attack the little spirit of life.

“No!”  Greta screamed as did Berry, but just as they came at her, something like fire poured from Greta’s hands and eyes.  The Wyvern were instantly on fire, and they began to fizz and pop all over the place.  Berry stayed untouched.  Then Greta had to jump and cut one with Salvation, because while she got distracted by her concern for Berry, one came right up to her face.

She still faced three of them that the flames missed.  One floated in front of Greta, one to her right, and one behind her.  Berry, her small fairy self again, went up the tree to her left and Greta knew the little one would be safe for the moment.  Greta doubted she could deal with these last three. They seemed to know that as long as they did not threaten Berry, they were safe, and it would not be too much longer before Greta would be unable to keep her sword up, much less resist them.

“All right.” Greta heard a voice as clear as day in her head.  It could not have been someone outside talking to her because it sounded unquestionably like her own voice.  At the same time, though, it sounded like a male voice and that confused her for a moment. “I’ll take it from here.”  Greta gladly and gratefully let go, vanished, and let him come down through time to stand in her 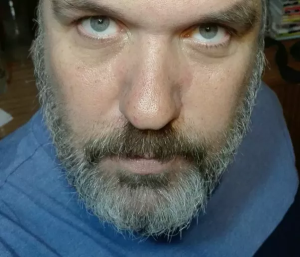 place.  Gerraint, son of Erbin appeared, but older than she remembered. This Gerraint was already a Knight of Arthur’s Round Table.  “Always willing to help a lady in distress,” he said with a grin.

The Wyvern recognized the change and began to flee, but already too late for them.  Two popped on the tip of Salvation’s point. Then Defender got whipped from its’ sheath.  It flew faster than sight and pinned the last Succubus against a tree, catching it square in the center.  The Wyvern bubbled, fizzed, popped and became no more, and Gerraint patted himself on the back because it appeared a near perfect throw.  “Practice.”  He told Greta, as he left and she returned in his place.

Greta had no time to respond as Berry attacked her from the tree, flung her little arms around her neck for a big hug and cried and then laughed because her little self could not reasonably do more than one at a time.

“I knew you were my Great Lady,” she said.  “The stories all said the fee were sometimes permitted to ride on the shoulder of their goddess, and you let me ride on your shoulder, and you could still see me even when you were not in the circle, and one of the gods came to fight for you, even though I missed you when you went away.”

“Hold on,” Greta interrupted.  “I’m no goddess.”  And she did not want to be one.  Nameless always came courteously restrained, but she had been Salacia in a moment of havoc. That seemed a power beyond anything Greta could handle, and a responsibility she would never want.

“But you are,” Berry insisted.  “Even when you are completely mortal and human, you are the goddess for all of the little spirits of the world.  And you will be our goddess in your next life, too, and the one after that, unless you are our god.”  Berry had to pause to puzzle her way through that thought.

“But you took an awful chance exposing yourself like that,” Greta said.

“No-oh.” Berry insisted again.  “Even when you are mortal, human, you have everything you need to protect and defend us.”  She became serious for a moment.  “And you make the rules and teach us and keep us on the path of righteousness.”  She paused again to swallow and her little eyes became big.  “And sometimes you punish us when we are bad, and they say your wrath is a terrible thing to behold, and I have to go now.”  Greta blinked and Berry no longer fluttered there.

Greta shrugged. Faster than a speeding bullet, she thought.

She considered Defender, stuck ten feet up the tree.  She supposed she could call to it and it would jump to her hand, but instead, she sent her armor and weapons home, wherever that might be, and became clothed again in her dress and red cape.  She found her dress cleaned and pressed, and sewn where the little tear had been.  She wondered if her little ones did that.  She supposed they did, and she felt grateful, though calling them her little ones would take some getting used to.  She wondered what on Earth she could do that would be even half as nice for them. She felt very warm and loved at that moment.  Then she saw him. 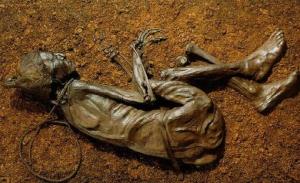 She gagged.  Sanger sat with his back to a tree.  She felt sure it was him, but he looked like a raisin or dried prune.  His eyes were rolled up in his head and his mouth hung open in a scream.  It looked like every ounce of life had been sucked out of him.  She turned away, but saw the bones of others.  Some looked like they had been tied or chained. Sacrifices, she thought.  There were some rusty old Roman weapons, too, and she knew why that Century of Romans never made it to the other side of the forest. She could not stay there.  She had to get out of that death swamp; that succubus graveyard.  She fled and felt terribly sick to her stomach.  She ran until she found herself scooped up by the arms of the gruff old man of the Bear Clan.

“There, there,” he said.  It seemed as if he knew she had been scared by something and he came there to protect her. In the next moment, she felt a rope slipped around her neck and the young man started to bind her wrists.

Greta is taken captive by the old ones, and they almost make her prefer being with the monsters.

Until then, happy reading. 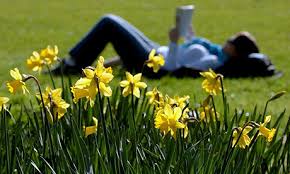