When Greta sat up, the sun already poked above the horizon.  She got angry with herself for sleeping when Hans needed her, and yet she felt calm, now, after some rest, and she could think clearly.  In the light, she might stand a reasonable chance of finding Hans.  In the dark night, and in her panic, she recognized she had no chance of finding him. She had behaved foolishly in the night, leaving the camp, screaming until she became hoarse, getting herself lost in the process.  She chided herself.  She really needed to learn to respond better in panic situations.

The first thing she did, after shaking out the stiffness, was climb the old oak.  The hill proved to be not very far away, and with careful inspection, she felt fairly sure she knew where the stream came cascading down the hillside.  It appeared so close, in fact, she realized that she must have been going in circles all night.  When she thought about it, she actually felt glad she had not gone too far from the camp.

It took nearly an hour to find her way there.  It looked like someone or something had kicked the fire into the stream.  While she refreshed herself with a drink from that clean, cold water, the image of Smokey the Bear floated up in her mind. She knew, then, that the lives she had lived in the past and the future had not abandoned her as she supposed. Indeed, they only waited for her to decide what she would do.  What she still wanted was to snap her fingers and have Hans appear beside her, safe and sound, but she had no such power to do that.  So, she decided to find where he left the camp in the night, and follow his trail until she found him, and pray that he might still be alive. 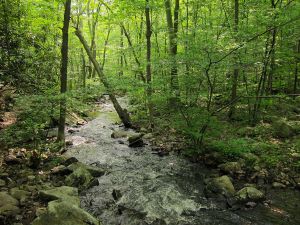 The wood that Salacia neatly stacked had been scattered here and there along with the stones that encircled the fire.  It looked like someone took great pains to make it seem as if no camp ever existed. Han’s backpack and blanket, and her basket were gone, of course.  There would be no breakfast, she told herself.  Still, at least she had her red cloak.  She had slept in it against the chill of the night, and now, on a cool spring morning, at least she would not freeze.

Greta began to search the perimeter of the camp for telltale signs of passage.  She found where she had run into the woods, and a moment later, she found where someone else had crashed through the bushes.  The Princess, gifted by Artemis herself, looking right there in her eyes, pointed things out.  The Princess, and Diogenes, who once got called Alexander’s eyes as his chief of spies, and who Greta imagined knew everything there was to know about tracking men in the wilderness, seemed to be right there with her all the time. Neither one traded places with Greta through time, though they could have, but they helped her see what she, on her own, would never see, and she felt grateful.

She followed Han’s path for a good distance.  He had not been very careful about where he tromped.  He tore up branches and bushes in the dark as if running.  Was he being chased or was he chasing something?  She did not know.  Neither the Princess nor Diogenes saw any signs of what it might have been.

At last the trail led her to a small meadow atop a very small rise.  She could follow his steps no further.  “Hans, Hans.”  She called out in a reasonable voice, because her throat still felt sore from the night before.  She walked toward the center of the meadow.  “Hans.”  She called once more, before she gave up calling.

Greta found a circle of polished and rounded stones very near the center of the meadow. A fairy 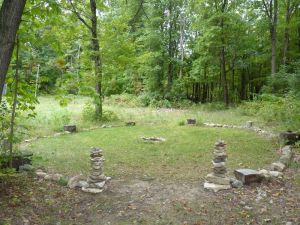 circle.  She knew just what it was, and with that realization, she had a terrible notion of what might have happened to Hans.  She took a deep breath and stepped into the circle.

At once, all of the world around her became more vivid.  The colors became more solid and real, the greens being greener, and the blue morning sky much bluer.  Something caught the corner of her eye, and she turned, but it turned, too, so as not to be seen.

Greta saw the little girl’s face peek several times before the fairy finally fluttered all the way into view.  She appeared a little thing, small enough to sit comfortably on Greta’s shoulder, and Greta imagined she was the most precious thing she had ever seen.  Greta loved her, instantly, but oddly, she felt sad for her at the same time.

“I’m Berry.” The fairy responded in a rather young voice.

“I am pleased to meet you, Miss Berry.”  Greta smiled.

“Oh, no, just Berry,” Berry said in a serious voice, as she hovered a few feet away. “I’m not nearly old enough yet to be Miss Berry.  Why, I’m not even, just barely seventy years old.”

Just a teenager, Greta said to herself, translating fairy longevity into human terms. “Still, it is very nice to meet you. Will you be my friend?” she asked.

“Wait,” Greta said, and Berry stopped as if she ran into an invisible wall.  “Have you seen my brother, Hans?” she asked quickly, and Berry came back. 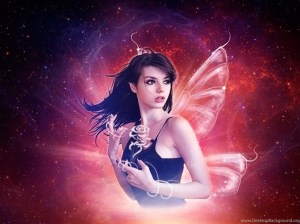 “Was he as big as you?” the fairy asked.

“Did he have the same yellow hair and soft brown eyes as you?”

“And was his complexion ruddier than your milky white skin and without your freckles?”

“Exactly.” Greta knew that Berry had to have seen him.

“And did he walk tromp, tromp through the forest so as to hear him from miles away?” Berry went on.

“I suppose.” Greta had to cut this short. “Have you seen him?”

“No,” Berry lied, and Greta knew it, but Berry quickly covered herself with a suggestion. “But maybe the old killers of the Bear Clan can help you find him.  I will take you to them.  Come. Step out of the circle and come this way.”

“Killers?” Greta had to ask first.

“They kill the trees that Bogus the Skin marks for them.  They show no mercy.  It is chop, chop, chop.  And they drag the poor trees through the bushes, crushing all of the life and my poor flowers.”

Greta could tell that Berry got upset at the thought, but Greta had another question. “The Bear Clan?”

Greta knew she would get no better answer, so she stepped from the circle, but kept a wary eye on Berry the whole time.  Sure enough, the instant she got out of the circle, Berry started to fly off at great speed.  “Wait.” The wall went up and Berry stopped, cold.  “Come back here,” Greta insisted,

and Berry came back.  Greta could read fear on Berry’s little face.  It would have upset Greta to think that she, of all people, would cause this little one to be afraid, but Greta knew that in a moment, the fairy would flit to a completely different emotion.  Those little spirits could barely hold one real emotion at a time.

“You can see me,” Berry said, and sure enough she became very curious.  “You are not in the circle, but you can still see me.”

“Yes I can,” Greta said, without thinking much about it.  “But it is no good flying off like that.  I will never keep up.”  Greta sighed. “There is nothing else to do.  You will just have to sit on my shoulder and hold on to my hair.  Just don’t pull my hair, Okay?”

Berry gasped and made a lovely little shrieking sound.  “That’s just like the stories,” she said, and she quickly settled down, took hold of Greta’s hair and whispered in her ear.  “Thank you.”

Berry pointed, but then realized Greta would not be able to see from the side of her head, so she spoke.  “Straight for a while.”

Greta started walking as carefully as she could, and she asked, “What stories?”

“Thumpy, thumpy, thump.”  Berry giggled in her ear.  “The stories never said it was such a bumpy ride.”

“Are we going in the right direction?”  Greta tried a different question.

“No, it is back over that way.”  Berry said, and when Greta figured out what Berry meant, they started walking again.

They walked quietly after that for some time while one thought kept running through Greta’s mind. Finally, she asked.  “You’re not a full blood flyer, are you?”

“No.”  Berry instantly lamented.  “My mother was human.  Father named me Berry because he had hopes for me, but I can’t make things grow or ripen at all.”  She had to stop and sniff her little tears.  “I’m just good for nothing.”  She blew her nose in Greta’s hair, but since it was such a little nose, Greta did not mind. “Father left when I was just a baby. His people went off to some new

ground. He said I had to stay with Mother, but then Mother got caught by the Wyvern in the swampland and I have been alone ever since.”  Berry began to cry like a baby, and Greta never felt the need so strong in her life to mother a child.

“There, there,” Greta said as the magic in the fairy emotion made her cry a little with Berry. “Is there no one to take care of you?”

“There is Bogus the Skin,” Berry said and brightened a little.  “He is my Uncle, and I always do what he says, no matter what. Oh, we’re here.”  Berry jumped from Greta’s shoulder and flew off, quickly to disappear among the trees and into the late afternoon sun.

Greta’s stomach growled as she realized how late it was.  It must have been noon by the time she found the fairy circle, and well after one by the time she made her bargain with Berry.  Now, it was probably four-thirty, nearly five.  Greta decided she had no choice but to go and ask for food and shelter from the Bear Clan, whoever they might be.

Greta found what looked to her like a genuine log cabin in the clearing.  There were two oxen in a corral in front of the barn which sat beside, but attached to the house.  Otherwise, there did not seem to be any life about the place.  She sniffed.  She felt no magic in evidence.  Anyway, she told herself, it seemed too late to do anything about that now, and she felt too hungry to go on without a bite of something.  Daniel Boone, here I come, she said to herself, as she marched up to the door.