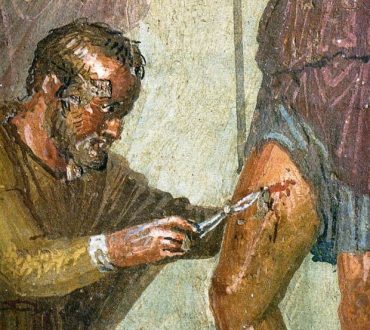 The physician who came with Papa showed contempt from the beginning, but his contempt got abated a little as Greta pointed out his work and named everything he did in both Latin and Greek.  In truth, she spent all that while examining the wound.

Papa stayed respectfully quiet and only said “Ouch,” in the appropriate places. Meanwhile, Hans came in with arms full of moldy bread, and Vanesca returned at about the same time with the water. Greta set them immediately to preparing the penicillin which would be taken orally, though they hardly knew what they were doing, or why.

Papa’s leg had not yet become infected, but it seemed rapidly headed in that direction. She examined Papa’s hands.  When the assassin struck, he missed the target, struck only Papa’s leg; but the sword went to the bone and even cut a hairline fracture.  As Papa cried out, he grabbed the sword and held on to the blade so the assassin could not draw it out and strike a second blow.  Papa demonstrated and explained.  “Then Marcus tackled the man and had him tortured.  That was how we found out about Kunther’s rebellion,” he said, and Greta knew that was also how they found out about the guns.

Papa’s hands did not look to be cut too badly.  They were already healing.  But not every soldier was scrupulous about keeping his weapon clean.  Some blades even developed a keen edge of rust. Soldiers routinely died, not from the wound, but from the infection that developed.  Greta well understood why the Roman physicians recommended removal of the leg.  His chances for survival were not good if he lost the limb, but if his leg turned green, his chances became zero.

Greta finally stood up.  Everyone waited.  “You missed a sliver,” she told the physician.  “Did the sword break?”

“No.” Darius spoke up.  “But it had notches in several places, like a sword that had been in hard battle.  I suppose a piece may have broken off against the bone, isn’t that possible, physician?”

“I suppose it is possible.”  The physician admitted.  “But we can do nothing about that now, certainly not with the wound already closing. The leg is ready to green, and there is nothing we can do about that either, except remove the leg and burn it off and hope for the best.”

“No,” Greta insisted.  “We get out the sliver and then treat the leg against infection.”  She sounded so sure.  “Papa.  You will have to follow my directions for the next twenty-one days.  If you do, you will get well.”  She sounded very stern and he raised his eyebrows.

“I mean it.” Greta spoke with everything she had. “Do you understand?”

They agreed, and as they left, Greta made her Papa drink the sleeping potion.  Then she got a bowl of fresh water and got the physician to start cleaning the wound while she stepped outside.  Marcus paced there, with about twenty men waiting as well as they could.  Gaius mounted and Darius followed.

“You brought up the entire cavalry troop?” Greta asked.

Darius and Gaius looked at each other.  Romans did not easily share such information, but Marcus did not hesitate.  “Three hundred,” he said.  “And about an equal number of auxiliaries and of your own people.”

“Vanesca!”  Greta shouted before Vanesca got out of earshot. “Go fetch Yanda’s father and tell him I need him here, on horseback, and dressed for war, immediately.”

“Immediately!” Greta repeated herself to be sure.

“The whole legion is following?” she asked Marcus.

“Pretty much,” he admitted.  “The legion in Apulum is spread all over the countryside, but VII Claudia is mostly intact and coming up from Vimiacium on the Danube.”

“Take Yanda’s father with you,” she said.  “His name is Hersecles.  He is too old for much of a fight, but he has the respect of all who know him, and that is a lot of people.  What is more, his whole heart is for peace with Rome and against rebellion.  He can replace Eldegard if Eldegard should prove false.  I am not saying he will turn false, mind you.”  Marcus nodded, and Greta felt terrible suggesting it because Eldegard was Drakka’s father.  “I know Papa picked him,” she went on.  “But he was on the fence.  Part of the reason for Papa’s pick was to bring him over to the side of peace.”  She had nothing more to say, and after that, they waited, and waited until Marcus could barely contain his impatience.

“If I had a copper for every time I had to wait,” Gaius quipped.  “Do you know how rich I would be?”  Marcus nodded, but it did not help.

They waited, and the Roman physician came out to report.  “The wound is clean, your father is asleep, and the boy is bored.”  He related things in his own order of importance.

“Fine,” Greta said, a bit sharply.  She felt uncomfortable, not because of the wait, but because Darius kept staring at her. Finally, she could stand it no longer. “What?”  She shot the word at him, and it distracted Marcus for the moment.

“Nothing.” Darius sat upright.  “Did I say something?”  He asked Gaius, not expecting an answer.

“Damn it!” Greta felt unhappy with herself. She wanted to hate herself, but she had to say it.  “Damn it!” She repeated.  “Just don’t get yourself killed, all right?  It wouldn’t be much of a wedding without you. Okay?  I said it.”  Greta felt herself flush red from anger and several other conflicting emotions.

“Bravo!” Marcus shouted.  Then Hersecles chose that moment to show up so she did not get a response from Darius, if he had one. 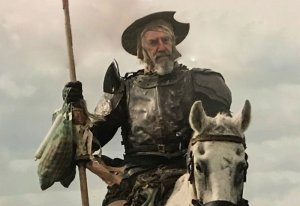 Greta made the introductions and gave Hersecles her instructions before they raced off to catch the troop which was already well ahead of them.

“He doesn’t look like much of a warrior,” the physician noted.

“Better than I thought,” Greta responded, and she brought the physician back inside the house.

Hans sat by the bed watching Papa snore, but the minute they came in he asked the question which had been pressing on his mind.  “Will my Nameless be able to help?”  To his disappointment, Greta shook her head, and then explained.

“This is not a spiritual matter.  It is strictly a matter of flesh and blood.”  Greta saw that the wound looked tolerably clean so she said, “Thank you” to the physician.

“But can you do this alone?” Hans pressed.

“No,” she admitted.  “But Doctor Mishka can.  She is a trained battlefield surgeon and she operated on far worse after Tannenberg, and even here in Dacia, though they did not call it Dacia in 1915.”

“Who is Mishka?” Hans asked, responding on the one thought he grasped from all that she said. Greta could see the same question forming in the physician’s mind.

“Take my hands,” Greta said.  “It is sort of a tradition.”  And she grasped Han’s hand and held the physician’s hand firmly.  She closed her eyes and reached out, not with her mind or heart, but with her spirit, and not in space, but sliced through time, even to the twentieth century.  All at once, Greta no longer stood there.  The Doctor stood in her place and felt much too snug in Greta’s dress.  The Roman nearly ran, but Mishka put her arm out and Hans restrained him.

“My surgical garb.”  Mishka called, and like the armor, it replaced Greta’s dress.  “Better,” Mishka took a deep breath.  “My black bag.”  She called again and the bag appeared in her hand, and she felt ready. 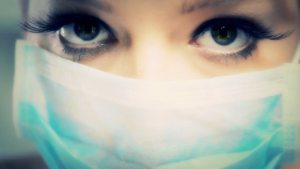 “Doctor Nadia Illiana Kolchenkov.”  Mishka introduced herself to the Roman and shook his bewildered hand.  “Colonel, late of the Army of the Union of Soviet Socialist Republics.”  That was 1945, not 1915.  This seemed an older Mishka than Greta had envisioned.

“Pleased to meet you,” she said.  “Now you must assist.”  She winked at Hans who smiled broadly.  In this one he could see at least a little of his sister.  He could never pinpoint a particular feature.  Even the hair and eye colors were different.  But his sister was in there all the same.  “We make a fine troika,” Mishka said.  “But my brother must finish his potion as instructed, yes?”