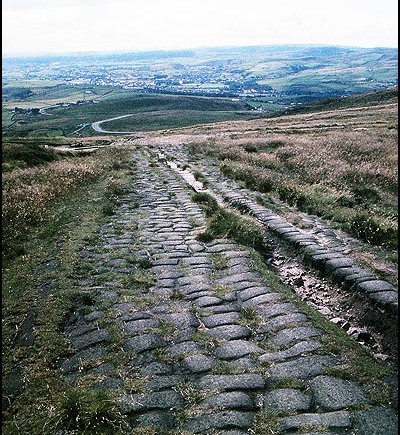 Mirowen and Tiberius had taken it upon themselves to move the wagons forward a quarter mile, to get away from the dead bodies.  They left the Hun’s horses to graze where they stood.  Festuscato found the wagons easily enough, and the troop moved back into position, not really worse for wear.  One man had a cut in his shoulder from one of the two Huns that broke through the trees, but Mirowen had him well bandaged and he was in no danger.

They arrived in the town of Saint What’s-his-name toward evening and found three hundred legionnaires camped on the main field beside the road.  Festuscato thought it wise to bring his men through the town and get them sheltered on the other side.  Something did not feel right.

“Pinewood,” Festuscato got the fairy’s attention.  Pinewood, big sized at the moment, sat on horseback.  “Would you and May please bring the troop to a place where they can camp and not be found.”  He turned his head.  “Four Horsemen.  Help set a hedge around the camp, please.  Marcellus, remember we have passengers to protect.”   He turned his head again.  “Julius and Mirowen will stay with me at the inn, but no one else. I have a bad feeling about this.”

“May has some family around here,” Pinewood spoke up, but he suggested nothing about what that might mean as he turned down an alley with one of the Four Horsemen, Pestilence, Festuscato thought.  The Horseman came back leading an empty horse. 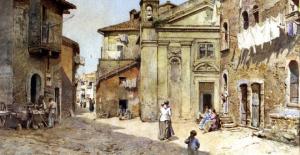 Festuscato and Julius stopped in front of an inn, and the horsemen Death and Famine stopped with them.  Mirowen and Drucilla brought their own horses.  Drucilla said she was not leaving her mistress, but her eyes clearly stayed on Julius.  Festuscato shook his head.   He got two rooms.  Death and Famine opted to sleep in the main room at the bottom of the stairs, if they slept at all.

“What are you thinking?” Mirowen asked.

“I’m not sure. Maybe something the Hun implied.” They got some wine and bread and sat at a table where Festuscato could put his back to the wall.  “Bill Hickok style,” he said and changed the subject. “Lately, I have been having strange dreams about a young, blind girl, and I have felt very maternal toward her, odd as that sounds.”

“But do you know what I mean, maternal?”

Mirowen lowered her eyes.  “No,” she said.  “I was told when I was very young that I would not be able to have children.”

Festuscato smiled warmly and placed his hand over hers.  “And here you had four boys to raise.  Imagine that.”  Mirowen tried to return the smile as one of those boys, Father Gaius, came bursting into the room.

“What’s up? A glass please.  I think you need your confessor with you.”  He pulled up a seventh chair and sat at the corner of the table. 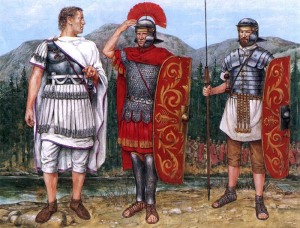 They did not have to wait long.  A tribune, one full of self-assurance came crashing into the room, two soldiers trailing. One of the soldiers pointed and the tribune came to the table.  “Senator Agitus?” he asked, but his voice sounded sharp, not respectful or polite. Julius and the two horsemen stood.

“Welcome. The party has just started.  Join us.” Festuscato spoke up.  He waved to the young maid who had her eyes all over him and she got another to help bring some more chairs.  Festuscato looked at the two soldiers, and one in particular made him shout.  “Dibs!”

Gaius looked up. “Dibs!”  He added his voice.

Dibs smiled and pointed to his insignia rank as Mirowen got up with a cloth in her hand and wiped the poor soldier’s mouth.  “When was the last time you bathed?” she scolded, and the soldier beside him laughed.

“Sergeant Dibs,” Festuscato said.  “Congratulations.  Come. Join us.  Wine’s on me.” Both soldiers looked willing but the Tribune held out his arms.

“That is not what we are here for.”

The tribune looked flustered.  “Senator Agitus.  By order of the regent, Gala Placidia, you are under arrest for deflowering the womanhood of the Princess Justa Grata Honoria.”

“No, I am sorry.” He turned to the men who had their mouths open, Drucilla who covered her face with her hands, and the horsemen who focused on the intruders.  He did not look at Mirowen’s frown, but he felt it burning his skull.  “That is not true.  She was deflowered long before I got there.”

“Lord Agitus is Comes and Legatus Augusti pro Praetore per Britannia,” Julius said, calmly. “He answers only to the Emperor Valentinian.  The former regent has no authority here.” 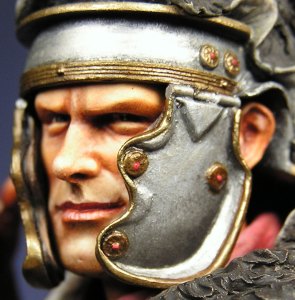 The tribune started to lose his cool.  His face turned red.  “Centurion. You will report to the officer of the day so you and your men can be fit into the normal rotation.”  It sounded like a command from a man who was not used to be being contradicted.  He dropped his jaw when Julius shook his head.

“My men and I are assigned by the emperor himself to serve the governor of Britannia.  Even General Aetius cannot change that without direct authorization from the emperor.”

The tribune yelled.  “Your duty is to the empire.”

Julius retained his calm attitude.  “Valentinian is the empire.”

The tribune broke and started to reach for Festuscato, but his own soldiers grabbed his arms and held him back.  Festuscato stood.  “I tell you what.  After a good supper, a good night’s sleep and a fine breakfast, you can arrest me.  I will pledge to travel with you to wherever, and I will take only my governess and my father confessor with me.  You can assign Dibs to guard us on pain of crucifixion if he lets us escape.  Besides, there are some things you don’t know.”  He raised his voice.  “Family of May.  Here, in small form on the table, please.”

A young fairy came warily down from the rafters and fluttered to the table.  She looked very reluctant, like this was not what she expected to be doing.  “Don’t be afraid,” Mirowen said, with a smile for the young thing, and the young fairy returned the smile.

“Miss Lilly,” Festuscato also smiled for the little thing.  “Would you tell Lady May and Lord Pinewood please to bring the troops, passengers and wagons by secret ways to, um, where are we going?”  He asked the tribune.  The tribune had his mouth and eyes open as wide as they could be, and looked ready to scream and run at any moment, but his own soldiers each had an arm and held him steady.  Dibs whispered in his officer’s ear.

“Courage.” He turned to Festuscato. “Orleans.” 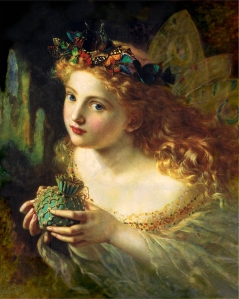 “What?  Not Paris?  Darn.”  Festuscato returned to look at Miss Lilly.  “Please ask Pinewood to bring everyone to Orleans by secret ways.  We will get there eventually.”

“Yes, my lord.” The fairy curtsied, and with a quick glance at Mirowen who nodded, she flew off through the nearest window and was gone.

“Drucilla,” Julius spoke.  “We should get back to the men before they leave without us.”

“Yes, Julius,” Drucilla said his name, like she enjoyed saying his name.  “They will wait for us.”  They held hands as they left, and no one stopped them.

“There’s a pickle,” Festuscato sighed.  Mirowen wisely said nothing, but Gaius took his seat with a word.

“Young love should not be a pickle.”

Gaius nodded and pointed at Mirowen.  “Sibelius too?  I suspected, you know.”

Dibs and his fellow soldier let go of their tribune when he seemed to come back to his senses. “I order you to be arrested.”  The tribune whined like a baby.

“After breakfast, when your men are ready to move.”  Festuscato said.

The tribune stomped his foot.  “Guards will be posted,” he yelled and spun around to march out the door.  Dibs and his companion fell right in step behind, and Festuscato voiced a thought.

“If he has Dibs and his friend whipped for any reason, I’ll have to kill him.”

No,” Death grinned in a wicked way as only an elf can grin.  “That will be my job.”  Festuscato stared.  It was the first time, to his knowledge, one of the Four Horsemen actually spoke in public.

Later that evening, the young barmaid collected Festuscato and took him to her room.  She shut the door before she whispered, “That was a real fairy.” 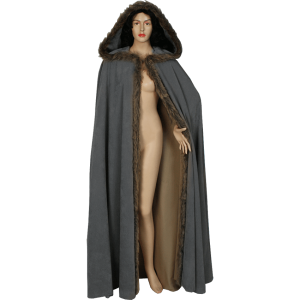 Festuscato nodded, but he wondered what it was about young girls and fairies, ponies and unicorns.  Greta certainly had no delusions.  “Emotional roller coasters,” Gerraint said, in Festuscato’s head.  “I bet this one giggles.”

Festuscato got ready to answer when the girl unclasped her dress and let it fall to the ground.  He thought to answer the girl instead.  “You can ask Mirowen all about fairies.  She is an elf.”

The girl stepped up into his arms.  “I thought she was too beautiful for an ordinary woman.”

“Exactly what I thought when I first saw her.”