Festuscato cut the centurion off and put his hand out for the papers.  The man handed them over, and then Festuscato had to gently slap Mirowen’s hand and hunch over to keep Gaius from reading over his shoulder. He read quickly and handed Mirowen the papers.

“It seems we have an audience with the Emperor.  It suggests we may be sent to Britain, though I cannot imagine why.  So, tell me, when Mother says jump, does my old buddy Valentinian still ask, how high?”

The centurion smiled, but wisely did not answer that question.  Fortunately, food and drink started to arrive.

“Ah, good.” Festuscato said.  He helped set the trays down so the girls could scamper off to fetch more.  “You should bring your century up on to the property.  I suspect we will be a while, packing.”  He nodded toward Mirowen and winked.  The centurion understood.  Mirowen simply returned the gentle slap on Festuscato’s hand.  Festuscato ignored her and continued talking.  “Besides, I want to see the expression on Velleius Fulvia’s face when he sees I have my own century.  I bet he runs right out to get one.”

“It is a game they play,” Mirowen said, as she handed the papers to Gaius.

“Sir.”  The old man came out from the corner where he had been hiding in the shadows, listening to every word.

“See if you can open a keg of that special ale when the century gets settled.”

Gaius handed back the papers.  “It definitely suggests Britain.”

“We will have to see who among the tenants and such might want to go home.”

Mirowen spoke plainly to the centurion.  “It will take at least a month to close up our affairs here and pack for the journey.”

The centurion nodded.  “The former regent suggested you might need two months.”

“Don’t say it.” Festuscato was not fast enough.

“Too late,” Gaius confirmed, and Mirowen took the full two months to get ready.

Festuscato spent the time getting to know Julius and his Sergeant Marcellus, usually in a martial way.  They had practice swords, rode with spears where they stabbed at targets, wrestled in the Greek style, and practiced with their bows.  Julius needed the work-outs.  He was in danger of becoming a lazy officer.  Marcellus seemed fairly young for a sergeant, in his early thirties, but a proficient soldier who privately appreciated Festuscato getting his centurion in shape.

Marcellus was short and broad-chested.  The men said he always won at wrestling.  Festuscato ended the man’s winning streak with a couple of judo throws and holds, and just enough aikido to keep the bear hug at bay.  With the sword and spear, they were all on more even ground, but Festuscato could ride like he became part of the horse, and the horse would respond and do things that some said they never saw a horse do before.

It started roughly six years earlier, at age sixteen.  Festuscato suddenly found the idea of hunting exciting.  He found his horse responsive to him in a way it had never responded before.  And he found his ability with a bow and arrow unequalled among men.  Mirowen said he even surpassed her, though he disagreed. He never saw anyone as good as her. 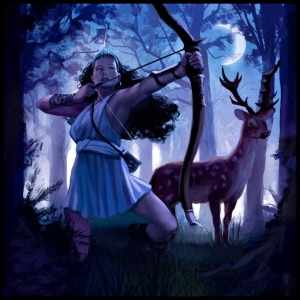 Festuscato pondered his sudden near superhuman abilities for a long time, until he remembered Diogenes and the Princess were what he called genetic reflections.  He understood that every life he lived had a genetic reflection somewhere in history, and he concluded that his female reflection must have been gifted, possibly by the goddess Diana herself, somewhere in the deep past when she turned sixteen.  He marveled at what he could do, and he was just reflecting her gifts. He could not imagine what she must have been able to do.  He tried to find her in the time stream, but she seemed cut off from him at present. That felt typical.  Out of more than one hundred and forty lifetimes, Storyteller’s estimate, he would probably only remember twenty or thirty in his lifetime.

The century had a man, Tiberius, who had been best with a bow.  Festuscato fired an arrow which knocked Tiberius’ arrow aside in mid-air. With hardly a breath, he shot a second arrow which struck the bull’s-eye dead center.  To be sure, Festuscato spent most of those two months working with the century, on their skills and getting them in shape.  Those forty men, hardly a century, claimed to be misfits and leftovers.  They weren’t by the time they marched into Ravena.

Festuscato got called to an audience with the Emperor as soon as he arrived.  Julius and Mirowen went with him, though Mirowen complained at not being allowed to unpack.  Julius saluted and introduced them.  Mirowen curtsied and stayed down until invited to rise.  Festuscato looked straight into the scowling face of the Emperor and defied etiquette as he spoke before spoken to.

“Valentinian, my old friend, how have you been?  I see you have grown well, and married, I understand.  Good or you.”

Valentinian’s face turned from scowling to curiosity.  “We have met before?”

“Of course. In the Curia in Rome.  I was nine and you were almost seven.  I remember that.  Almost seven.”  Mirowen’s hand reached up and pinched Festuscato in his side to get him to shut-up. In that moment, the scowl moved to Galla Placidia’s face, one step down from the throne, but the light came to Valentinian’s face.

“Festuscato. I knew that I knew the name Agitus.” He glanced at his mother as he stood. “Good to see you again.  Did you marry?  Is this your wife?  Please rise.” Mirowen stood and the scowl on Galla Placidia’s face got temporarily interrupted by a gasp.

“Alas,” Festuscato shook the Emperor’s hand.  “Mirowen remains my governess, though these days she prefers the name, housekeeper. She really spends most of her time trying to keep me on the straight and narrow.”  He winked at the Emperor.  “Not married,” he sighed.  “I’m afraid no young woman in Rome will have me.”  He turned to whisper.  “Though I have had a share of them.”  He returned to a normal voice.  “And this must be your wife.”  He went to the obvious seat at the right hand of the throne where a young woman fidgeted.

“Licinia Eudoxia,” Valentinian showed her off.

“Festuscato,” he introduced himself and offered a slight bow before he noticed she was seriously pregnant.  “But wait. Don’t tell me.”  He put one hand out and made noises that would make a carnival owner proud.  “I see. I see a little girl.”  He smiled.

“Are you a seer?” Licinia asked, with genuine interest.

“Sadly, I am a guesser, but I have a fifty-fifty chance of being right.”

Valentinian smiled and leaned over to his wife.  “If I remember right, I think Festuscato sees more than just about anyone.”

“Speaking of which, I must give my greetings to your mother.”  Festuscato looked at the Emperor who had a question in his eyes. “Must be polite,” he said, and Valentinian acquiesced.  Festuscato saw Mirowen with the former Regent.  Galla Placidia appeared to have tears in her eyes.  The young woman, obviously Valentinian’s older sister, comforted her, as did Mirowen.  Valentinian stood back to watch, expecting fireworks.