Jill smoothed her long, straight black hair as they walked across the street toward the town hall.  She was glad they had not been handcuffed, or worse, but then the three big men with their guns drawn were more than enough to convince her not to cause any trouble or try to escape.  Ethan watched Jill fix herself and apparently thought that was a good idea.  He brushed off his suit jacket and ran his fingers once through his own curly brown locks before they entered the hall and came up to the big courtroom door. 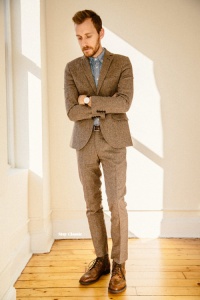 “Come in.”  A man in a plain brown suit met them at the door and escorted them to a table.  There was a second table alongside their own where a second man in a plain brown suit looked over some papers.  Ethan’s briefcase was present and open, on a display table in front of a high desk at the very front and center of the room.  The laptop, paper and pens were all laid out on that table in a neat retentive row.

“At least it doesn’t look broken,” Jill remarked casually.  Ethan nodded and smiled as he sat down beside her, but at the moment, Jill could not imagine how they were going to get hold of their ticket home.

After a short delay, three men came in from a back room and took seats behind the high desk.  Other men followed them in from the back and sat in what looked like a jury box.  The man up top who sat in the center, the one Jill figured had to be the head judge, carried a file and pulled out a piece of paper to read it over before beginning the trial.

Jill tugged on Ethan’s arm.  “That collar.”  She all but pointed at what Ethan indicated he had already seen.  All three judges wore a choker that glowed a dirty green color, like the dimmest fluorescent bulb.

“I thought they were merely a symbol of office and shrugged it off,” Ethan said.

Jill quickly corrected his thinking.  “Those are mind control collars.”

“What?  Who?”  Ethan whispered back.  “Not the technology of this world.”  Ethan understood that much.

Jill shrugged.  “Any of a dozen or so peoples,” she said, and Ethan’s eyes widened.

“I had not realized that traveling through parallel universes was so widespread.”

“You are Ethan and Jill Lugas?”  The judge in the center spoke up and gave the couple a stern look.

“Oh yes, your honor.”  Ethan stood and produced his friendliest smile.  Jill remained seated so he glanced down at her.  “It is Lucas.”  He offered the correction and the judge duly made a note.

“You are Anglish?”  The judge asked.

Ethan looked down again.  Jill nodded.  “Yes, your honor.”  He said before he sat as the man in the plain brown suit rose and pushed on Ethan’s shoulder to get him into his chair.

“You have been accused of spying for the Anglish.  How do you plead?”  The head judge looked bored and Jill knew that was not a good sign.  Their man in the brown suit, the defense attorney, started to say something about extenuating circumstances, but Ethan interrupted.

“Not guilty.”  He said it rather loud and stood up again.  “I have never heard of anything so ridiculous.  Say!  Why have we been kept in jail?  We have done nothing wrong except visit your beautiful country.  You have lovely people here who were very kind to us, but now we would just like to get our things and go home if you don’t mind.”  It was a good little speech, which dropped the jaw of their attorney, but the gavel interrupted it.

“Another word and I will have you gagged.”  The Judge meant it.  Ethan sat down and drummed up a very bewildered look.

“Didn’t I see you on Broadway?”  Jill teased quietly.  “Too bad it won’t do any good.”  She pointed again at the collars.

The attorney looked at the couple, shook his head, and frowned.  “Not guilty, I guess.”  He did not sound at all confident.  He sat back down, and after that, he would not look at them, much less talk to them.

“Bother!”  The judge on the right looked like he was late for his luncheon date.

There were witnesses first, none of whom Jill or Ethan had ever seen, and they said all kinds of things that made no sense.  Then Lars got to speak.

“No,” he said, honestly enough.  “They did nothing nor said anything to make me prove them spies.  There were only circumstances, and some curious things.”

“For instance?”  The other plain brown suited man, the prosecutor at least took his job seriously.  Jill looked briefly at the defense attorney and wondered when the snoring was going to start.

“Well, I just happened to find them in the field where the militia has been at maneuvers.  God knows we all hope there is no war, but it seemed coincidence to me.  And then Ethan, Mister Lucas,” he pointed, “was awfully curious about maps.  He said he always liked maps since he was young.  That could be.  I do not know.  But then he came in the night looking for telegraph wire.  Maybe he has got some secret way of sending messages.  I am not saying he has, but who can say?  Those Anglish are clever, always coming up with new things.”

“Tell the judges why I wanted the wire.”  Ethan shouted despite the mean stare from the head judge.

Lars guffawed.  “He said he wanted to tie the witch to the bedpost.”  Jill stomped on Ethan’s foot under the table.  A couple of the men in the jury box snickered, but the judges did not even blink.

The prosecutor released Lars and turned on Ethan.  “Mister Lucas, please tell us about this spy equipment of yours,” he said.

“It is not spy equipment.”  Ethan erupted, like he had been waiting for his chance.  “I’m a writer.  The paper and pens are my job.”

“Also good for drawing maps which you like so much and making notes on an enemy’s strengths and weaknesses.”

“Nothing of the kind.”  Ethan clearly spoke with as much exasperation as he could muster, and it was not hard to muster a lot.  “Look.  I have spent the last few months in love and getting married.  I don’t know anything about wars or peace or anything of the sort, and for my wife it is even worse.  You know how it is for women.  Total preoccupation.  At least it is a big deal where I come from.  I tell you, we had no idea we were anywhere other than in a field, under a clear sky with the birds singing.  What else do newlyweds think about?”

“Enough!”  The center judge shouted, but Jill saw that Ethan got through to at least some of the men in the jury box.  Maybe they had jumped to conclusions a bit too quickly.  Maybe this was a case of innocent people being in the wrong place at the wrong time.

The prosecutor was not moved.  “And tell us about this strange black box.”  He said.  “A communication device?  A bomb of some sort?”

Jill had foolishly hoped that they would not ask.  Ethan looked at her with uncertainty in his eyes, so she stood.  “All right.  You have us,” she said.  It was a big risk, but Jill saw no alternative.  “But not in the way you think.  This is called a laptop computer, and it is something way beyond the technology of your world.  You see, we were visiting you, in a sense, but not on behalf of the Anglish.”  She stepped to the table, opened the computer lid and turned it on.  “The truth is, we are simple explorers, but something has gone wrong with our equipment so we are stranded here.  We needed the wire to fix our machine so we can go home, that’s all.”

Everyone in the courtroom looked stunned to silence.  Even the prosecutor stood speechless before the impossible fairy tale he was hearing.

Ethan went to join Jill, told her the sequence and typed in his password.  Jill continued to speak while the computer booted up.  “This device simply helps us gather and store information, and it will help us return home if we can get some copper wire that is thin enough.  In fact, if you had some telegraph wire right now, I could prove it.”  She put out her hand to invite them to let her give a demonstration.

Ethan held his breath.  Jill still had the dimensional watch in her pocket along with the metal plugs she had shaped.  The men who ran the jail decided not to frisk the woman, though neither she nor Ethan could imagine why not.  Now all she needed was the wire and a few moments to connect the laptop to the watch, and to type, and they were gone, at least theoretically.

“No.”  It was not to be.  The head Judge’s face blistered with anger, and Ethan took the next few moments to shut down the computer to preserve the battery, hopefully for a later time.  The judges did not confer so much as simply share a look.  They looked at the men in the jury box as well, but clearly discounted any dissenting opinion and did not ask for their opinion in any case.

“This court finds you guilty of spying.”  Despite the evident anger, the head Judge spoke in a very flat voice. “The sentence is death by hanging.  Sentence will be carried out at sunrise.  Court is dismissed.”  The judges left, together.  A few of the men left as well, but most stayed, like they were too stunned to move.  It seemed the men in the jury box were as surprised as Ethan and Jill, and so were the guards, and the defense attorney, and the witnesses.  Even the prosecutor had a look on his face that suggested that the sentence was excessive.

“Come.”  One of the guards got their attention, even as Ethan closed the computer lid and finished reloading all of the so-called evidence into his briefcase.  He carried the briefcase with him, and no one objected.

They were locked in again, and sat side by side on the cot in their cell.  They had everything they needed to get out of there except the wire; but Jill was not for giving up.

“Someone will come.”  Jill insisted.

“Did you see the stunned look on all of those faces when the sentence was pronounced?”

“Someone will come, and with the wire.  They will come out of curiosity if nothing else.”

“Want to make love while we’re waiting?”  Jill could not believe those words came out of Ethan’s mouth.  She hit him in his arm, but not as hard as the night before.