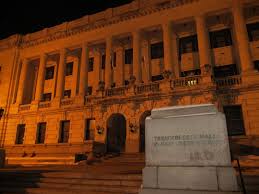 Riverbend made her warriors dress for battle and hid them around the entrance.  Maggie Holmes quipped to Trooper Scott.  “I don’t know why she said I was in charge.”  They were just inside the main door of the administration building which Riverbend cracked open to speak to them.

“Now a little elf magic,” she said, and gave the signal.  The security people were coming to the door down one side of the building.  The other men were coming from the other direction.  There were trees and bushes that lined the walk on both sides and Riverbend could not help a giggle thinking about it. 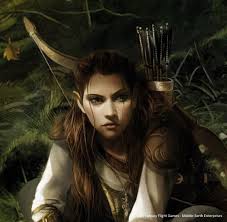 The State Troopers heard one of the elves shout with what Riverbend called directed sounds.  It sounded male and only went where it was intended.  “Quick, there are men trying to block off the entrance.”  This was followed by the sound of gunfire.

The words in the other direction were, “Quick.  Security people are trying to block off the entrance.”  More gunfire sounds, and the elves made sure they stayed hidden, but with their bows ready.

Exactly on schedule, both groups of men reached the walkway at the same time.  Guns blared and men fell while most backed up to the trees and bushes. There was a veritable rain of bullets across the brick walk at first

Maggie looked at her phone and shook it.  “Come on, Carmine,” she said.

“Better to call Ms Nicholas,” Sebastian said.  He had his gun ready but was content to watch the fight and not inclined to get into it.

“I called Nicholas, but Troopers are harder to get in off the highways.  Carmine is the local.”

“But you called before the fight started,” Riverbend pointed out.

“Just as soon as I knew what was up,” Maggie admitted.

The fire rate slackened after a short while.  One of the drug dealers tried to sneak up along the side of the steps.  He took an arrow and fell, but that was just before a ton of local police came roaring up the back street, lights and sirens blasting. 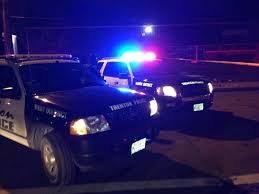 “Idiots,” Maggie called them as the fight abruptly ended and men scattered to escape.  Sebastian called on his radio.  There were a couple of State Troopers on the street.  “Make for the library parking lot.  The drug dealers have a car and a van parked there.  And hide if you plan to catch them, you light and siren freaks.”  He saw Maggie smiling at him.

“I believe my rookie is learning.”

“Given the company I figure I better learn fast.”  He pointed at Riverbend.

All they could see were the eyes beneath the helmet, but they were expressive.  “What?” Riverbend asked, suggesting she had no idea what they were talking about.

Maria and Linnea were very busy with the wounded and Melissa and her and Amina’s elf friends helped as much as they could.  Amina herself was kept back in case they needed her particular skills later on.  She tried not to see what was going on, but she couldn’t help anticipate the casualties as they came in.

“A broken leg on the elevator.  Missing fingers coming down the stairwell from the top floor,” she said, and every time she said something, she closed her eyes and shook her head.

Mindy and Arwen were guarding the front hall, but it seemed more like they were arguing about Alexander the Great.  There were others, including Sara’s friend who was berating herself for not being up there with Aurora.  “I should have stayed with the priestess,” she kept saying.

Officer Dickenson pulled in front of City Hall and turned off his lights and siren.  He was surprised that Ms Riley, who drove her own car, somehow got there first.  In fact, Roland was already in a conversation with the two police officers outside the main door.  They kept repeating that City Hall was temporarily closed.  They said it was electrical problems until the lights came on.  Then they said it was a gas leak.

Jessica, Fiona and Harmony got to the argument first as Latasha waited for Officer Dickenson to get a shotgun out of his trunk.  Jessica interrupted the argument with a finger pointed at the police officers.  “If you two shoot the ogre you are going to be in big trouble.”

Harmony paused to call her troop in battle ready armor, and now that the front lights were on, the police officers saw everything.  Harmony changed her fairy weave clothes to armor, picked up her helmet, grabbed the spear and shield the others brought for her and marched her troop inside.

“Now?” Fiona asked.  She had opted to remain in hunter’s garb.

“Now,” Jessica agreed, and they each grabbed one of Roland’s hands and dragged him through the opening to Avalon before it closed.

Boston put her hands to her hips.  “Hey!  That’s my husband.”  Officer Dickenson headed for the front door, dragged by an impatient Latasha.  Latasha was not about to miss a chance to get a ghoul, but Boston used the opening to follow.  “My student,” she said, pointed and hustled. 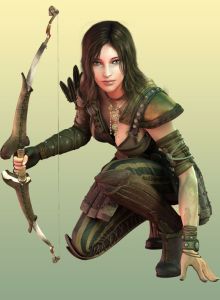 Out front, the two police officers stood quietly until one asked, “What did she mean, ogre?”.

Once on Avalon, Jessica felt the queasiness in her stomach so it was up to Fiona to act when Roland protested being dragged off against his will.  They were in a big room with enough tables and chairs to double for a high school lunch room.  Roland slammed his hand down on a table.

“But Commander Falcon will listen to you,” Fiona said, and Jessica moaned either because her stomach was churning or Fiona said the wrong thing.

“Over here, Roland.”  The Commander was sitting at one of the back tables.  “I was beginning to wonder if the women were ever going to ask for my help.”  He whistled and the wall of the building vanished to reveal some three hundred spirits of all shapes and sizes fitted out for war.  They were spaced out across a great lawn, and they were looking impatient.

Back in City Hall, Latasha was not content to wait for the elevator.  She was moving up the stairwell with abandon when Officer Dickenson stopped suddenly and raised his pistol.  He looked ready to kill Latasha, but the ghoul that reached for his mind made a big mistake going after the big man rather than the women.

Boston’s orange magic snaked out rapidly into the stairwell.  It froze Officer Dickenson in place so he couldn’t shoot anyone or anything, and it showed two ghoul feet and the nappy hair on top of the ghoul head.  That was all Latasha needed.  One great leap and one swing of her ax and they heard the clunk, clunk, clunk of a ghoul head rolling down the stairs.

“I got one,” Latasha said when she landed on her feet and watched the ghoul shrink down to a purple spot.  She had been afraid she was going to miss all the fun, but then some twenty dwarfs, elves and other assorted people pushed up past them, some tipping their hats as they went, and Roland caught up to them.

“They filled the basement first so the ghouls couldn’t go to ground.  Now they are clearing out floor by floor to the roof.” 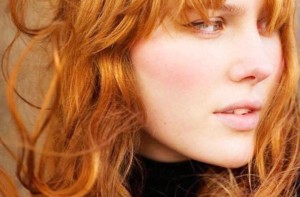 “What do you mean go to ground?” Latasha asked as she nudged Officer Dickenson to help him clear his head.

Boston explained.  “Most creatures that have low or no tolerance for the sun can dematerialize at dawn and sink into the earth.  Many can then move through the earth until they get to a cavern or cave or place they can wait safely until sunset.”

“So every little kid who is afraid to go down into the basement may have a good reason.  Maybe there is a ghoul or ogre hiding in the corner.”

“Troll,” Boston corrected him.  “Ogres don’t entirely mind the sun.  It would be a troll in the corner, or a goblin.”