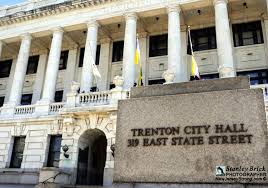 Sara got to city hall a little after five.  Paul was working on a brief for the Mayor.  The Mayor, of course, was home relaxing along with most of the people in the city administration.  It was only people like new, young lawyers in the prosecutor’s office that usually worked late.

Sara came with her shepherd’s crook in her hand.  She was uncertain about the weapon at first, and Heinrich made it clear it was a weapon even if it was only used to protect the sheep from beasts in the wilderness, but lately she had come to think of it as something like a security blanket.

She was dressed in her fairy weave gift from Avalon—her long white dress over boots and her white cloak with the hood over all.  She was determined to tell Paul everything and thought the fairy weave would serve for evidence when she turned it pink and then green with a mere word.

Ben, the security guard at the front door did not recognize her at first.  When he realized who she was he said, “Wow, er, Reverend Michaels.”

“I’m just here to totally interrupt Paul from whatever work he is doing,” she said.  He buzzed her in with a whisper that it should not be hard, and he watched her all the way to the elevator.

When she reached the third floor, she had to walk carefully around the wet floor sign as she smiled at the cleaning crew.  They didn’t smile back, but she did not expect them to.  When she reached the corner office where Paul often hid while the cleaners worked, she paused.  She steadied her heart and mind while her lips said a small prayer for serenity, and she went in without knocking.

“I—.”  He looked very tempted, but swallowed.  “I have to finish this for the Mayor.  Give me about an hour.”

“No Paul.  I have a confession and it must be now.”  Sara was still standing in the doorway and it occurred to her if he could not stop long enough to listen she would probably leave and not see him again.

Paul still hesitated, but at last he pushed back his computer keyboard, sat back in his chair and folded his hands.  “I’m listening.”  Sara closed the door, sat across the desk from him and took a moment to fold her hands in her lap before she began.

“It has to do with the young women at the University I told you about, the ones who style themselves as an Amazon tribe.”  Paul looked skeptical and Sara worried her hands.  “It is an anomaly in this age, I know, but the truth is they are a real Amazon tribe sanctioned by the goddess Zoe herself, and they can all do things that no ordinary human being can do.”

“And so can I.  They call me priestess.”  Sara said pink and her dress and cloak changed to that color.  She said blue, and with the change Paul’s mouth opened wider but no words came out.  She changed her clothes back to white and spoke to him again.  “Right now you just need to listen.”  She talked for an hour and told him many things but found herself still holding back on many details, and some things like Avalon she hardly mentioned.  When she took a breath, she felt she had conveyed all that was most important.  Paul remained silent and thoughtful.  At least he was not freaking out.

Sara looked out the window.  The sun was just down and she honestly could see nothing but darkness, but Paul joined her in looking at the glass and her reflection in the glass.  She felt sure he would say something in a minute, but a minute was all it took for the lights to sputter and go out.  Paul’s first concern was his computer which dimmed and went off.

“Damn it!” he said.  “I didn’t get that saved.”  Sara did not mind the swearing.  It was very human.  Then they heard a scream out in the main room and both jumped to the door.  Paul looked at her.  “I’ll just check it out.  Stay here.”

“No.”  Sara grabbed his arm.  She was feeling what she could only describe as the presence of evil.  “Wait.”  She opened the door carefully.  There was a person not far from the door, just visible in the emergency lighting.  They recognized that the person was not a human person when they realized he was eating someone’s arm. The person noticed them and started toward them.  Then they saw it for the creature it was, full of caws and fangs.

Sara yanked Paul behind her and yelled.  “You shall not come in here.”  She slammed the butt of her shepherd’s crook on to the rug and while it made no sound, a brilliant light emanated from the Priestess.  The creature backed up and threw its arms up to cover its eyes while Sara quickly shut the door.  She pulled out her phone and once again Paul appeared speechless.

“Lisa,” Sara spoke and leaned against Paul’s desk.  “The ghouls have taken over city hall.”  She covered the phone for a second.  “Detective Schromer.  You met her.”  Paul nodded.  “Nice husband.  Maybe we could double sometime.  Give you someone to talk to.”  Paul shook his head before he thought and shrugged but then Sara was talking again.  “No, I don’t know how many and I am not leaving this corner office to go out and count them.  Fine.  I’ll keep the phone handy.”  She hung up, put the phone on the desk and took hold of her shepherd’s crook again.

Paul shrieked like a little girl.  There was a claw sticking up through the floor and it had grabbed hold of his ankle.  Sara smashed the claw with her crook and something like electricity traveled down the wood.  They heard a horrifying scream from below as the claw began to shrivel and it was rapidly pulled back beneath the floorboards.

“You might want to get your feet off the floor,” Sara said as she shoved things out of her way to sit on the desk.  Paul went for his desk chair and pulled up his knees.  He spoke after a 360 degree inspection of the floor area, only possible because Sara was glowing.

“This kind of thing happen often?”

Sara smiled at the feeling of liberation.  Right then she could tell Paul anything and he would have to believe her.  “No.  I wouldn’t say often.”