It was dark when Emily left her study group in the library.  She normally did not think twice about walking home in the dark, but there was an early spring chill in the air which made her turn up her collar, and she shivered.  It was a straight path to the dorm, beside the science building with the main classroom building, Gorgon Hall on her right.  She had to go down a small hill and through a couple of dark patches where the trees obscured the walkway lights, but then she was in dorm land and only needed to cross the street to get to her suite.

Emily paused in front of the science building.  She pushed her collar up again against the feeling that someone was following her.  She tried to look back as she reached in her purse like she maybe left something in the library, but she did not see anyone behind her so she took a deep breath and passed it off as imagination. 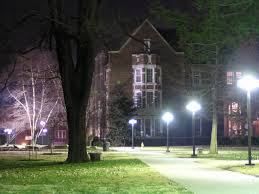 A young couple burst through the science building doors and headed toward the library.  Emily watched for a moment and felt like she wanted someone to laugh with and hold their hand.  She sighed and looked and saw no one back there, so she started walking again.  Someone was following her.  She could run, and outrun any normal person, but as she came to the slight hill that went down to the street and moved into a dark area, she had another thought.  She slipped behind a tree and held her breath.

She was sure whoever it was, or whatever, it was definitely following her.  She imagined it paused at the top of the hill where it could not see her.  She wondered who it might be.  Riverbend was likely resting or for once doing as she was told—helping Lisa track ghouls.  She could not imagine it, but she supposed Riverbend might have assigned another one of the elf maidens to temporarily take her place.  But no, Emily thought, no elf maiden would be that obvious.

Emily heard a sight growl beside her and felt a rock-hard fist in her shoulder before she could turn her head.  She flew across the walkway and slammed hard into a tree.  She was hurt from one punch and when she looked up she was not surprised to see a monster of an orc step out into the dim light.

There was someone on the path, running.  The person leapt and he had a knife in his hand which got shoved deep into the orc’s neck.  The orc grabbed the young man with one hand around the waist and squeezed.  The man arched his back and moaned as Emily heard bones break.  Then the young man was tossed away like a rag doll.

The orc reached for the knife in his neck and pulled it out with a great roar.  But by then, Emily had out her knife and came up from beneath to shove her knife in the orc’s belly and up toward the heart.  The orc backhanded her, and mostly missed, but even at that Emily felt it hard enough to be seriously hurt, and she was shoved again across the walkway to crash and slide across the bricks on her back.

As the orc tossed away the knife from his neck, somehow the young man grabbed it.  Emily was astounded.  She thought she gutted the thing, and it was bleeding terribly from its neck and belly, but it seemed her cut through the abdomen only hit muscle.  The knife fell out as the beast turned on her.  She staggered to her feet.  But then the young man managed a miraculous leap on to the orc’s back, though his ribs had to be broken.

The orc got the knife again in the neck, on the other side of its head.  It roared again and jumped backward to crush the young man into the tree.  Emily heard the big old tree crack from the weight and force exerted, and she moved in again, retrieving her own knife as the orc turned to tear the young man apart.  It roared again and Emily shoved her knife into the orc’s mouth, reaching from behind.  The backhand came again, but this time Emily ducked and rolled away.  She moaned.  The roll made it clear that she was hurt everywhere.

The orc turned on Emily once again, but it stood to spit and try to disgorge the knife from its mouth.  It made great hacking sounds before an arrow struck it in the chest.  Two more arrows struck the heart area and the beast fell to the ground to roll and grasp at the shafts.

Emily crawled over to the young man by the tree.  She was sure he could not possibly be alive.  She gasped when she saw him.  It was Pierce’s younger brother.  There was a flicker of movement and recognition in his eyes

“I’m glad you loved him.  I’ve got a baby sister.  Save her,” the young man said before the last of his breath went out of him.

Emily turned, though it hurt to turn.  She saw a male elf making sure the monster orc was dead.

She saw the female elf at her side, and the elf yelled at her.  “I ordered Riverbend to stay with you.  You have no business sending her off to help Detective Lisa.”

There was something in the way the elf said Detective Lisa that sounded familiar, but Emily could not think about that just then.  She was busy passing out.

Emily woke a short while later, in her dorm and in her bed.  Maria was there having tea with the elf healer, Linnea.

“Must have been a monster,” Linnea said.  Emily could only nod.

“Nothing broken,” Maria reported.  “But you have to be banged up bad.”

Emily nodded again as Riverbend came to the door and came into the room, crying.