Eleven women followed Riverbend and stepped from this world to that world.  Fiona, the elf huntress was there along with eleven elf warriors, all women dressed in tall leather boots, skirts of fine chain mail and helmets that covered all but the eyes and mouth.  They carried swords, knives, spear-like lances, the inevitable bow, and wore soft green cloaks with the hood down overall.  They looked formidable, but the Amazons could hardly appreciate that fact.  They were all busy feeling sick, dizzy, and like they were dying or had already died.  Those feelings passed soon enough, but by then all eyes were turned to the tall and stately beauty of the woman who approached across the lawn of soft, green grass.  The elves dropped to their knees and lowered their eyes, but the Amazons hardly knew what to think.  Emily saw a golden light buzzing around the woman’s head, but before the woman arrived it vanished into her golden hair at the shoulder.

“Welcome.”  The woman’s voice was as beautiful as her person, and what is more, she was framed by a perfectly blue sky and a magnificent castle which stood on a hill some distance away.  “I am sorry but there is nothing I can do about the transition between Earth and the Second Heavens.  Some find it rough, but the feeling passes.  Are we all here?”

Emily looked around and saw that the others were waiting for her to answer.  “Yes,” she said.  “All that are coming.”

“And it is all that were invited.”  The woman smiled and the smile was dazzling, warm and lovely.  “I hope you will have time to rest here. But I know the urgency of your task must come first.”

Jessica was feeling like she just moved from Earth to Oz.  The colors of Avalon were more colorful, somehow, than any of the colors back home.  In fact, back home was so drab by comparison she felt like she just went from black and white to color.  “The Good Witch of the North?”  Jessica could not hold back the words.

“Alice,” the woman introduced herself.  “And welcome to Wonderland.  This is the place for my little ones, where the spirits of the earth can come to rest from their labors.”

“In the Second heavens?”  Sara made her statement a question.

“Yes, Sara.  The first heaven is over the Earth as you know, and the third contains the throne of God, even as Uncle Paul wrote to the Corinthians.  There is paradise in the third heaven.  These second heavens are the place between.  Matter, energy, and even time work strangely here and it is layered like a fine French pastry so many think there are seven or more heavens here but it is really all one.”

“But—” Melissa started to speak, but Alice interrupted.

“Now, Melissa.  You above all know how Mister Hawkings postulated parallel universes.  This place does not qualify, exactly, but you surely grasp the concept.”  Alice waited for the next outburst, but the women fell silent so she spoke again.  “Well, Commander Falcon, what do you think?”

“I think they will likely all get killed,” A gruff male voice spoke as the golden light exited Alice’s shoulder.  It was a fairy and there were several gasps, and then several more when the fairy transformed into a full sized human.  He looked human too, with a bit of gray around his temples and in his beard, and without the pointed ears of the elves or any sign of wings; that is to say he looked ordinary if one did not count the fact that he was standing in full plate armor, golden in color and with a falcon symbol on his chest plate.

“Now Commander.  There are twenty-four of them and that is the Storyteller’s favorite number, and they will be twelve and twelve if David ever asks her.”

“As it may, my Lady.  These Women of the Watch might yet provoke a war, and as for the humans…”

“Pardon me,” Alice interrupted and stepped forward to tap each human woman gently on the forehead.  She spoke as she went.  “Normally I have no say over human affairs, but this way I may track you and recall you if you are injured or in serious trouble.”

Mindy stepped up after she was touched.  “But Zoe is a true goddess.  You could simply wipe out the rebels if you chose.”

Alice stopped and touched Emily last.  “Solve my mystery,” she said before she turned to Mindy.  “I am Alice, not Zoe right now, but as far as it goes, I believe I will let the priestess explain why Zoe holds back.”  And Alice vanished.  She simply was not there anymore.

Every eye turned on Sara, including the eyes of Commander Falcon.  Sara dropped her head and spoke slowly, but clearly.  “Because every person deserves a fair chance to repent and be forgiven.  We would not be here if the Most High wiped us out for turning our backs on him.”

“Enough.”  Commander Falcon shouted.  “Women, gather your horses and your charges.  We will create the agreed distraction, but you are on your own.”  Commander Falcon looked ready to leave, but he paused for a final word.  “Good luck,” he said and he changed back to his normal fairy size and flew off toward the castle with such speed he also appeared to vanish.

The Amazons got swords, shields and spears of their own.  They got fairy weave clothing as well, a magical cloth that could be shaped and colored on command.  Emily told everyone to make the fairy weave into Kevlar-like vests.  She assumed the men had guns.  Sara made a long white dress and a white cloak with a fine hood instead, and the priestess would take nothing but her crook.  No one argued.

The horses were a bit of a problem.  Jessica had her own horse back home, of course, but of the others, only Sara and Melissa and the farm-girls Diane and Greta had ever ridden, and that was not much.  The rest were all city girls, more or less.  They had to force Detroit Natasha up on the beast.  The Watcher Women were assigned to ride one beside each Amazon.  Riverbend said it was to promote cohesion in the group, but she and Emily both knew it was so the elves could keep the Amazons in the saddle.

When they were finally ready, they turned their back on the distant castle and headed for the hills whose cliffs faced the sea.  Maria was the one who asked.  “What good is this?  We can’t ride our horses across the water, can we?”

“Wait,” the elf healer, Linnea who rode beside Maria spoke softly.  Maria waited, and when they passed through a gap in those hills, instead of being confronted with the sea, they found themselves on a grassy meadow that stretched into the distance for as far as they could see,

“The islands of Avalon can be reached without ever crossing the water,” Fiona explained to Jessica.  They were the hunters who rode out front, like scouts.  Jessica later said she understood completely, but none of the others understood at all except perhaps Melissa who talked about black holes and folded space and things that were even more confusing than the reality they experienced.

That afternoon they went to three or four different islands, or lands as Emily preferred to think of them.  Riverbend had explained that they were riding alongside but outside of orc territory.  In the morning, they would turn into orc lands and ride swiftly to the center where the men were.

“This way we may enter the land from an unexpected direction.  With that we might be able to get in and out before they notice and mount a defense.”

“Might,’ Emily responded.  “But what makes you think they aren’t watching us even now?”

Riverbend paused to look around.  “That may be, but in the morning Commander Falcon has proposed to intrude, however briefly, on orc land.  Our hope is he will draw all eyes to him while we dash for the center.”  Emily nodded.  She had no better suggestions.

“I would rather he draw all the spears to him,” Melissa said in her quiet voice from behind.  Emily and Riverbend turned their heads briefly and saw Melissa’s elf nodding her head without a word.

“You put those two quiet ones together,” Emily accused.  Riverbend just smiled in her elfish way.

“Yes, Lady.”  That was all her elf would say except for the occasional, “No, Lady.”

Maria and Linnea were exchanging recipes for Gazpacho, whatever that was, so Mindy turned to her elf and spoke.  “My name is Mindy.”

“Yes, Mum.  I’m Arwen.  I was southern born myself, around Charleston.”  Mindy perked up.  But she would file that for later.  First she had some questions.

“So tell me how Lady Alice and Zoe could be the same person.”

“The Kairos has been reborn one hundred and twenty-one times right down since the beginning of history.  My father works in the Avalon history department.  Oh, but I am not supposed to talk about it.” 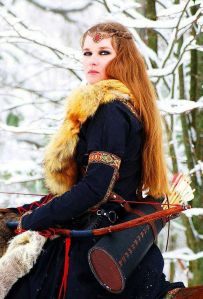 “Yes, I see.”  Mindy smiled.  “Interesting, though, how she can be Alice one minute and a person who lived and I suppose died thousands of years ago the next.”

“Oh, it is worse than that,” Arwen said.  “Lady Alice has not even been born yet.”

“What?”  That threw Mindy’s thoughts into confusion.

“Yes, she won’t be born for another fourteen or fifteen hundred years.  We aren’t quite sure, my father I mean, since it isn’t actually history yet.”

“She is from the future,” Amina spoke up from behind like it was an obvious fact.

When they stopped for the evening, they built a fire and laughed when they realized they knew some of the same jokes.  Linnea brought out some crackers as Fiona cut a deer for the fire.  Jessica watched as much deer cutting as she could tolerate.  Maria thought it was going to be a very slim meal until Linnea added some heated water to the crackers and they blossomed into full loaves of hot steaming, fresh baked bread.

“You know, though.  Laughing at humans is not encouraged,” Arwen admitted.

“Good to know,” Sara said, and there was silence for a time until Arwen stood up and told the story of the three dwarfs at the bottom of the well.  All present, elf and human alike, laughed so hard at the story, their sides hurt.  Even when they went to bed, there were occasional giggles that rose up here and there almost until sunrise.