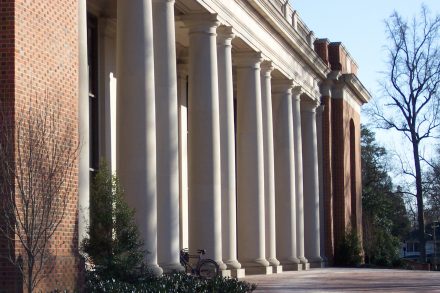 Jessica found three different sets of tracks in the slush and mud of mid-winter before the week was out.  She remained unconvinced that she was much of a hunter, but she was willing to let Artemis guide her eyes, just in case.

The first set of tracks were too small for a student.  She found it where it crossed a plowed and paved campus path.  It did not follow the paved paths that snaked from building to building, but walked across country instead.  She lost it somewhere between the science building and the library and guessed it followed the paved path after that.  She considered looking to see if it left the main path again, but it got late and dark, and she had studying to do. 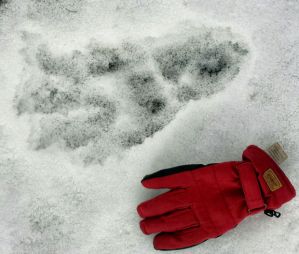 The second tracks were a group of prints.  It looked like three orcs.  This time she felt fairly certain they were orc prints because one was barefoot and the print looked more like a monkey print than a human print.  She followed these orcs to the walkway that circled the library, and lost them between the library front doors and a small stairwell that went down to a basement door.  She checked.  The basement door had no outside handle and had words on it that said, “Emergency exit only.  Do not enter.”  She put her hand to the door and felt there might be some connection there, but she could not say what, and there was certainly no way in.

Her third chance came just after sundown on Friday when she was hurrying home to change.  Jack wanted to go out.  He promised to take her to the Hive for a night of dancing and general carousing.  But as she hustled past the library, she smelled something.  Something felt wrong.  She froze and turned her eyes slowly to that basement door—what she could see down the well.  It looked like a creature as big as the door, and it looked strong enough to rip the door off its hinges.  Instead, it appeared to walk right through the door, which was a bit of a shock for Jessica.

As soon as it was gone, Jessica rushed down the well.  The door was still solid.  She already knew that.  The door had no way of being opened except from the inside.  She knew that, too.  She imagined it had one of those bars on the inside that would set off the fire alarm.  But this big and ugly ogre of an orc went in from the outside all the same, and Jessica stepped back and spoke to herself.

“No, it can’t be that easy.”  A moment later, she had Mindy on the phone and found her, as she suspected, still down in the sub-basement with the archives and missing dinner.

“I’ll be right up,” Mindy promised and very few minutes later they found their way inside to the door.  It turned out to be located in a dark hallway at the back of the building, behind the circulation desk and near the library offices.  It also stood near the loading dock and the freight elevator.

“I didn’t know we had one of these,” Jessica said, as she put her hand to the elevator doors.  They also had words written on them that said, “Restricted access.  Key needed for use.”

“Of course, we had to get the big stuff down to the archive room somehow.”

“Of course.”  Jessica said, but her eyes and mind followed some path, backwards.  She got back to the hall and wondered if there was more light.  Mindy found the light switch, but then she had a question.

“You say it went through the door.  Do you think it was a ghost?”

Jessica shook her head as she got back to that emergency exit.  “It was substantial enough to drag some snow and mud in on its feet.”  She knelt to examine the floor.  “In fact I would say any number of feet have come in this way and gone straight to your freight elevator.  See here, and here.”  Jessica pointed out some things and Mindy saw enough of it to be convinced.

“No,” Jessica agreed.  “But your archives are two flights down.  Don’t you think one of your artifacts might have been there or come from there?”

“Likely, but which one?”  Mindy wondered and added a thought.  “Of course, if it was a small thing it might be moved from place to place and the door might move with it.  That could make it very hard to find unless you know what you are looking for.”

“Something more for you to do.  It is circumstantial evidence, but the signs suggest the door is somewhere in your underground.”

“I hope Bill isn’t the one moving the artifact around.”

“What?  Where did that thought come from?”

“Well, Amina lost Joel, Maria lost Owen, Emily had to kill Pierce.  Our record with boys has not been good.”

“Things not going well with Bill?”

“No, I mean we are going well enough, he is just so slow.”