The travelers stayed for the three days of feasting.  It had become the custom for Yadinel and Mibdrus to meet once per year for three days.  On the first day, they feasted outside the city in great tents Mibdrus set up in the fallow fields.  That year, there was a slight delay as they waited for the Marzalotipan ship to leave.  On the first day, Mibdrus always asked Yadinel to surrender the city, and Yadinel always declined.  It was the tradition.

The second day of the feast was inside the city, in the great building with the threshing floor.  It was where Yadinel always asked Mibdrus to withdraw his forces and leave the city in peace, and Mibdrus declined, as expected. 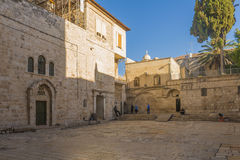 Katie and Lockhart had talked about the great building, being at the top of a hill the way it was.  Lockhart said it had to be extra work for the city to bring all the grain up to be threshed.  Yadinel nodded, but answered that in lean years, the grain and flour were rationed so hopefully no one would starve.  The top of the hill, with limited access made it easier to defend.  Lockhart nodded to the wisdom of that answer, but Katie had a very different question.

“Yes,” Yadinel whispered.  “This is the very floor that David will buy and where Solomon will build the temple.”  Then he said no more about it.

The third feast day was just below the threshing floor hill at the eastern gate.  That was just up from where the Jebusite army had its camp.  Yadinel pointed at the camp from the top of the wall.  “Bethphage,” he called it.  “On the direct road to Jericho and the side of the Mount of Olives.  A bit off the road to your right you can see the growing village of Bethany.  Right now it is mostly army wives and children, and what you might call other women with some enterprising men supplying goods for the troops.  Of course, they aren’t called Bethphage and Bethany yet, but they will be in time.” 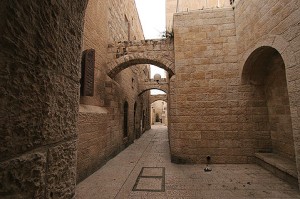 “So I have seen,” Katie responded.  “Things take time, sometimes centuries to develop, but the seeds go back much further than most modern scholars imagine.”

“Like the foundation for the city of Jericho being laid by the Gott-Druk,” Lockhart suggested.  Katie frowned, but was willing to nod.  To be honest, modern scholars did not credit the Neaderthal with anything more than a few stray cave paintings.

Yadinel nodded for Katie, with a glance at Lockhart, Lincoln and Alexis.  “And now I must go down much further than I care to imagine.  Alexis and Katie, I would appreciate you making sure I don’t fall off or down the stairs.”  They stepped up and took his arms, leaving Lockhart and Lincoln to follow.  “I don’t climb the wall much these days, but usually Paghat is a good girl and helps her old man get down.  Sorry she is not around.”

“You know where she is,” Alexis suggested, without actually saying she was off dallying with Mebdred.  Yadinel nodded his head like a man who was honestly not happy about it but knew he had no choice.

“It is the same story every lifetime,” Yadinel said.  “I always have to tell myself that the future is not in my hands.  It belongs to the children, and I will be somewhere else.”  Mingus and Boston met them at the bottom of the stairs.  They came to say the feast was ready, but Yadinel was not finished speaking.  “We do our best to raise our children well.  We teach them right from wrong

, about faith, and encourage them to love God and neighbor, but we cannot do it for them.  At some point, we will move on and they will be alone, to face their own future.  We cannot control that.  While we are alive, we can encourage them to make good choices, but we cannot prevent them from making mistakes.  In the end, all we can do is pray for them, that somehow, despite their mistakes, everything will work out for the best.  Prayer and hope.  That is all parents ever really have.”

“Everything is ready,” Boston said as she helped Yadinel from the stairs.

“Good,” he said, and smiled for her.  “After two days of feasting, you wouldn’t think it, but I am actually hungry.”

Mingus rode quietly at the back of the column.  He avoided talking to everyone.  He heard and thought about what Yadinel said about children, and about how parents ultimately can’t control what their children will do. Parents can hope their children will turn out to be good people, but that is about all any parent can really hope for.  Even among elves, where parents might live a thousand years, they will go over to the other side one day and leave the children to live their own lives.  Mingus frowned.

It was a terrible thing to imagine children dying before their parents.  That is what got this whole thing started.  He could not imagine Alexis dying before him.  No parent should have to be left to mourn and grieve for their child.  Then again, Yadinel lost his son, Aqhat, but he went on, cared for his daughter, and did his work in this world.  No one ever said life is easy.

Mingus looked forward to where Boston had ridden up to talk with Alexis and Lincoln.  He had two daughters now, and they were both good people.  He might not have liked their choices, but he had no power to force them to do what he wanted.  They were good people and that was more than some could claim.  Boston was a spunky child, still wet behind the wings as a fairy might say.  Alexis was a fine and mature woman with children of her own, and even grandchildren.  True, since she ate a bit of the apple of youth, she was presently about twenty-six, but being human, she would grow old fast.  Humans aged too fast, but that was out of his hands.

His own god made Alexis human so she could marry that man and live with his life; the short or long of it.  Deep down, Mingus trusted his god, or goddess as the case may be.  Certainly Yadinel, not a tenth his age, was wiser and more knowledgeable and with a deeper and broader understanding of life than he could ever hope to know.  Mingus felt he spent too many centuries in the Avalon history department and avoided life.  Certainly his children believed that was the case.

Mingus looked down at the chattering dwarf at his feet.  He grinned once to say he was listening, but he wondered if Pluckman Junior would ever take a breath.

He looked again at his daughters and thought that Elder Stow was right, as far as it went.  He had a chance to get to know them as grown people, and to tell them he loved them.  Thus far, he had failed miserably on that score.  He knew he was the only one who needed to change, but that was not so easy.  Life was not easy.

“So father says we are looking for a place to settle down, but it has got to have copper.  We thought Golan might be a good place.  It’s got nice, dark forests to hide in and all, but underneath there is tar and that oil stuff.  We gotta have copper.  Some tin would be nice to make some bronze, but copper is the good stuff.  It shines up real nice.  I just hope we can find somewhere that the goblins…er…dark elves haven’t already claimed.”

“No gold or silver?” Mingus asked.

“Nah.  Can’t do nothing with that stuff.  Too soft.  Can’t make a good ax or sword or nothing to fight with.”

“Well; hang around with the Kairos for a couple hundred years, and you better learn to fight.  Like it or not.  The Kairos never lives a quiet life.”

“The Timna valley might do, if we get that far,” Mingus said, and smiled again.  For himself, though, he imagined he had been fighting too much.  Maybe it was time to make peace, at least with his daughters.

Don’t miss next Monday, Avalon, episode 4.8 where the travelers meet up with the Swords and the Sorcerer.  The Sink Road adventure awaits…

And I wish everyone Happy Reading