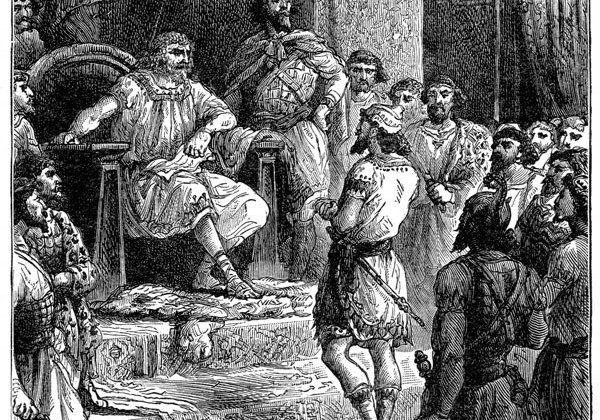 “You didn’t have to cut so deep,” Alexis complained as she stood and went to see about the broken nose.

“A miracle,” the guard who had been cut looked at his belly, leg and hand and yelled.  Everyone paid attention.  “Look, look.  I am healed.”

“You are the healer?” Hellel turned to the side to get out from under her husband’s glare.  “But you are a woman.”

“What does being a woman have to do with it?” Katie asked.

“It makes me afraid to think what your men may be able to do,” she responded and sounded sincere enough.

“We are not gods,” Lockhart said quickly.  “We are not able to work miracles, though Alexis has

some gifts for healing.  But what we can mostly do is be good friends.  We try to make friends wherever our journey takes us.”

“Yes, I have consulted with Sinuhe,” Alexis said after tending the broken nose.  She rejoined the group and faced the king.  “King Enshi.  There is no cure for your condition.  Your physician is doing everything possible to relieve your symptoms, but some of this must be up to you.  You must watch your diet.  If you eat foods that are bad for your condition, no one but the gods may be able to help you.”

The king lowered his head and took the scolding well.

“Now, about your plague,” Alexis continued.  “Again, your physician and I have talked, and frankly there is a limit on what any of us mortals can do.  But there is one thing that would help a great deal, and might actually end the plague.  I said might.  Right now, your streets are full of people.  I don’t blame them.  I hate armies.  But your streets are also, if you will pardon the expression, full of shit.  If you cleaned the streets, and cleaned up after your animals, and bring wagons for people to dump their waste rather than dumping it in the streets, that might be the best thing you can do.  The respiratory condition Sinuhe has described can be caused by a number of things, but filth may be the cause, and at the least it is not helping.”  Alexis quieted, and Gabrall presented the counter-argument.

“I am sure what you say is true, but we can only pray for rain and seek the will of the gods in this matter.  We do not have the people to do such work as you suggest.”

“What do you mean?” Lincoln spoke, in part to support his wife.  “You have a whole army of men right now that have nothing better to do than stand on the wall and spit off the battlements.”

Sinuhe smiled.  “I should have thought of that.  We could work them for the free food they and their families are getting.  It would keep them fit and give them something to think about other than the coming enemy, if any.  They say, idle hands are the devil’s workshop.”

“I am not paying an army of men to clean the shit from the streets,” the king objected.

“Would you rather pay the army to stand around and play spitting for distance?” Lockhart asked.

“That sounds like a fun game,” Zagurt whispered for the first time.

The king thought about it.  Clearly, he had not considered it in that light.  He was glad when the guard came back with what remained of the pigeon on a silver platter.  The king looked at it.  The Bird had a huge hole in the middle.  Zagurt leaned over.

Hellel just glanced at it.  She was too unhappy that she would not get her hands on a cracker, or apparently any other magic and powerful thing these strangers might have.  Her mind turned to stealing.

The king took the time of distraction to change the subject.  “I have sent men to collect your beasts.  It may be with a gift of one of your beasts I may let you live in peace.”

“I am sorry,” Boston stepped up.  “Your men will not be able to do that.  Our beasts are protected by a hedge of the gods, as are we.”

‘Quite right,” Everyone turned their heads as the image of beauty and perfection became manifest in that room.  The king covered his eyes, and Zagurt thought that was a good idea.  Gabrall began to choke on his breath.  Guards dropped to their faces.  Hellel’s mouth opened and she curled up in her chair, looking like one who wanted to run away and hide, but it was too late.

Sinuhe went to one knee and lowered his head.  “Hathor,” he breathed, as the woman walked right up to him and stopped.

“Stand up, Kairos.  You are only embarrassing yourself.”

He did, but he had something to say.  “You are my goddess this time, and you remind me of my princess whom you blessed so favorably in her youth.”

Hathor laid a hand on Sinuhe’s cheek and smiled for him, such a radiant smile that Alexis and Lincoln who got the full force of it were forced to lower their heads.  Hathor turned to Lockhart and Katie.  She hugged them both and spoke.

“That is from your baby girl, Sakhmet.  She misses you very much and send her love.  She also wonders how much longer before you two marry.”  Hathor let out a wry smile that time, and Lockhart and Katie felt it in the pit of their stomachs as they turned to face each other.

Hathor stepped passed them to where Mingus was on his knees with his head down.  “I should think so,” she said.  “You have two good daughters and it is high time you showed them both that you love them, and stop picking on Alexis.”  She saw Elder Stow, who appeared to want to join Mingus on his knees but looked frozen in his place, but she turned to Boston.

Boston was in tears, and Hathor gently hugged her and rocked her.  “Sweet, baby child.  You must not lose hope.  I am sure if there is any way possible, Roland will come back to you.  And if you must travel all the way home to him, I am sure he will be waiting for you with open arms.  Three years is not forever.  I think you two may have a good eight hundred or more years ahead of you.  Let your heart lead you, and be happy while you can.  As the Kairos is fond of saying, the future isn’t written yet, so you can make it what you want.”

Hathor let go and stepped passed Lockhart and Katie who were kissing and oblivious to everything around them.

“Why are you here?” Sinuhe asked.

“I remain the sponsor of foreign nations, with the permission of El and Astarte.  I am mostly finished with the Canaanites and never got into Syria much, but my father, Osiris did, and I am still fulfilling his promise to you, since…well, you know, even if you don’t remember at the moment.  There are still some cities here on the coast, including Sidon, Tyre, and others.  Ugarit is about as far north as I go.  Above that, the cities are Akoshian or Mycenaean and answer to Olympus.  Inland, the Hittite and Hurrians have their own pantheon, mostly run by a certain lady whose 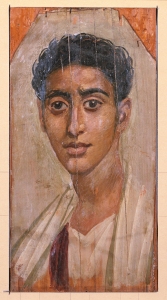 name begins with H, if you know who I mean.

“I was beginning to hope she did not know I was here,” Sinuhe said.

“She won’t hear it from me, but you know how well secrets are kept among the gods.”  Hathor stopped to shake a finger at the king.  “Leave Sinuhe’s friends alone.  Do what they say.  Give them whatever they ask for, and send them happily on their way when they are ready to go.”  She turned to Hellel.  “And if you steal so much as one thing from these good people, you may find yourself living with the gutter rats, and may even become one of them, am I clear?”

Hathor spoke is a very straight forward way.  She did not raise her voice or sound at all cross.  But everyone felt the feeling behind the words, and trembled.  Gabrall fell to his face and wept for fear.  Sinuhe wondered if Hellel wet herself again.