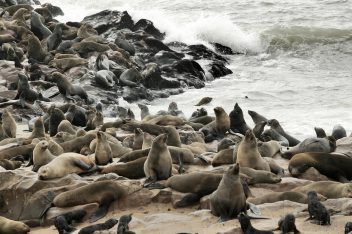 The travelers ended up camped on the small rise they were already on, the one that looked down on the seal covered beach.  The ship they had seen came into the bay, but opted to anchor there and apparently the captain had in mind to come to shore in the morning.  Lockhart borrowed Decker’s binoculars before sundown, and fired his shotgun twice into the air, thus telling whoever was aboard the ship that there were people on the ridge.  He and Katie watched, and saw someone wave a flag from the deck of the ship.  It was clearly a signal of some kind.  Whether it was the Kairos, or just someone attracted to the loud, cracking sound, who maybe spotted them, or their horses, or their smoky campfires, they could not say.

“We will find out who it is in the morning,” Lockhart said, and everyone settled in for another night 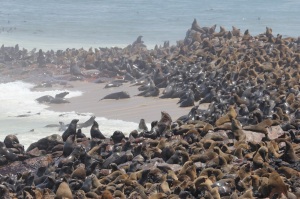 When he morning came, the travelers and their blueblood companions watched a boat come ashore, and spoke quietly while they waited.

“Those horses are no doubt marvelous creatures,” Goran said, as he shifted in his seat to find a more comfortable position.  Clomb and Lulu nodded and looked to be fairly uncomfortable as well.

“Feeling stiff this morning?” Alexis asked, with a broad smile.

“Yes, well, we are not used to such physical exercise, you understand.”

“Trying to live in the wilderness like this would kill many of our people,” Clomb spoke up, and finally stood up to get off his butt completely.

“Too much time at a desk, sitting in a comfortable chair,” Alexis said, and gently punched at her hips, expecting her butt to get smaller now that she was no longer doing that very thing.  “The spread,” she called it, and Boston giggled

“Coming ashore,” Katie said.  Everyone looked, and a few stood to get a better eye on the event.  Alexis borrowed Katie’s binoculars and Lincoln borrowed Decker’s, and then shared them with Goran.

The crew from the ship that was anchored off shore consisted of seven people, two of whom Boston, with her good eyes and elf senses insisted were female.  It was impossible to tell which was the captain until the seals did something no one expected.  They backed away to make plenty of room for the humans, and then two dozen of the big ones transformed into men. 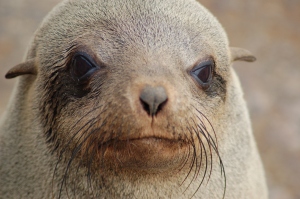 “Seal people,” Mingus named them.  “I thought there was something different about them.”

One member of the boat crew stepped forward and spoke to the seal men.  It was not a long conversation before the crew turned and headed toward the rise, flanked by the seal men.  Obviously, the seal men did not want the humans to get into the colony where they could interfere with the females and children.  The seals stayed down below when the crew climbed the rise.  Many of them returned to where they were before they transformed back into seals.  When they were finished, it was hard to tell exactly which seals had temporarily been men, but by then the ship’s crew arrived and there were introductions.

There were two couples, young and curious, that looked like they were out on an adventure, and an older man, Renglar, the sail master, who sounded and acted a lot like Decker.  The Kairos was Mikos, of course, who was billed as the emperor of Minos, called Akos, which was Crete, and Mycenae, which was mainland Greece.

“And most of the islands in between,” Renglar added as an aside.

There was also an elf names Cletus who was traveling along with the Akos, no doubt to serve as interpreter when they came across a people whose language Mikos did not know.  Cletus acknowledged his elder elf, MIngus, but kept his eyes glued to Boston.  “It’s the red hair.  It’s just the red hair,” Cletus kept saying.  “I have never seen such a beautiful elf with red hair before.”

Mingus got overprotective, Alexis got jealous.  Lincoln tried to stay out of it.  And Mikos pulled Lockhart, Elder Stow, and the three bluebloods aside.  Katie thought it was safer to follow them.

“You didn’t look like a stranger to the seal people,” Katie noticed.

“You are right.  Katie, please translate for the bluebloods.”

“What?” Katie had to think a minute to separate Mikos’ language from the blueblood language.  “Okay,” she said, and she translated word for word.

“An Akoshian merchant used to come here and started clubbing the baby seals for their skins. As soon as I found out, I ordered him to stop, but like most of the Akoshian nobility, he thought the rules did not apply to him.  Perverts is what Nalishayas used to call them.  So I gave him to the seal men and I think they fed him to the sharks.”  Mikos shrugged and looked at the blueblood Goran.  “Just remember, you are not above the rules.”

“Sire,” Goran said with lowered eyes.  It was the blueblood way of saying yes sir.

“Clomb and Lulu,” Katie introduced the other two.

“And I bet she is,” Mikos said as he watched Lulu and Lockhart glance at each other and saw the growl form on Katie’s face.  “Eder Stow, can I see you communication device?”

“Of course, but it is tied to Gott-Druk frequencies not yet discovered by these, er, other people.”  They all saw Elder Stow choke on the word primitives.

Mikos nodded and took the back off the communication device as Boston came up and stuck her nose in.  Cletus was making her uncomfortable.  Mingus got the young male elf to sit with his other daughter, Alexis, and her husband.  They were sitting with the young couples from the crew and talking about the weather.

“So here is the rule,” Mikos said, and gestured to Katie so she translated.  “I have told my people you have blue skin and are cold to the touch because you are walking dead people.  They did not doubt what I said.  I said they would be all right as long as they did not touch you.  You are not allowed to so much as touch them.  Got it?”

“Oh,” young Clomb spouted.  “We were told that this world is off limits and we are strictly not to

breed.  Breeding is a death offense.”

“I’m not interested in any of your people,” Lulu said with a long look at Lockhart.

Katie translated and then added her growl in Lulu’s face.  Mikos looked up and grinned, but Boston got his attention back.

“What are you doing?”

“Lunch, Boston dear,” Mikos said. “What say we do lunch.”

“I’m going to adjust this communicator, if I can, to pick up the blueblood frequencies.”  He stuck his hand out to Eder Stow.  “Scanner,” he said.

“Careful,” Eder Stow said.  “The scanner is set to put up a screen in case the sevarese attack.”

Mikos paused.  “I guessed it was bluebloods and sevarese, you know.  Hebat came and told me there was fighting going on over here, but she says she can’t tell one alien from another.”

“What did you tell her?” Boston asked.

“I told her I am married so forget it.  It is about time for her to get a husband anyway.”  Mikos sat on a log by the fire and Boston and Elder Stow sat on either side of him.  Mikos traded places through time with Martok the Bospori, but continued speaking like he was the same person, which he was.  “I miss my wife, or rather Mikos misses his wife.  Sasha is his or my soul mate, if you know what I mean.”

It did not take long before everyone heard the blueblood radio chatter clearly over Elder Stow’s equipment.  Goran got up to speak.  He gave a reasonable telling of their story, fudging only a few details of their escape, figuring his commander would not believe the tale about earth spirits coming to their rescue.  He pinpointed his position as well as they could, and then Martok turned it off.  He showed Elder Stow how he adjusted the communicator to pick up the alternate blueblood and sevarese frequencies, and handed it back.  He held on to the scanner and said he had more work to do with it.

It was hardly two hours later.  People finished eating, and got packing to travel.  Lockhart had explained to Mikos how the time gate appeared to be somewhere out at sea, and Mikos just finished explaining that his ship was not big enough for all the horses, and he would have to arrange something, when the sevarese attacked.

Six fighters came roaring out of the noon-day sun.  They attacked the group, but Mikos put Elder Stow’s screen up and it easily deflected the sevarese weapons.  Elder Stow only had a small device, what he called a child’s toy, but it was of a sophistication and power more than 4,000 years beyond anything the sevarese or bluebloods imagined. 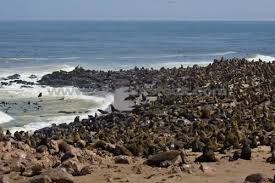 Several Sevarese shots went into the seal colony and both Boston and Alexis objected.  “Couldn’t you have extended it to cover the seals.  They are people, you know.”

“Not exactly,” Mikos confessed.  “History never quite decides where the seal people fit on the scale of people-hood, if I can use that word.”

A big sevarese transport came moments later, and parked not far from the camp.  Decker and Renglar both agreed the sevarese probably had ground troops in there, and they prepared themselves to repel an attack.

One sevarese fighter took aim at Mikos’ ship, and cracked the mast while setting a small fire, but moments later, a half-dozen blueblood fighters showed up and it looked like the battle was going to be on.