The travelers left the interview and got escorted under a wing of the sevarese mother ship to a different place on the mountainside where the sevarese had parked and camouflaged their presence.

“By the book means the next visit, they will probably take one or two for more thorough questioning,” Decker said as they walked.

“I wonder if they waterboard,” Lockhart joked.

“Not funny,” Lincoln, the former CIA operative who went to work for the Men in Black in the early seventies did not laugh.

They came to a cave that was not a natural cave.  It looked like it had been carved out of the cliff, or maybe blasted out by a careful use of the sevarese main gun.  It had a wooden door attached, made out of a whole tree, and while it was locked with a simple outside latch, there would be no breakout.  The sevarese needed something like an earth mover to open and close the door.

Inside the small cell-cave, the travelers found three blueblood prisoners, one old man, one young man, and one woman.  The bluebloods stared at them and backed away to a corner to give these strangers plenty of room.

“Will they feed us this time?” Alexis quietly asked her husband.

Lincoln shrugged.  “The ones in Etana’s time said they liked their flesh raw.  I wouldn’t expect them to cook anything.”

Lockhart stared at the bluebloods and listened in to their whispers before he decided it was rude to eavesdrop.  “You don’t look like three witches to me,” he said in reference to the defensive robots typically used by a crashed blueblood ship to secure the area.

“Witches?” one of the blueblood men looked up, and the bluebloods all looked surprised that this human understood their language.

“The three robots you people send out to drive back whatever local people might interfere with repairs or rescue operations,” Katie explained.  She had turned from trying to find a way out of the cell.  Decker was still looking when Katie turned to Alexis and Lincoln and added, “Like we found in Iddin-Addad’s day.”  Lincoln and Alexis nodded.  They remembered.

“How long ago was that?” Alexis asked.

Lincoln patted his shirt.  “How should I know?  The database is gone, remember?” He sounded

The bluebloods looked at each other before the older one of the men appeared to figure it out.  “The Hammashine,” he said and smiled, like he was pleased to remember the name.  “We haven’t outfitted ships with Hammashine in four or five hundred years.”

“The ones we had to destroy seemed pretty effective,” Katie said, with a nod from Lockhart.

The old man agreed.  “But the Pendratti in the old war found a way to remotely reprogram them and turn them against us.”

“A good reason to drop the technology,” Decker said, having finally given up trying to find a way out of the cave.

“So why haven’t you tried to impregnate us?” Alexis spoke up rather rudely and pointed at herself and Katie.  “I thought the blueblood way was to secretly impregnate the local population until the locals died out and were replaced with blueblood children.”

“Oh, no,” the young blueblood male looked at the ground, raised his hands and shook them.  “We were warned that this world is off limits.  We were strictly told that any attempt to impregnate the local humans was a death offense.”

The female looked directly at Lockhart as she spoke.  “You even look like us, and your warm blood is immensely attractive. It is a compulsion, but we can fight it.”

“I am Goran,” the old man interrupted.  “My companions are Clomb and Lulu.”  Lulu was the female.  “We piloted a three man scout craft sent to search out the sevarese, and we found them.” 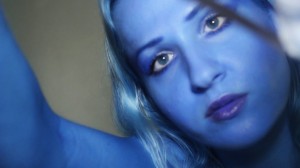 “You are humans?” Lulu asked Lockhart as they locked eyes.

“Three man craft,” Katie said with a touch on Lockhart’s arm to get his attention, and a hard glance at the blueblood.  “Probably based on the old Balok design.”

“Probably,” Lockhart said as he looked away.  He chose to look at Decker.

“No way out I can find,” Decker reported.  “We might as well relax for now.”

“I’m sorry, but they took our weapons,” Goran admitted.  “We might have basted our way out if we had our weapons.”

“They took our weapons as well,” Decker said, flatly, and tapped his hip as if feeling for something that was not there.

“But our weapons couldn’t blast us out,” Lockhart admitted.

“No good if they could,” Katie said.  “That much noise would just attract the sevarese.”

“Alexis?” Lockhart looked at her.  She shook her head.

“My magic is not strong enough to budge that tree,” she said.  “I might as well try to move the

“Magic?” young Clomb sounded surprised and a little afraid at the thought.

“It would take some magic to repair our battle cruiser,” Goran said.  “We took a risk coming here because it was close and because it is well known to be off limits.  We hoped the sevarese would not follow us.”

“Glory Cata sounded determined to get you, and he is not convinced as to why this world is off limits to all space races,” Katie said.

“So, you met the sevarese commander,” Goran responded.

“The Kairos,” Goran knew the name.  “We came here in part hoping we could find this one and he or she might help us repair our ship.  Some of us thought that was like walking into the Pragodda mouth.  Our records show in the past she was not kind to those who broke the rules.”

“He in this age, I think,” Lincoln said and shrugged.  “How should I know?”

Everyone paused at the dim sound of picks and hammers.

“Hush,” Decker said it out loud, but everyone was quiet.  Someone was behind the back wall.  “They are coming for Lincoln,” Decker said as everyone moved away from that wall.  It took a few  minutes before a rock fell from the wall.  There was a small hole.  Then a big section of the back wall collapsed, and the travelers and bluebloods shivered from the sound of a voice hidden somewhere in the dark.

“Look out, Shredder.”  That was Boston’s voice, and a second later she appeared in the cave, or more accurately, she became visible as she spoke.  “Look, Alexis.  I learned how to do invisible.”  She confided to Lockhart who was inching behind Katie and Lulu who stood on either side of him.  “I was motivated, but it is so draining.  I can’t keep it up for long.”

Mingus came into the room and walked straight to Lincoln.  “Here.  You lost this.”  He handed over the database.  “At least this time you didn’t lose your wife.”

Elder Stow stuck his head in and reported.  “The horses and all of our equipment is safe.  We will gather the horses at sundown and escape.  I have arranged to cover us with a screen to protect us as we move, assuming my equipment works correctly.  We will have to stay together, though, and

not spread out too far—”

“Got to get moving,” a dwarf head poked into the room and interrupted.  “It takes time to back fill, and we want to leave a good mystery for the birdmen when they show up.”

“Coming?” Lockhart said to Lulu as the other started into the tunnel.  Katie butted between the two.

“You can ride behind me,” Katie told the blueblood female.

Only three posts this week, and three next week to conclude Avalon 4.1 A Time for War