Cinnamon sat quietly on Jessica’s shoulder until they came to a place where the forest began to thin. The path they walked on petered out as the ways opened up and the forest kindly let them walk around any number of trees. Jake looked back, curious. There was no sign of the wall or the cemetery and he wondered how it might have vanished so instantly and completely. Jessica did not notice. Cinnamon began to talk quietly in her ear.

“Are you and Jake loving each other?” Jessica looked. Jake had his hand on the cutlass, to keep it from swinging wildly in the woods. He kept looking all around, a wise precaution since this place was so full of surprises. 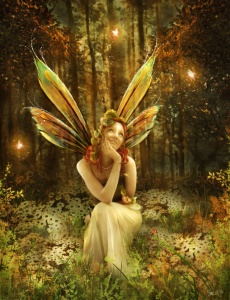 “Why is it complicated? That is a big word so it must be a big reason.”

“That’s the problem. You are using your thinker instead of your thumper.”

“But what if he isn’t loving her?”

“That is very sad, and the fairy goes away and cries, sometimes for a whole day, before she can have fun again.” Cinnamon adjusted her seat to whisper very soft. “When a fairy truly falls in love, she says, “You are my heart.” That is when the thumper takes over and the thinker can’t think of anything or anyone else. And if she is his heart, they become a family.”

“That sounds so simple.”

“Why shouldn’t it be simple?”

“But what if she isn’t his heart?”

“Very saddest of all. We don’t like to think about that. But then, when a fairy says someone is her heart, it can be a father or mother or sister or brother or best friend forever, so it means lots of things.”

“I wish people were that easy. Human people, I mean.”

“Aha!” Cinnamon jumped up and Jessica felt the breeze from the fairy’s wings. They tickled her ear. “I know where Greely Putterwig lives from here.” She got excited, lifted into the air and spun around several times until she almost made herself dizzy.

Jessica looked where Jake was looking. A lovely cottage sat some ways off, down in a hollow in the woods. It had a warm and cozy glow about it in the night, and smoke rising from the chimney. There appeared to be roses out front, and a stone walkway that ended at the front door. Cinnamon ruined the lovely vision with what she said.

“The witch’s house. Wait here this time. I’ll be right back.” The fairy flitted off, again with such speed neither Jake not Jessica had a chance to protest. 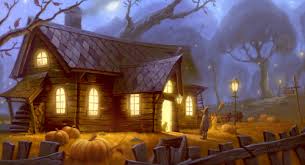 Jake looked at Jessica and she smiled. He did not know what to say. “Some Halloween, huh?” It sounded stupid to his ears.

“And goblins.” He could go with this for a while.

“Real Pirates.” She pointed to the cutlass.

“Zombie Pirates,” he corrected her.

“And a real live ghost.”

“A real dead ghost,” Jessica offered a correction. “I feel sorry for Thackery.”

Jake nodded in agreement, but then he ran out of things to say. Jessica merely looked at him until he felt a little uncomfortable. He looked away, and this time, it was his turn to scream first. Jessica turned from her own thoughts to join him in the scream. Spiders came over the horizon. They looked big, at least two feet long not counting the eight hairy legs. There appeared to be plenty of them. Jake and Jessica got surrounded.

Jake carefully pulled out the cutlass, though he almost cut himself. “Put your back to the tree,” he yelled. Jessica just screamed again. Jake began to swing the cutlass, wildly. The spiders did not care or seem to notice until the one in the lead got cut through the head. Blood and guts squirted, and then dribbled out.

“Over here,” Jessica yelled and Jake went to stand in front of her, while the spiders slipped into the long, moon-made shadows of the trees. They could hear the click-click of their jaws all around. Jake cut two more when they came close, but there were too many of them.

Jessica felt something drip on her shoulder and looked up. She screamed again. One hovered in the tree, over their heads, and drooled. Jake could not reach it with the cutlass. Jessica tore off her orange

vest and tried to slap it out of the tree, She could not reach it either, but a green light came from just down in the hallow. It struck the spider, and the spider fell to the side, rolled to its back and curled up dead. Jessica screamed again before they heard a woman’s voice.

“I heard ye the first time.” The woman sounded annoyed. She had gray hair, looked a bit plump from age, and lifted her plain brown dress and apron as she struggled up the hill. She had a stick of some sort in her hand, and the green light was emanating from the stick. Three more spiders got zapped, like with green lightning, and the spiders decided to retreat. When the old woman came to stand in front of Jake and Jessica, she took a deep breath, like she was winded from the climb. Then she raised her arms and shouted something unintelligible. The green light formed in a circle around the three of them and their tree before it shot out like a wave made by a pebble in a still pond. No telling how many spiders suddenly keeled over and curled up.

“Okay. They won’t be back this Halloween night, but you don’t belong out here. You better come inside.” Neither Jake nor Jessica had to say “this is the witch from the cottage.” The circumstantial evidence made that crystal clear. Jake tried to wipe the cutlass clean and put it back in his belt. Jessica ventured a small question.

“Your house wouldn’t happen to be made of gingerbread, would it?”

The witch laughed, a healthy human laugh and not the cackle they expected. What is more, the witch showed a kind little twinkle in her eyes that helped them relax. “Wrong season for gingerbread.” The witch almost stumbled on a root, but Jessica reached out to steady the old woman. “My name is Mary,” the witch said.

“I’m Jessica and that is Jake.”

“Don’t tell me, you are following a little girl named Elizabeth.”

“Up on the mountainside with Greely Putterwig, the hobgob. Don’t worry, she should probably be just fine. I’ll take you there, but after I catch my breath if you don’t mind.”

“Are you psychic?” Jessica wondered how the witch knew all this.

“No. Tom the cat came by and told me. Please, come in and have some tea. I don’t do much magic these days, at my age. It takes so much out of you.”

Jessica caught some movement out of the corner of her eye. It was a perfectly black cat, sitting on the lawn, washing a paw. Jake had his eyes focused on the jack-o-lantern on the front stoop. He was just admiring the intricately, beautifully carved features of a very frightening goblin-like face when the face moved.

“Boo!” The pumpkin face crossed its eyes and stuck its tongue out. Jake, and Jessica, attracted by the movement, both let out a shriek. “Did I scare ya?” the pumpkin asked. Jake and Jessica nodded. “Good, cause the old witch put me here to guard the front door, but if I had a body I could guard it so much BETTER.”

“Oh, Jack. You are just fine the way you are,” the witch said with a kind smile as she opened the thick oak door,. The inside of the house let out a warm light and inviting smell. “Come in,” she said. “Chamomile tea I think for this time of night,” and the entered the house, together.

select October 2015. Charmed is the only posting for the month … So after the 28th, I say to you all, Happy Halloween, you know, like scarecrows coming to life.