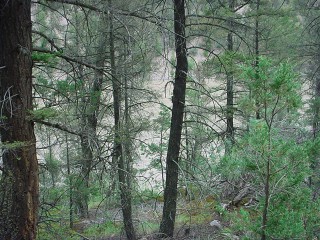 Elizabeth Simon, all of seven-years-old, finished at 315 Bleeker Street, but when she went to the sidewalk, she saw her brother occupied with some big kids. She did not interrupt. She decided to go to the next house as she had been taught. She liked the house. It was dark and spooky, the way she thought Halloween was supposed to be. The unkempt yard cast all sorts of odd shadows across the walk, and the rickety porch squeaked under her steps. She even found a big spider web in the corner next to the post, up near the roof.

The old man sat in the rocker, watching. Elizabeth saw him from the front walk, so he did not startle her. “Child,” he said. “What do you want?”

“Trick or treat,” Elizabeth said her line, held out her shopping bag, and smiled a warm smile.

“Trick or treat? Trick or treat is it? What a quaint custom.” Mister Putterwig glanced ever so briefly at the young people out on the street and he thought he could easily make the little girl disappear. “I can do a trick, and I have a treat, both,” he said, and put out his hand. It held the biggest, most chocolaty, gooey mess Elizabeth had ever seen. “But only good little girls can have some,” he warned.

Elizabeth’s hand hesitated. “I try to be good.”

She did, and when the old man held out his other hand to take her hand, there was nothing more she wanted in the whole world than to go with this kindly old man. When they entered the house and came out among the pine trees, Elizabeth had a question.

“Where are we going?”

“To a land of wonders and enchantment and magic, and keep walking.” Mister Putterwig looked back.

“The land of the fairies?” Elizabeth sounded excited.

“I suppose there are some around,” Mister Putterwig made another concession. “But once you eat fairy food, you become captive to the little ones, or in this case, to me  Now, you have to do whatever I tell you.”

“Oh, yes. But I don’t mind because you are such a nice man.”

Elizabeth stopped and looked up into the man’s eyes. He contorted his face with a big toothy grin and squinted his beady little eyes. Elizabeth shrieked and looked away. “There, see?” Mister Putterwig sounded proud, like he proved his point. “I told you I could be mean.”

“No, that isn’t it,” Elizabeth said. “You looked like a clown face and I’m scared of clowns.”

“Don’t answer him. Come on. Hurry.” They began to walk again and picked up their pace. It was a few minutes before they slowed again and Mister Putterwig had a question.

“Well, Elizabeth-Elizabeth Simon, my name is Greely Putterwig, and I am a Hobgoblin.” 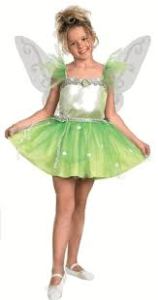 “What?” Mister Putterwig eyed her closely.

“Not too much,” Mister Putterwig said, and seemed relieved. “You’re a bit big.”

“But I got wings and everything.”

“I see that. Turn around.” Elizabeth turned and Mister Putterwig adjusted her wings to set them more squarely on her back. “That’s better. Now you look more fairy-like”

“Thank you,” Elizabeth said, and reached for Mister Putterwig’s hand, who took her little hand and almost smiled.

They started to walk again. The pine forest did not seem too dark where the trees did not grow too close together.   Plenty of room remained overhead for starlight to find the forest floor. Elizabeth saw some snow on the firs and she could not help voicing her thoughts. “Do you know any Christmas Carols?”

Mister Putterwig stopped and looked angry for a moment, but one look into Elizabeth’s innocent face and he decided to think about it. A hoot owl sounded out not too far from where they stood. He started them walking again and sang, “Oh, you better watch out.” He stopped there, and Elizabeth giggled.

“Stop, stop. Stop!” Mister Putterwig waved his big hands back and forth, shook his head, and snarled. Elizabeth stopped, worried that she got it wrong. “You can cry and pout if you want to. Go ahead and cry. And Pouting is an old family tradition, my family I mean. “Oh, you better watch out” is the only part I sing. There’s reasons for that we don’t need to go into just now.”

Elizabeth tried to nod and agree, but all she could do was scream. An eight foot ogre stood directly in their path. He was ugly, tusky, full of boils and puss and with more sharp teeth than anyone would consider reasonable. He had long arms and short legs, all the size of tree trunks, and apparently carried a separate tree of some sort, his club, in one huge, gnarly hand. He also had a spark of intelligence in his eyes which said this creature is fully capable of chasing you and eating you, though to be fair, the spark of intelligence was a very small one.

“Eliza-BETH!” The sound came from a long way off, much further than before

“Jake!” Elizabeth shouted back. She recognized the voice.

Elizabeth was glad to run from the ogre. She was a bit upset when the ogre spoke over her head.

“What are we running from?”

Elizabeth screamed again, and stumbled. Old Mister Putterwig scooped her up and ran at a spritely pace. In fact, even carrying the little girl, the old man ran fast enough to lose the ogre somewhere in the deeper forest.

Charmed is either a very small book or a long story offered in eleven posts over this October, 2015, leading up to Halloween. The posts will be put up on the blog on Monday, Tuesday and Wednesday, October 5, 6 and 7; 12, 13, and 14; 19, 20, and 21; 26, 27, and an extra note on the 28th. If you miss a post, or want to go back to the beginning, they are easy enough to find. Just click on the archives and select October 2015. Charmed is the only posting for the month … So after the 28th, I say to you all, Happy Halloween, you know, witches flying across the face of the moon and stuff.

2 thoughts on “Charmed: Part 2 of 11, A Disney-Like Halloween Story (Without the Singing)”