The travelers get in a bind when one of the monsters following them catches them, and things quickly escalate to a matter of life and death. 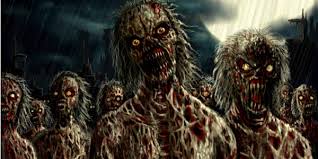 Lord Veregoth, the giant asked his question while Mitra and Baga caught their breath. “What did he mean, the dead will eat the living?” He was still staring at Lord Visana who was laid out, unconscious, across the entrance way where the door could not be closed.

“The dead are rising from their graves,” Mitra said with only a touch of panic in his voice.

“Movement in the graveyard,” Major Decker spoke from the wall at the same time, his eye focused out the narrow opening. Katie and Lockhart went to the side wall to look out on where the graveyard was, and Boston joined them.