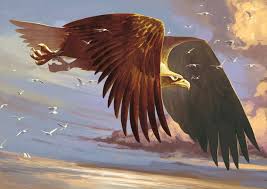 The roc went straight for the serpent eyes, but the serpent moved faster than the bird anticipated.  It almost bit a chunk out of the bird before the bird could back pedal.  The sea serpent began to writhe, banging several times hard into the hills.  There was no way for the travelers to vacate the gully they were in without exposing themselves to a stray hit from the serpent head.  They still had their hands full avoiding the falling rocks and debris, and keeping their horses from panic.  The fact that the serpent was no longer directly targeting the horses for lunch made little difference to the horses.  As long as the serpent and roc remained overhead, cawing and clawing, roaring and reaching out with that cavernous serpent mouth, the horses instinct for survival made them hard to control.

The Roc tried to get behind the serpent head and peck and scratch at the serpent’s ears and eyes, 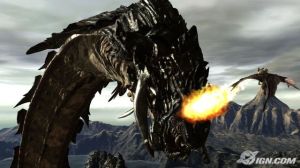 but the serpent could turn its head a hundred and eighty degrees around to bite at the bird.  It could snap its head all of the way around and back again from the other direction, so getting behind and staying behind the head was not easy.

The noise of roaring, scratching, pecking, screeching was horrendous.  The horses shivered, the people shouted, and some screamed when the battle came overhead.  The last of the villagers needed courage to expose themselves on the narrow path that wound around and up the taller hill.  The travelers stayed in the gully, knowing the horses could never traverse that narrow way, and more than once feeling that the sea serpent had somehow zeroed in on them.  They were the intruders in that land, and it seemed like someone knew it and sent the serpent to rectify the situation.

The roaring and screeching became muffled all at once, and everyone looked up, though there was nothing to see.  The battle sounded like it was receding, and Boston could not resist looking.  She left her horse in father Mingus’ hands and began to climb the smaller hill.

“Where are you going?” Mingus yelled after her.

“Boston,” Lockhart called to her. 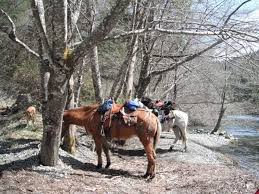 “Get back here,” Alexis yelled before she left her horse in Lincoln’s hands and climbed after the crazy elf.

“Alexis,” Lincoln let out the word, but he did not try to stop her.  The horses were settling, now that the battle appeared to be moving away, but they were still a handful.  Decker was already looking again at the escape route, up to the high meadow, but the horses were not yet ready to walk there, much less be ridden.

“Here,” Elder Stow interrupted Decker’s thoughts by handing his horse to Decker and adjusting his equipment.  He had his screen device out, not that he had any hope his little portable device could stop a direct hit from that massive serpent head, no matter how advanced and strong his screen was, but he imagined it might deflect the head long enough to let the women scoot back down into the gully, to safety.  He climbed after the girls.

Boston got to the top and saw the serpent withdrawing to the river and the sea.  “Wow.”  It was all she could say.  The withdraw was a slow process as the sea serpent was clearly not used to backing up.  The roc stayed with it all the way, pecking and clawing, and trying not to get too close or get caught by those serpent jaws.

“Magnificent,” Alexis added the word when she caught up.  Then she had to pause to catch her breath.  She looked toward the sea to see if she could picture the sea serpent backing out of the delta.  She saw something, and it took a moment to understand what she was looking at.  It looked like a mountain in the sea.  She tried to imagine a bunch of sea serpents, coiling and writhing, and moving rapidly in their direction.  Then her eyes went wide, and she turned to shout down into the gully.

“Tsumani.  You have to get higher.” 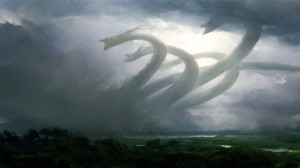 “What?” Lockhart did not hear clearly.

“Tsunami,” Mingus repeated as he began to pull the horses to the trail.  “Get higher.”  Being an elf, he could make himself heard by everyone, and everyone tried not to panic.”

“What?” Boston finally turned her eyes from the battle.  Alexis pointed, and like Alexis, it took Boston a few seconds before her eyes went wide.  She got ready to run at elf speed, but stopped when she realized she could not leave Alexis to drown alone

“I can’t tell how tall that mountain of water is,” Alexis said as Boston helped her move carefully back down into the gully.  They had some distance before they could get to the upland meadow, and they did not need to slip and twist their ankles along the way.  They had to be careful.

“Tall enough so we need to get higher,” Boston said, as they went down.

The others were pulling and doing everything they could to get the horses up the incline to the meadow.  It was not really a trail.  It was more like a way with flatter, less round, hopefully more stable rocks.  It was not easy, and especially when Mingus, Lincoln, and Decker had two horses to 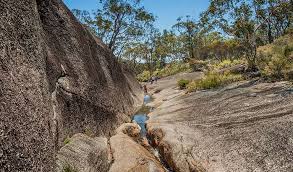 Boston and Alexis reached the bottom and started after the horses as quick as they could.  They tried to move faster when they heard the thunderous sound of the tsunami hit the shore.  Boston caught one last Godzilla-like roar from the serpent as it submerged under the wave.  She heard one more great “caw” from the roc as it climbed to get above the water.  It was simply not safe to move too fast on those rocks.  Alexis almost slipped twice, and Boston once.  They heard Katie yell for them to hurry up.

Decker got to the top meadow and immediately looked for shelter.  There were rocks near the top of the larger hill where they could squeeze in and put their backs to the rocks and the sea.  It put them in among the trees where it would be hard to reach them from overhead.  If the water poured over the hill, they ought to have an air pocket beneath the rocks.  They would have to hang on when the water receded and probably brought whole trees with it, but Decker figured one thing at a time.

“Through the trees, and we might be able to get up even higher,” Lockhart said, and pointed

generally into the woods, toward the distance.

“No time for that,” Decker said.  He yelled back to the others who were just reaching the meadow, or stopped to encourage Boston and Alexis to hurry.  “Up here.  Get behind the rocks.”

No one moved.  They saw the water.  It hit the hills with the sound of thunder.