Up close, it became clear the gate had been broken down, and burned from the look of it.  That much seemed obvious, even in the dark.  What Greta could not figure out was, how?  Explosives would have splintered the door.  A bulldozer might have done it, but no way this got done by a bunch of men with a battering ram.  It almost looked like it was pulled off the hinges from the inside, and that made Greta wonder if the enemy broke in or the towns people were trying to get out.

There were bodies and pieces of bodies everywhere inside the gate.  Men, women and children looked torn, shredded and partially eaten with an arm here and a leg there.  Vedix thanked the gods it was dark enough to disguise the full impact of the horror. Hermes held a cloth over his mouth and tried not to look too closely.  Even so, Hermes threw up when he tripped over a torso with the head still attached and one dead eye staring up at him; and Mavis almost joined him. Alesander and Briana could hardly force their eyes to look away, like rubberneckers on the highway.  By contrast, Nudd kept his eyes shut tight, and for once, Greta did not blame him.

Lord Crag lead them quickly to the drain grate. “The main lines are tall enough for a man to stand upright,” he told them, while a troll ripped off the cover. They heard a howl echo through the city streets and Lord Crag added a word. 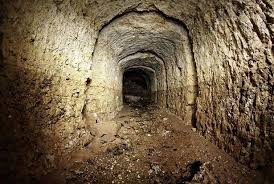 Greta found the underground as dank and dark as advertised.  The goblins and trolls did not mind too much, being used to living in the swamp, but they turned up their noses against the smell.  Mavis did throw up a little then, and Hermes gave her his cloth to cover her mouth.  Bogus and Pincushion remained stoic the whole time, but walked like statues with their mouths open and their eyes bulging.  Greta knew dwarf eyes saw better in the dark than human eyes, and she figured Bogus and Pincushion saw plenty up above.

“There are lots of caverns that drip limestone and create pillars out of stalactites and stalagmites,” Bogus said.  “But the smell can get hard to handle.  We should be fine if this trip doesn’t take too long. Trust me, you would not want to see my vomit.  It would not be sweet and dainty like your handmaid.”

“I could vomit,” Ulladon volunteered.

“Never mind,” Briana said.  “How about some light.”

Lord Crag had several goblins light torches which were specially prepared to be smokeless.  He spaced his men between members of the group to give light for the journey.  Ulladon made a fairy light and floated it out front.  It had a slight green tint to it which did not help the queasy stomachs in the group.  Mavis also made a fairy light, but it appeared bright and warm like the sun.  That helped everyone’s disposition, except maybe the trolls.  Mavis let her light follow the group, but kept it in front of the ogre and the trolls who brought up the rear.  Bonebreaker did not mind the light, and fortunately he blocked enough of it to keep the trolls from protesting too loudly.  But then poor Bonebreaker had to bend over almost the whole way underground, and twice he had to squeeze through places where the tunnels had partially collapsed.

The group moved as fast as they could, and quickly came to one of those underground chambers. 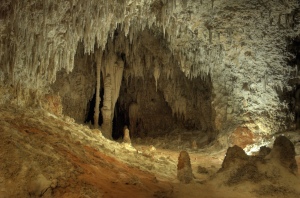 When the two fairy lights raised toward the ceiling, they could see the drip, drip of the water they felt as they walked.  By the time they reached the far side of the cavern, they heard the howls behind them.  Lord Crag tried to hurry them up, but the group could hardly move fast by torchlight when their footing crossed wet and slippery rocks and broken bits of tunnel ceiling.  They were inclined to stumble.

“We should reach the next cavern soon, just before the river,” Rotwood said, though no one really listened as their ears all focused behind to hear sounds of what followed them.  The tunnel emptied out into a small cavern with a high ceiling that had the feel of a grotto by the sea.  They saw boulders all around on ground level which kept large sections of the cavern in the dark and made spooky, flickering shadows in the torchlight.

“The river is straight ahead,” Rotwood said. “We need to climb up here to get out of the drain by the docks.”  Lord Crag sent a half-dozen goblins up the walls to the drain to open it, check out the area, and see if there might be a ladder or something to help the humans.  Everyone else paced and looked back the way they came, expecting the Wolv any minute.

It honestly was not long, even if it seemed forever, before a long ladder came down from the drain opening along with a long rope.  Two more goblins went up first, one on the ladder and the other by way of the rope. With the all clear, the group began to climb.

Greta sent Lucius, Alesander and Briana up first saying, “Like in the wilderness, you take the point.  Find cover and guard the exit for the others.”  Vedix, Bogus and Pincushion followed with instructions to head for the docks and find a boat.  Hermes got prepared to start up the ladder with Nudd following, and Ulladon got half-way up the rope when Mavis balked.  She refused to go up before her mistress.  She said she would climb the rope when Greta climbed the ladder. Greta insisted she would be fine and right behind her, and anyway, she had Bonebreaker between her

and the tunnel, but Mavis looked unmoving.  Then the Wolv arrived.

One Wolv came out of the tunnel and let out a yip-yip before it got tackled by the three trolls.  Greta could not watch, but she knew despite the shielding and laser-like weapon, the Wolv would not survive that encounter.

A second Wolv came from the tunnel and had time to look at Greta and drool.  Nudd, who had his eyes open to climb the ladder, pulled his sword and this time he charged before anyone managed to glue his feet to the ladder.  The Wolv appeared to laugh, but it got hit in the back by a steady stream of rocks that shot out from the dark behind a boulder.  The Wolv shield protected him from the impact, but the push from the rocks combined with the slippery rocks at its feet caused the Wolv to fall over.  Nudd raced passed the Wolv and headed for the dark, like he saw something the others could not see.  When the Wolv regained its feet, it roared and seemed to forget all about Greta as it bounded after the boy.

“Nudd!”  Greta and Mavis both yelled, but Lord Crag and the last goblin underground urged Greta to climb.

As a third Wolv stuck its head from the tunnel, Bonebreaker finally caught up with what was going on and had a thought, always a dangerous thing for an ogre, and he yelled, “I’ll save you.”  He charged, shoved the Wolv back into the tunnel, and roared a much deeper and more frightening roar than the Wolv could produce.

“Bonebreaker, no,” Greta said, but not too loud as Lord Crag and the goblin grabbed her and all but carried her to the surface. Mavis scurried up the rope and met her there, and they all hurried to get down behind the boxes and barrels that lined the dock and now would never go downriver.

There were a half-dozen Wolv in and around the warehouse buildings that sat back from the docks and provided the Wolv with cover. The Wolv were firing their weapons, but they were receiving return fire from Alesander, Briana, Vedix and Hermes. Lucius, Bogus and Pincushion were missing, but Greta could not worry about that just then.  The goblins, having recognized that their arrows were ineffective, were preparing to send some flaming arrows and set the warehouses on fire.  Two goblins had the magic to fire explosive arrows, which at least kept the Wolv back and wary.

It began to look like a Mexican standoff, and Greta wondered whose old and used up weapons would run out of power first, when a bolt of lightning crashed the front of two barrels. They exploded and sent splinters everywhere.  Greta heard a laugh, saw the man, lion head and all, just as she had seen him in her vision.  He was the Jupiter, the judge, and he was clearly not in the mood for play.

A second bolt of lightning struck the dock and made a gaping hole in the wood, and Greta stood, only it was not Greta.  Junior stepped into the fray and he threw a brick calculated to graze the lion’s head.  While the lion looked up to blast the brick, the brick turned into a dove and flapped in the lion face before it flew off.  That mesmerized the man-beast just long enough for Junior to arrive in the lion’s face.  One swing with Wyrd and the lion head bounced to the cobblestones.

An arrow just missed Junior’s shoulder and hit the serpent head, spoiling the serpent’s aim.  Junior forgot about the serpent that curled around the lion-man’s feet. It struck even as Junior struck, but Mavis fired at the same time, and before the serpent could gather itself for a second strike, Junior cut its head off, too.

The snake body became pinned by a dozen goblin arrows, and the goblins followed to chop the body to pieces while Junior went to work on the lion-man.  He first cut the man body in half at the waist and then chopped at the lion head. Mavis, Ulladon and Briana came up with the goblins and started slicing up the serpent head when Junior stepped back to look.  The Wolv all staggered and held their heads, like men suddenly loosed from a great enchantment.

Junior backed off completely.  The lion-man began to dissolve, like ice under a hot sun, and the serpent pieces began to melt making one big melted whole.  A spark of light broke free of the melted mass and rose above their heads.  As the melted mass vanished, or perhaps seeped beneath the cobblestones, the spark raced off to the north to disappear in the dark.

“Boat.  Hurry.” Bogus yelled from the dock. Alesander and Hermes raced to collect Briana and Mavis while Junior vanished so Greta could return to her own place.  Greta and Briana both paused to give Ulladon a thank you kiss on the cheek.  Mavis chose simply to smile and Ulladon returned a knowing smile that said they were friends but there were limits on how close a dark elf and light elf could get.

Vedix and Lucius held the boat with poles while everyone piled in.  When they shoved off, Greta said good-bye and waved to the goblins, knowing they would see in the dark.  The current took them quickly, but not before they heard the howls of frustration from Samarvant.  The Wolv were disoriented for a moment when Jupiter was ruined, but it did not take them long to pull themselves together.  Greta had no doubt they would follow the group along the shore and be there when they docked.

One down, six to go, Greta thought.

They have to make it down the river without being caught by the Wolf, and all the while, Greta wonders what will be the next piece of Mithras she has to face.