After 2737 BC, Rhodes in the Aegean. Kairos lifetime 41: Nalishayas, pirate beauty

Roland and Boston came through the time gate, laughing, and found themselves up to their horses necks in sea water. They had to turn around to get to the beach, and found the rest of the crew stopped part way there. The beach was being guarded by a group of mermen and mermaids. Lincoln was arguing, Decker was arming himself, Katie was trying to sound reasonable, and Elder Stow was floating above the waves, trying to keep his feet dry.

“Hey!” Boston yelled. “Leave my friends alone.” She kicked Honey, her horse, to get closer. The horse moved sluggishly forward, but Roland came right with her. When they came up beside the others, Boston stared. There merpeople were clearly people, like flesh and blood. They were not spirits and certainly did not belong to the Kairos.

The mermen acknowledged the elves, and the mermen looked twice at the elf maid, much to the chagrin of several mermaids, but they were not inclined to move, and their spears looked sharp.

“Quiet a minute,” Lockhart spoke loud enough for everyone to stop speaking. “We are looking for the Kairos. Perhaps you could direct us.”

One merman pulled in front of the others. “Nalishayas is our friend more than enemy. We have allowed her use of the secret grotto and bay of tranquility for her ships to satisfy the goddess, but her sailors are not friends. They filth the seas with their stink.”

“We have come into the future to find her,” Lockhart continued. “It would be a kindness for all to let us get to shore before our horses filth the sea with their stink.”

Katie patted her horses neck. “These are horses. They are plain animals.”

Two mermen startled the travelers when they broke the surface of the water practically from under their feet. They went and whispered to the merman out front, and he eyed them carefully before he spoke. Boston and Roland both heard what was whispered, but Roland prevented Boston from speaking.

“You are not some deformed centaurs trying to invade this land of peace?” the merman asked.

“No, we are human,” Lockhart said.

“Hey, I’m not human,” Boston said sharply, and then she grinned her elfish best.

“That is what made us stop and see. Even deformed centaurs would not grow into elf shape. We see you have feet, but do you walk on them? I do not know these horses you speak of.”

“Let one go to shore and they will show you. The rest of us will wait here until you are satisfied,” Lockhart offered.

“We pose you no threat,” Alexis added, and the merman pointed to her. She did not hesitate to take Misty Gray to the shore where she got down and stepped away. The merpeople could all see she was an ordinary human and the horse was a separate animal. Then Misty came from behind and nudged Alexis’ shoulder.

“They are like the dolphins of Amphitrite, but not made to go underwater,” Alexis said.

“They are helpful creatures, but shy and sometimes frightened of strangers,” Lincoln added as one of the mermaids swam up beside the merman in front. 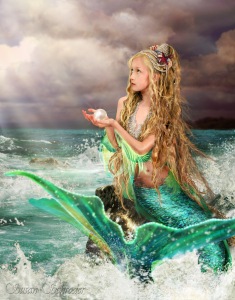 “That may be hard without legs,” Katie said.

“I can make legs,” the mermaid said.

“Melsaiahsh,” the merman sounded like he was scolding the mermaid.

“But Papa,” the mermaid responded. “They seem so nice.” The merman swam aside and waved the people to go up on shore. Melsaiahsh did not wait for permission. She raced to shore and walked out on the beach as her fish tail went away. Several other maids followed, and two of the younger mermen as well.

“Make camp,” Lockhart called out, since it was already late in the day when they came through the gate. “This fairy weave clothing is amazing.” It was already dry. “But some of the equipment should be checked, including the weapons.” He turned to whisper to Katie. “Not that I’m expecting trouble.”

“But you should be,” Boston interrupted with a grin. “Trouble is the Kairos’ middle name.”

That evening was spent giving rides to all the boys and girls and cooking a fine fish dinner. The merpeople preferred their fish raw, but Lockhart said that he never went for Sushi. Decker shrugged. He was trained to eat whatever was available.

They said good-bye in the morning and headed inland. After a short distance, though, Boston had to pull out the amulet and give it a good shake. She explained.

“I’ve learned to read this thing so I know about where the Kairos is and where the next time gate is. But we are on an island here, and it seems to be acting up. It looks like the Kairos is down along the shore, but we could cut the shore, like go across country and reach the next gate without visiting the Kairos.”

“I know. I want to see her,” Boston agreed. “I have so much to tell her and to thank her and everything. I’m glad she is a woman again.”

“Why can’t we do that?” Decker asked. “The Kairos knows we are just trying to get home, and if there is a quick route to the next gate, I say we take it.”

Lockhart thought a minute before he spoke. “A visit with the Kairos is nice, but not required. We have never had this problem before. It may be the Kairos herself made the route so we could avoid trouble. Roland, we take the direct route.”

Roland peeked over Boston’s shoulder and nodded. He rode out front, and Boston rode with him.

“I am just as drawn to the Kairos as you are,” Roland said. “The idea of missing the opportunity to see her is breaking my heart, too. But Nuwa said I had a job, working for Lockhart, and last I looked, you still work for him, too. He is the boss and that is that.”

Boston had tears in her eyes. “Why do I care so much for her. I have not even met Nalishayas.”

“You know why,” Roland said. “You are pledged now to the Kairos, as we all are.” Boston cried, but just a little.

Be sure and return tomorrow and Wednesday for the first half of episode 3.8.  The second half, pirates and all, will be posted next Monday and Tuesday, free to read.  Enjoy.