Father Aden and Lady Jennifer held hands, and Margueritte felt warmed by that sight.  Father Stephano came a moment behind them, and they crossed the road, and headed straight for Margueritte.

“My lady,” Jennifer said, and nodded her head slightly toward Marguerite as they came within range.

“Dear Margueritte.”  Father Aden began immediately.  “I do not know if you are well enough or strong enough for this yet,” he apologized.  “But Father Stephano has been recalled to Rome and I am afraid the matter must be settled quickly if things are going to be done properly.”

He did not have to say wedding.  That was understood.  Margueritte just stared for a moment.  She had researched this as well as she could, gathered as much information from her other lifetimes as possible, but that only assured her that there was no absolute answer.  She still felt undecided as to what she should do, or even if she could do anything; so she just stared for a minute before she spoke. 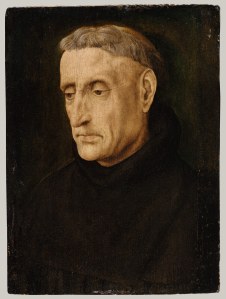 “For my part.”  Father Stephano filled the gap.  “I will say I have never seen two human beings before who were so right for each other.  I would be honored to do the service.”

“But that’s just it…” Margueritte said, and she let the sentence trail off.  She did not say that one of the two was decidedly not human.

“Yes,” Father Aden understood.  “But it is our tradition that a Priest marry and be faithful to one wife rather than subject to daily temptation.”

“Now, let’s not start that again,” Father Stephano said, to one he had evidently taken as a friend.  “We have agreed to disagree.”

“Quite right,” Father Aden said, and he turned his eyes back to Margueritte.

“I do not understand, though, why you must seek the permission of this young lady.”  Father Stephano went on.  “That is one tradition that makes little sense to me.”

“Because I am pledged to her,” Jennifer said, plainly, and she lowered her head a little as if to indicate that she was ready to listen and accept, no matter what.

“Precisely.”  Father Stephano shook his head.  “I would think the younger would be pledged to the older.”  He shrugged, as if to indicate that it was something he might never understand, but it was not that important.

Margueritte knew Father Stephano did not have all the facts.  It was that important, and, like it or not, she was the one had to decide if they could marry.  That one thing had been made most-clear to her.  No matter how many other lives she lived, this one belonged to Margueritte, and so it was up to her how she would live it.  This became her responsibility, not a decision to be made by Gerraint, Festuscato, or even the goddess, Danna.  Margueritte shook herself free of her stare.

“And what has your father to say?” she asked Jennifer.

Jennifer looked up, but not at Margueritte.  Instead, she looked to the manor house where several people came out of the front door, a sure example of the impeccable timing that the little ones so often show.  Lord Barth, Lady Brianna, Elsbeth and Owien, came out with Lord Yellow Leaf, Jennifer’s father, full sized of course.

“My lord.”  Margueritte said to the fee as he approached.

“My lady.”  He bowed to the invalid wrapped in her cloak and blanket as a man might bow to a Dowager Empress.  “We have spoken long and hard these past several days.  We have taken much counsel.  And I have concluded that I will not stand in the way of my daughter’s happiness.”

“You understand if she does this there may be no going back,” Margueritte said.

“I understand.”  Lord Yellow Leaf nodded, but he seemed to be at peace.

“Father Aden?”  Margueritte felt curious, though she did not exactly ask a question.

“I have no reservations, and no doubts.”  Father Aden answered plainly.  Margueritte did not have to ask, exactly.

“With all my heart,” Little White Flower responded.  “His God is my God, and because of that I know, whether we are apart or together, I will be his, always.”

“His God is my God, too,” Margueritte said, and only then did she understand what she would do.  “Jennifer, please come here and kneel because I do not know if I have the strength to stand and do what I must.”  She did not really intend to do anything, but she honestly did not know what might happen.

Jennifer stepped forward and went to her knees.  She clasped her hands, lowered her head and closed her eyes like a woman in prayer.  She took a deep breath and let it out slowly as if to say she was ready.  Margueritte leaned forward and placed her hands on Jennifer’s head.  Then she took a breath of her own and said what she decided.

“You have my permission, and my blessing.”

They stayed that way for a moment.  It seemed hard to tell, outwardly, if anything much happened.  Jennifer’s appearance hardly changed at all, and she never looked more beautiful, but from the inside-out she got transformed. Neither she nor Margueritte had any doubts.  She became fully human, and the proof came in the tears that began to stream down her face.  As for Margueritte, she felt something like a conduit as the power of creation flowed through her.  It felt a heady, and draining experience, though she lost nothing of herself in the process.  Then she removed her hands and Jennifer went immediately to Aden to hold him and cry on his shoulder.

After a moment, Jennifer turned to cry on Lady Brianna’s shoulder, the Lady having a few tears of her own.  Then she cried on her father, and Yellow Leaf, being as empathic as fairies are, cried with her.  Margueritte saw Elsbeth and Owien standing side by side, touching hands, though not actually holding hands.  Elsbeth had teary eyes herself, but Owien asked a question.

“Why is she crying?” he wondered.  “I thought she would be happy.”

Margueritte looked up.  She had slumped down low on her seat and her mother looked concerned.  “Bartholomew,” she said.  “Help me get your daughter to bed.”  Lord Bartholomew did not just help; he picked Margueritte up and carried her himself all the way to her room and mumbled as he went so Brianna would not hear him.

“I’d kill that hag for hurting my Margueritte so, if she wasn’t already dead.  Made you weak as a kitten.”  Margueritte smiled, but she fell asleep almost before she touched her pillow.