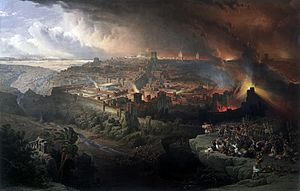 “Canterbury,” Lincoln blurted out the place name.  No telling what prompted him to make that guess.  They came out in the middle of a farm field, but no one was around to ask.  The farm looked abandoned, but when they got to the road, they found one man, a monk headed in their direction.

“I see some smoke rising from the city,” Boston said.  “It looks like something got burned.”

“The Danes are burning the monastery.  I am the sole survivor.”  The monk sighed and looked ready to keep walking.  “I am going to Winchester, if I can.”

The monk paused to look up at her.  “They have been called that.”

“You have a name?” Alexis asked.

“Wilimbro,” the man said.  “Most men call me William the Lesser.”

“The other William was your size, though he had the temperament of a child.  He would never hurt anyone.”  William dropped a tear.

“Winchester?”  Lockhart turned to Boston and Lincoln who were conferring.

“That may be where the Kairos is,” Boston said.  “It is hard to pinpoint.”

“The map is not clear. We are starting to have more towns and villages showing on the map and it makes it hard to point to one,” Lincoln looked up.  “He is in that area.”

“Good enough,” Lockhart said and turned to William.  “You are welcome to ride with us.”

William nodded right away.  “Thank you.  The road is a dangerous place for one man on foot, even without the Danes—the Vikings.”

It took a bit for Nanette to bring up Tony’s horse.  “Tony doesn’t mind staying with the wagon,” she said.  “But he would like to know what the road is like.”

William nodded again.  “I have been twice to Winchester.  In better times.  The road between Canterbury and Winchester is good, well kept.  Your wagon looks sturdy.  You will be fine.”  He paused before he put his foot in the stirrup and mounted.  He smiled at the others.

“Footrests,” Lincoln called them, and they headed off down the road.

“Deerrunner, you look tired,” Elgar said.  “Sit and join us around the fire.”

Deerrunner looked at Osfirth, the German and Gwyn the Celt before he took a seat, and he sat on the log without mumbling about aching knees or anything, though he had some gray in his hair.  Elgar knew that elves only went gray in the last hundred years or so of their life.  Time moved on.

Apparently, Deerrunner was thinking much of the same thing.  “It has been more than three-hundred years since Gerraint traveled these roads.  That seems long enough for anyone.”

Elgar smiled, but he knew elves lived closer to a thousand years.  Deerrunner turned six hundred in Gerraint’s day. That would make him over nine hundred.

“You bring us news?” Gwyn had little patience.

Elgar shook his head.  “That is Pinewood’s job.”  He looked up.  “Where is Lord Pinewood?”

“Here, Lord,” Pinewood said, as the fairy came from the woods, big sized, wearing the green jerkin and gray hooded cloak of a hunter.  Deerrunner also dressed in green, but he also wore a glamour to make him appear human.  The pointed ears would have raised too many questions, and Osfirth was a bit superstitious without that help.  Pinewood sat and Elgar turned on the old elf, or rather, the elder elf.

Deerrunner picked up a stick and stirred the fire. “You have often said we should not get involved in strictly human battles, but Marsham and many of the young insisted on following.  I thought it only right to accompany them, to keep them out of trouble.”

“I understand the exuberance of youth,’ Pinewood joined the conversation.  “I have the same problem with some of the young, er, hunters.”  He almost said fairies. 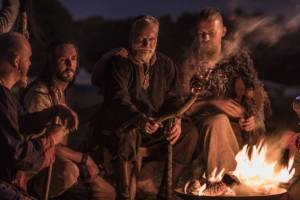 “By the way,” Deerrunner continued. “I understand Bogus and Piebald are around, and Old Dumfries is in the underground awaiting a call.”

“By the way,” Pinewood mirrored Deerrunner.  “Your friends, the Travelers from Avalon are on their way.”

Elgar rubbed his beard.  “That might be important.  Lately, they have been developing the bad habit of turning up when the trouble strikes.”

On that same evening, the travelers sat around a fire of their own.

“We made good time today,” Katie said.  “I estimate twenty-five or so miles.  If the road stays good, we might make Winchester in five days.”

“Or the usual seven to ten if the road turns, or we get stopped, or run into some kind of army, or Vikings,” Lincoln countered.

William waved his hand at the darkening sky.  “Your Vikings have taken the whole coast, the whole bay between Canterbury and London.  This was not a raiding party, but an army, a huge heathen army.  I heard they beat back the King of Mercia and pushed up the Thames. Who knows the truth of it or where they will land?”

Katie looked at Tony, but Tony just smiled and said nothing.  “So, fix a date?” Katie asked.

“I want to hear about Elgar,” Boston said.

“We all do,” Sukki said, and Nanette even turned her eyes from Decker to listen.

Lincoln read a little more but opened up after a minute.  “Not much to tell.  A second son, about… fourteen years younger than his brother.  His father…now his brother, I suppose, is the Eorldomen or Alderman of Somerset.  Elgar does not stay home much, though he has several daughters.  As a Thane, a nobleman, he serves mostly as the king’s man.  His brother gives him Watchet, a town fortress on the Somerset coast and land west to the border of Devon, and east to the mouth of the Parret River and charges him to keep the Vikings out of Somerset.  But mostly he follows the kings, one after another.  From Ethelwulf, and all four sons down to Alfred.”

“That is what it says,” Lincoln confirmed.

“Who is Alfred the Great?” Lockhart asked.

Katie would have answered, but she looked at William and said, “The future.” 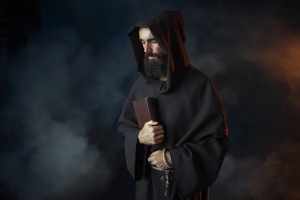 William got the hint.  “I heard the king’s wife, Osburh, had another son.  He can’t be two or three.  He might be Alfred.”  People nodded but continued to look at him.  “But for me, I have neglected my duties and my calling.  If you will excuse me, I have evening prayers.”  He stepped over to the horses, spread out his blanket and tuned out the world.

Katie quietly explained a bit about Alfred to Lockhart and the others, Lincoln filling in a few gaps in her knowledge.  Tony and Decker checked on the horses.  Tony said it was because he needed to keep an eye on Ghost.  The poor mule had worked long and hard and for a lot of miles.  Decker said he would go with him, because it was getting uncomfortable being so close to Nanette without actually touching her.  His resistance was breaking down.  Resistance is futile. He remembered hearing that somewhere.