Gerraint returned to his horse and mounted, unstrapped his lance at the same time, turned the point to the front and tucked it securely in place.

“What are you doing?”  Kvendelig asked, as if he did not know.

“For Arthur!”  Gerraint shouted and he shot out of the woods at full charge.  The men behind him were a little slower, but Uwaine and Bedivere were quick enough to almost catch up.  Menw and Gwarhyr were a little quicker than Kvendelig, who swore first before he added his voice to the charge.  “For Arthur!”

The Romans still had twice the men, but Howel now had six mounted warriors on his side.  They rode through the Romans first of all, evening the odds a little as they did.  As they turned, Gerraint saw Howel and Lionel arm themselves in the confusion.  The fight was on again, but several of the Romans had quickly mounted and found spears of their own.

This was no joust such as became almost a sport in the late Middle Ages.  This was ancient men with spears, lances, clubs, swords, whatever they could find with which to kill.  This was war, and Gerraint knew the business well.  He put down the first man he faced without the other’s spear even touching him.  The second, however, grabbed the shaft of Gerraint’s lance as he fell, effectively ripping it from Gerraint’s hands.  Indeed, Gerraint knew well enough to let it go and pull his sword. 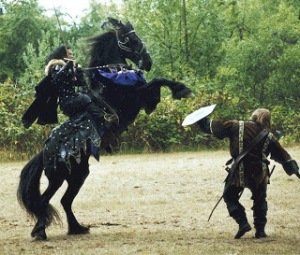 Unfortunately, with Gerraint’s progress slowed, a Roman became able to grab him by the leg.  Gerraint let go of the reins, directed the horse with his knees alone, and pulled his long knife across the face of his attacker.  The man cried out and fell away, but Gerraint got poked from the other side by another Roman with a spear.  The spear head was not strong enough to penetrate Gerraint’s armor, but the strike landed hard enough to shove Gerraint right out of the saddle.  He hit the ground, hard, and nearly got caught in his exposed face by that same spear.  He ducked in time and swung up and out with Wyrd.  The Roman spear got cut in two at the shaft.

The Roman then arched his back and his eyes glazed.  They heard the sound of whizzing and buzzing all around, as the air filled with arrows.   After barely a minute, the sounds of battle ended.

Three men, dressed in hunter green and carrying bows stepped from the trees on the other side of the clearing.  Two were rather old and grubby looking.  The third, a youngster, looked about Bedivere’s age, but clearly not one to be overawed by the men of armor he faced.  They came up to Gerraint, and the eldest bowed slightly.

“My Lord,” he said.  Gerraint pointed at Howel.

The man looked at Gerraint briefly and whispered for his ears only.  “The lady thought we might be better help than the dragon.”  Then he turned to the king and bowed more regally, but very much like a real, old hunter in the woods might bow to his king.

“More of yours?”  Kvendelig distracted Gerraint with the question.

“You never know,” Gerraint said, but he knew the young one was young Larchmont.  One thing seemed certain.  No three pairs of human hands wiped out twelve or fifteen Romans in the span of sixty seconds; and nearly every arrow a perfect shot.

“But Bedivere is hurt, and Lionel,” Uwaine said.

Gerraint looked at Kvendelig who stood at his shoulder and shook his head.  It would not be prudent to bring a more experienced healer into the present.  At least Gerraint needed to examine the patients first.

“Master.  I am so ashamed,” Bedivere said.

“No need.”  Gerraint smiled.  The wound was not bad. “You won’t have nearly the scar I have in my shoulder.”  The bleeding got staunched.  Uwaine could see to Bedivere.

Lionel’s problem looked a little more difficult.  His leg broke and Gerraint did not imagine he had the skill to set it.  So much of that sort of thing was by feel, and he was not sure what he was feeling for.

“Will I lose it?”  Lionel asked.  Howel looked worried as well.

“Afraid not,” Gerraint said.  “Rather, it is whether you will run or limp.”  He looked around.  The hunters were still there.  The eldest caught the gist of what was needed.

“My king,” he called, and Howel stepped over reluctantly to speak with the hunter, and his guards accompanied him.  Gerraint did not wait.  He let himself slip away and Greta came to take his place.  Gerraint knew he lived as a real surgeon in the early Twentieth Century and probably set more broken legs than could be counted, but the Good Doctor felt too distant in his mind at present.  Greta, the Woman of the Ways among the Dacians, felt much closer in time and in his memory.  She also served as a healer, and a good one.

While Lionel gasped and Greta told him quietly over and over to hold his tongue, she quickly made sure her golden hair got securely hidden by her helmet.  She fluffed out her cape with the hope that from the rear no one would suspect she was not Gerraint.  Then she took Lionel’s leg, carefully, and examined it.  “A clean break,” she said.  It should heal completely if you stay off of it for a while.”

“But.”  Lionel wanted to protest at her presence, but he did not have the strength.  He struggled too hard against the pain and against passing out.

“You can talk to Bohort about it when you are better, and Lancelot if you need to, but no one else.  Do I make myself clear?”  She shot a thought to the hunters.  They instantly reverted to fairy form and flew off even as she snapped Lionel’s leg in place.  Lionel stayed busy saying yes to her question about it being clear, so that delayed his scream.  By the time he let out the sound, and Howel and the others shook themselves free from the wonder of the fairies, and came running, Greta had gone and Gerraint was home.

“Keep still,” Gerraint ordered Lionel, though Lionel had passed out at that moment.  “Have to immobilize it.”  Gerraint stood and swung his fist into the image which Greta, with her own gifts of sight, had seen.  Gerraint’s fist landed square in Menw’s invisible face.  As the man fell to the ground, dazed, he lost his concentration and became visible.  Gerraint picked him up, right off his feet, and stepped him back a couple of steps.  The others laughed, not sure what they were laughing at, when Gerraint whispered straight into Menw’s ear.  “If I catch you trying to look down my dress again,” he said.  “I’ll make you a eunuch.”  He tossed Menw about five feet to where the man fell on his rear and yelped.