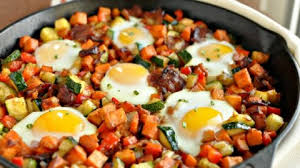 Gerraint awoke to the smell of fried eggs, biscuits and plenty of bacon.  They slept on the grass not far from the lake, but it felt quite comfortable, all things considered.  He opened his eyes, slowly.  Uwaine and Kvendelig were already up and by the fire.

“Lolly!”  Gerraint shouted and woke the rest of the crew.

“Lord.”  Lolly said without looking.  Her eyes were focused hard on the pair trying to snitch bits of breakfast before it was ready.  Kvendelig, the less experienced of the two, had already felt the rap of her cooking spoon on his knuckles more than once.

“Here.  Gerraint.”  Kvendelig protested.  “Uwaine says this dwarf female is one of yours, whatever that means.”

“And if I am?”  Lolly was also not one to take back talk or be maligned in any way.

Kvendelig drew his hand up and away from the spoon.  “I was just going to ask his majesty if perhaps he could convince you to let me have my breakfast now.  A man could starve to death waiting to be fed around here.” 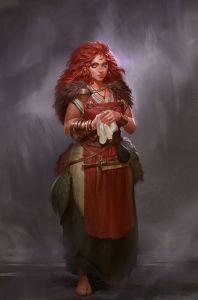 “Chief Kvendelig!”  Gerraint pretended offence but he clearly smiled on the inside.  “I would not dream of asking the good woman for such a thing.  She will feed you when it is good and ready, and not one moment sooner.”

“Trouble is,” Uwaine pointed out.  “You haven’t eaten anything in four days.”

Lolly’s spoon snapped out and everyone heard Menw yelp.  “Give it up,” Gerraint said.  He imagined he could just make out the outline of the man, but then it might have been a trick of the rising sun.  Menw became visible.

“But I’m with Kvendelig,” Menw complained, as he became visible in a place Gerraint had not guessed.  “I’m starving.”  Menw sucked his wrist.

Gerraint smiled but while the others laughed his eyes snapped back to the place where he had imagined the outline of a man.  It appeared gone, but Gerraint wondered.  He might be a little slower and less agile than in his youth, but his senses were not diminished.  In some ways, they were sharper.  He had felt someone there, looking at him.  But then, he could not be sure if perhaps it was not the light after all.  He said nothing about it.

“No nun ever snapped a better ruler,” Gerraint said instead, to everyone’s incomprehension, but by then, Lolly started serving up, and in typical dwarf fashion, they had twice as much as they could possibly eat, even with three of them half starved.

“I have a terrible headache,” Gwarhyr admitted.

“I remember,” Kvendelig said, plainly, and it became clear in that moment that all three remembered all at once, and they were embarrassed beyond words.

Gerraint stared them down, one by one.  “There is no way to Melwas through the lake.”

“Gwynwas,” Gwarhyr said.  “In the Welsh, its’ Gwynwas for Gwyn who guards the gate to the island.”

“It has many names,” Uwaine suggested.

“But is that certain?” Bedivere said his first words of the morning.  He still seemed a little uncomfortable, being so near the dwarf.

“Does any doubt the word of Rhiannon?”  Gerraint asked.

“The Lady Nimue?”  Kvendelig asked and Gerraint nodded.  They had imagined she was a spirit or a fairy of sorts.  They did not know going in that it was the goddess, herself.  Slowly, Kvendelig nodded, and Gwarhyr and Menw nodded with him.  “No point in arguing with a goddess once she has her mind set,” Kvendelig said, and that seemed to settle the matter. 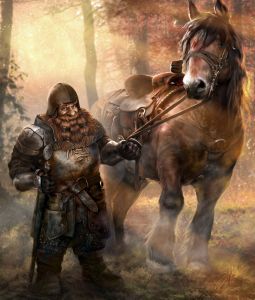 “Now we seem to be missing someone.”  Gerraint looked around.

“No sir.”  Bedivere counted.  “All present and accounted for.”

“My Lord,” Luckless said as he brought in their horses, saddled and loaded with precious gifts, blankets of elfin weave, small saddlebags of silver and gold, and not a few jewels, and the weapons of the three Welsh Lords all made like new, if not replaced by better.

Luckless cleared his throat.  “The Lady of the Lake says let this be a gift for your trouble and the fine entertainment you provided for the court.  Do not return, however, or the fine things will all turn to dust.”  The dwarf did not like speeches, and immediately turned to his dwarf wife.  “Got any seconds?  Leftovers?”  He looked famished, but Gerraint felt sure he had eaten his fill before the men awoke.

“Always for you, my sweet.”  Lolly handed him the most enormous plate of all.

Gerraint nodded again.  “Quite young.  She’s only about two hundred years old.  Luckless is about three hundred.”  Bedivere swallowed on their ages and nearly choked in the process.  A sharp slap on the back by Gwarhyr was needed.

“Perhaps they are yours after all,” Kvendelig concluded.  “Always thought there was something odd about you.”

“And vice versa,” Gerraint said, but he did not explain as he got up and turned toward Luckless and Lolly.  “Many thanks,” he said.  “Will you be traveling with us?”  He asked and found himself a little disappointed when they declined.

“Little ones,” Lolly said, a little embarrassed, and Luckless puffed out his chest.

“I got me a young one to hand down the family treasure,” Luckless said, proudly.

Gerraint quickly turned to the Welshmen.  “He means iron tools, like a blacksmith or tinsmith might use, not real dragon-type treasure.”  The three Welsh faces drooped, but they understood and did not doubt.

Soon enough, the six men were off on the road, headed toward Howel’s castle and the coast.

“That was easy enough.”  Bedivere whispered when he had the chance.

“Not home yet.”  Uwaine pointed out. 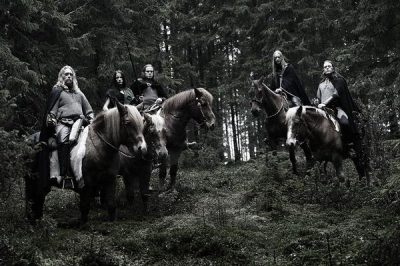 That afternoon, they crossed a trail which Kvendelig said was freshly made by troops of some sort.

“In search of what?”  Gwarhyr asked.

Gerraint looked around at those with him and shrugged.  He turned to the trail and put Kvendelig in front.  Despite his enchantment at the Lake, Kvendelig really was a first-rate hunter and tracker.

Not much further along, Kvendelig signaled them to be quiet.  He and Gerraint pushed up ahead to look and dismounted just before they came to the edge of the trees.  Howel stood there, with Lionel and three guards of Amorica.  Two other guards appeared to be dead along with three Romans, but twenty more Romans had them prisoner.  Odyar had led the king and Lionel into a trap and Odyar clearly commanded the Romans.  Neither Gerraint nor Kvendelig could hear what they were saying.  A shallow hill covered with meadow grass stood before the clearing in which the men stood.  But then, Gerraint did not need to hear what they were saying.