The travelers stopped in a grove of trees to rest and snack before they went into the city.  The horses needed extra rest and water to get through the desert.  Sekhmet kissed her sister, hugged her mom and dad, and told them to not take too long—that she would meet them in the gate.  She vanished, and the travelers adjusted their clothes and their minds to being in a hot and dry land.  It made quite the contrast from the chilly wind and rain of Greece, and Alexis said, with the sudden, drastic change in climates every time they stepped through a gate, it was a wonder they didn’t all end up with pneumonia.

The travelers got to Memphis in record time, and as they sat for their mid-morning snack, they talked of small things and tried not to focus on how much further they had to go to get back to their own twenty-first century lives.

“So, that Horemheb was not relate to the Horemheb that was governor of Memphis back in Rachel’s day?” Lockhart wanted to be sure.

“Not an uncommon name in the eighteenth dynasty, I would guess,” Katie said, and placed a hand gently on his shoulder so he would look at her.  All he wanted to do was look at her.  That brought a different thought to Lincoln’s mind.

“So, Major.  What was going on between you and Meriope?”

Decker growled, but softly.  “She’s a virgin dedicated to the goddess, and no way I was going to break that bond.”  Everyone turned to look at him.  Even Artie paused in her staring and grinning at Katie and Lockhart.  Decker took a sip of his tea and completed his thought.  “That was just Aphrodite toying with me.”

A wail came up from the river.  People jumped, Katie, Decker and Lockhart ending up on their feet.  It sounded human, but not exactly human at the same time, and every spine felt chilled by the sound.

“Let us look,” Alexis said, and Boston nodded, but looked like she was not sure if that was such a good idea. They practiced going invisible, and ran toward the water.  The others felt the wind.

Elder Stow got out his scanner and after a moment he announced, “I don’t see anything.  This little scanner is useless.”  He turned it over.  “It is fully charged, but that Anazi equipment I use to keep it charged is on its last legs.”

Boston and Alexis stopped by the water where an odd sight greeted them.  A cobra that had to be nine or ten feet long had a six-foot crocodile wrapped up, like a boa or a python.  They were thrashing around the edge of the water, and it looked like the crocodile was losing the battle.

“That makes no sense,” Alexis said.  “Cobras don’t get that big, and they are not constrictors.”  Alexis and Boston watched for a moment before she turned her head toward Alexis and Alexis added, “I learned something about snakes and poison in nursing school.  You know, venom has medicinal properties.”

Boston nodded, and checked first to be sure the way was safe before she bent down to the water and tapped the surface.  “Little ones.  Water babies,” she called.  “In the name of the Kairos and on the Kairos’ business I would speak with you.”  She tried calling twice before she looked back at Alexis.

“I sense fear,” Alexis said, just before a woman appeared, standing on the water.  The woman looked to be made of water, like a water sprite, but she was clearly more than a sprite. She was a naiad of the river—Boston felt the power in the woman—and she might have been there watching the whole time without their knowing it.

“They are afraid,” the woman confirmed what Alexis felt.  “I am one of the many daughters of the Nile, and I can speak to the questions I see in your hearts and minds.  In the beginning, by decree of the Aten Ra, Sutek became the chief defender of the Re.”  She paused to point at the sun.  “But Sutek became corrupted and got sent over to the other side ages ago.  Horus became the king, as the Aten Ra decreed, but then the Aten himself freely chose to depart for the other side.  In these last years, the Aten tried to return and the gods themselves feared to see it.  The Kairos prevented that return, and the gods are pleased, but in the process, the underworld became torn and shaken.  Chaos has come.”

“A forbidden class of demons your Kairos calls poltergeist have been released from their prison on the other side.  They are formless and shapeless, but they can haunt life and are the very nature of chaotic evil.  Worse, Apophis, the god of chaos himself has escaped from the underworld.  Now the Re is in grave danger, the Aton is no longer able to decree otherwise, Sutek is no longer there to defend him, and Horus is withdrawn into his own safe space and wishes to remain apart from this place.  The world stands in peril.  Apophis may eat this world, beginning with the Re, which is the sun.”  She did not vanish, exactly.  She split into a million droplets of water and blended back into the great river.

“That sounds bad,” Boston said, and Alexis led them back to the others where they reported the news and what they saw.  Lockhart wisely moved them on to the city.  He felt what they all felt, that there was nothing they could do about the trouble, though of course they would help if they could.  Sekhmet met them in the gate, and when they told her what they learned, she shrugged it off.

“Those river girls live to trouble the waters,” she said.

Sekhmet took them to a private home where the horses would be safe and the travelers could sleep well without the need for keeping watch.  By the time they arrived, they relaxed and put the worried thoughts out of their minds.  The man of the house looked to be about forty; and he showed them great kindness before he let it slip that he knew who they were and that they were trying to return to the twenty-first century.

“I am Ptah,” he admitted.  “I am Sekhmet’s actual father, though I don’t mind that you have adopted her.  You two seem to have a good heart for strays as well as for each other.”  Ptah smiled for Katie and Lockhart and added, “Here, my daughter told me that I am supposed to say it is a shame you are not yet married.  You know, we could arrange things easily enough; but honestly, I know you will do what is in your heart when the time is right.”  He turned to his own thoughts.

Katie took Lockhart’s hand, but then asked what put that serious look on Ptah’s face.

“Eh?” he looked up.  “No, I just realized that you are a clue to the mystery of dissolution.  The gods, most of the gods are aware that a day will come when our life in the flesh will come to an end.  We will return to the spiritual realm, and the spirit lives we had at first, without eyes or ears or any way to know how we are affecting life on the earth.  Some, well… Many protest that humanity will not survive without our willful guidance—without the testing of the soul, and pointing the right way.   But here you are.  You come from after the time of dissolution, whenever that may be, and you are mature and intelligent and quite capable of building a good life without our interference.”

In that moment, Boston came running down the hall, followed by Alexis and another elf maid, and she yelled.  “Hey, look.  We got elves.”

Sekhmet and Artie also came in from the patio, looked at everyone, and giggled.

Lincoln came in from the stables shaking his head and holding his nose.  Decker and Elder Stow followed.  Elder Stow kept trying to explain that the expulsion of gas shows that your guest is relaxed and content in your home, like a good burp after eating shows respect for the food.

“You were saying about intelligent and mature,” Lockhart said. 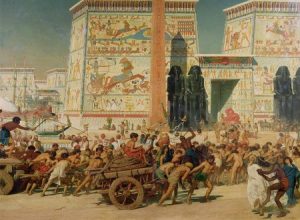 Mutemwiya and her neighbor, Nephthys, walked slowly to the town marketplace, two old ladies walking at an old lady pace.  Kiya, burdened with her big bag of vegetables that banged her hip every time she picked up her feet, decided that the slow pace to town was just as well.

Bubastis was a growing, vibrant place.  It became a little city in only the last hundred years, as Kiya recalled from conversations with the palace bookkeepers—what felt like ages ago.  That was one of the reasons she chose to hide in Bubastis. The town had new faces almost every day, so people paid no attention.

The Nile had slowly shifted, as it did, making new arms there and revealing more fertile soil here in its march to the sea.  Bubastis slowly gained land, good fertile land, and people came to till that land, and the city grew.  Kiya imagined the city would grow for another few hundred years before the Nile slowly shifted again and the city started to shrink again.

“We must stop at the temple on the way,” Mutemwiya reminded them, as if they had forgotten.  “We must offer our best to the goddess if we hope to have success in the market.”

Kiya smiled.  Bast served as goddess of many things, but mostly she was goddess of luck.  Kiya had certainly been lucky to stay hidden as she had for so many years.