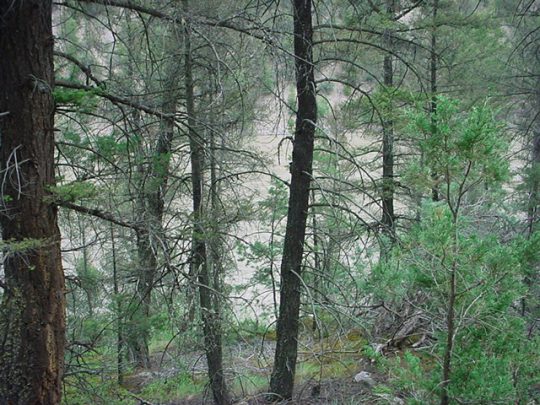 “I have monitored the prevailing wind for the last six hours,” Elder Stow reported.  “The mustard gas will stick to the ground for a day, perhaps many days where it fell and where it spread, but we should be safe enough in this one direction.  We should keep an eye on our horses’ legs and hooves for the next twenty-four to forty-eight hours, but then we will be in the clear.  Under no circumstances get down and walk.  Try not to touch the trees, grass, or bushes.  Are we ready?”

Several eyes went to Artie up on her horse, Freedom, where Ed sat behind her and held on, looking uncertain about the whole idea.  Artie nodded, and Elder Stow turned off the screens.  They waited for a minute while they heard several trees crash into other trees or fall or slide to the ground.  One medium-sized tree blocked their intended path, but it would not be difficult for the horses to step over.  Everyone got warned again not to step on the ground.  The androids, with their plastic-semi-organic flesh were no exception.

“And stay in line,” Lockhart added.  “The further you move to the left or right, the less safe you will be.

“The sulfurous gas residue will eat through your flesh in no time,” Elder Stow explained to the androids.  “The humans will just develop blisters.”

“What about me?” Boston asked.  Elder Stow merely shrugged.  He had no idea how the gas or the residue might affect elf-kind, though he pointed out that it was no friend to the environment.

Lockhart and Elder Stow took the front.  Katie and Artie, with Ed holding on, followed.  Lincoln and Alexis came next, while Decker and Boston brought up the rear.  Decker insisted on the rear-guard position where he could have some firepower to protect the group from whatever might follow them after they reached the open field.  Boston tended to straggle at the back when she did not urge her horse, Honey, to ride wild through the meadows.

The horses walked, and made no objection.  The path appeared to be residue free.  Alexis and Decker covered their mouths with fairy weave, though the gas itself had long since dissipated on the wind.  Katie said she could still smell the mustard.  Lockhart said it smelled more like garlic.

Elder Stow stopped at the edge of the trees where the way became blocked by three thick, old trees and plenty of underbrush.  Lockhart pointed.  Elder Stow nodded.  They went left around the roadblock and broke out into the grassy field.

“All clear,” Elder Stow said.  “But we would be wise to quickly move out of the area.”

They trotted toward Edward’s wrecked fighter craft, not a direction they would have chosen if they had a choice.  Fortunately, Decker had checked the sky with his eagle eye, and Elder Stow had double-checked with his personal scanner, and neither saw anything overhead.  Lockhart wondered if perhaps the Anazi wrote off the fighter as a loss when the homing signal quit.  Boston wondered if the glamour fooled the machines after all.  Ed shook his head, as he had learned to do for ‘no’.  Like some humans, though, he had not yet realized that a head shake was ineffective when people could not see his head shake.

“It is not the Anazi way to leave salvageable material unaccounted for,” he said.

“I can confirm that,” Artie added, and leaned back to smile for Ed.  “I like having your arms around me,” she whispered, and clearly, Ed did not know how to interpret that.

“We should be completely in the clear by now,” Elder Stow answered a question Lincoln asked.  Several people got down to take another look at the crash.

“Anything you can find to recharge your equipment?” Lockhart asked Elder Stow.

“Good thinking,” Elder Stow said, and he immediately joined them on the ground and began to rummage around.

Ed spoke when his feet once again touched the ground.  “There are not many Anazi left,” he said.  “We came here, an advanced group to prepare for an invasion, but the humans used the gas on us.  Many androids melted, as Elder Stow suggested.  Most of the Anazi became sick and died.  I do not know what message has been sent to home-world, but I saw that the conquest of this world would not be as easy as some said.”

“But mustard gas should be beyond the ability of the locals to produce,” Katie still insisted.

“Like gunpowder,” Boston countered.  “It is not a complicated compound; it just has to be discovered.”

“I suspect the Kairos,” Lincoln said.

“Or the Masters,” Lockhart said and frowned.  “The Kairos would not likely make something that could disturb the flow of time and history, but the Masters would.  Remember, their intention is to change history to make it come out more to their liking.”

“I would think establishing the kind of scientific lab and secure procedures to produce the gas safely would be the hardest part,” Boston said.

“And the most potentially damaging to history,” Alexis, the nurse agreed.

“I don’t know,” Katie hedged, and they all turned to listen to the doctor in ancient and medieval history and technologies, to hear what she had to say.  Katie cleared her throat.  “The Egyptian physicians in this age had labs and safe and secure procedures good enough to mummify the

kings.  They knew and practiced certain form of surgery, successfully.  Their procedures had to be good.”

“So, the Egyptians are suspect,” Lincoln thought out loud.  “Maybe the Masters wanted to repel the Hyksos invasion.”

Eyes naturally went to the sky before they returned to the ground where they saw men, and several wagons and chariots approaching.

“Stow,” Lockhart got the Gott-Druk’s attention before he got up on his horse and pulled his shotgun.

“Coming,” Elder Stow responded.  “I found something that may work for a few time zones.  It is primitive, but the Anazi do quality work, so it may last a couple of hundred years.”  He stuffed some pieces in his saddlebag and mounted with the others.  They walked the horses to meet the oncoming group.

“Friend,” Lockhart shouted when they got within range.  “Where are you headed?  Are you searching for someone?  Perhaps we can help.”

Boston reacted.  “Hey!  Stop that.  Leave our equipment alone.”  Several flashes of light, like little explosions appeared around the horses.  They looked like they were insects driven back by some force.  Alexis’ Misty Gray and Katie’s Beauty startled and bucked.  “Get big so everyone can see you,” Boston ordered.

A male fairy in armor appeared, floating in Boston’s face.  He asked a question that came out like a statement.  “You are not the Masters?”

“No way, Jose,” Boston answered.  “We belong to the Kairos, and we are looking for him…”  She checked her amulet and pointed.  “That way.”

A fairy woman appeared next to the man.  “You are the red-headed elf who travels with the yellow hair woman and former elf, and the men who ride on the big horses from the future.”  It was a mouthful.

The male fairy answered.  “My name is Wedge.  We are the smidgens made by our lord to interfere with the workings of the alien machines.  We took down the fighter plane, but we have been strictly charged not to harm the androids that pilot such machines.”

“This is your big size?” Lincoln asked.

“Smaller than the human eye can see,” Alexis and the female fairy spoke at the same time.

“Hi, I’m Cherry,” the female fairy said, as she fluttered up to face Alexis.

The men, like soldiers, arrived at that point, and the chariots stopped, and the men watched while the rest of the smidgens got fairy big and introduced themselves.  Lockhart looked at the man in the chariot who appeared to be the head man.

“Should you lead, or should we?” Lockhart asked.

The man shrugged, split his group in two so some could lead and some could follow, and started out with a word.  “We should arrive at the great ships by sundown.”

“I do not understand,” Ed admitted as he turned his head back and watched Cherry get comfortable sitting on Alexis’ shoulder.  He saw Wedge sit in the mane of Lincoln’s horse.

“The universe is more alive and full of life than the Anazi can imagine,” Artie said.

“There are more things in heaven and earth than are dreamt of in your philosophy,” Katie added.

“I do not understand imagine, or philosophy, but I do not doubt what you say is true.”  Ed responded, and he paused to think.  “I believe you, but there is no explaining it.”

“It is called faith,” Artie said with a big smile. 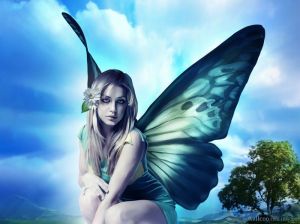 “I think it is called trust,” Katie offered another word.  “By his own free will, he is willing to trust what we say.”  Artie nodded in agreement.  Ed shrugged, like he saw the human shrug.

“The visual evidence helps,” Alexis spoke up from behind.

“It does,” Cherry agreed.  “I heard of you all my life, but I never thought to see you.  You seem very nice… for a human.”