Rebecca took Lockhart, Katie and Father Mingus with her.  She said same group as in Babylon, but she left Boston behind because Boston was up to her elbows in deer blood.   Tel-Aram walked beside Rebecca, and it looked to Katie like that was where he wanted to stay.  Lockhart imagined Rebecca and Tel-Aram were living in a kind of truce.  The guards around them supported that idea by leaving the strangers plenty of room.  It was likely they had learned not to crowd Rebecca’s friends, and maybe learned that lesson the hard way.

The king’s house was not especially larger or more opulent than the other houses around the square, but it did appear to be actually two houses stuck together.  Katie remarked that the royal family probably lived in one house and conducted business in the other.  There were two front doors and Tel-Aram stopped his men outside one of them. 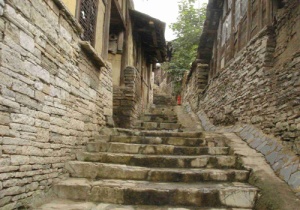 Rebecca paused to speak to her friends.  “King Nabrabel is a stuck-up, prejudiced old man with no tolerance for anything other than abject obedience.”  She touched Tel-Aram’s hand, which made him smile.  “Tel-Aram and I will prostrate ourselves, but it may be best if you did not.  If you do, he may wish to lay claim to your horses and who knows what?  I will present you as poor travelers who will be moving on as soon as possible.  Hopefully we may have a few days to relax.”

“Too bad,” Lockhart said.  “After the last time zone I started thinking it was no skin off our nose to bow, if called for.”

“Maybe next time,” Rebecca said.  “Here, to submit gives him ownership, at least in his mind.”

“This may help,” Mingus said.  He removed the glamour that made him look human.  The guards gasped and stepped back, but Tel-Aram nodded, like he understood something about Rebecca’s friends.

Rebecca clearly thought about it, but said nothing.  “You have your handguns with you.  Let us hope you don’t have to kill anyone.”

“Let us hope?” Tel-Aram wanted to object to the idea, but Rebecca moved inside.

The downstairs of that house was one big room with a raised ceiling supported on a half-dozen posts.  In the back, there were stairs that no doubt went to some sort of second floor.  To their right and toward the back there were double doors which no doubt led into the house next door.  On a two-foot-high platform at the back, there were three chairs.  A gruff looking old man sat in

There were several other men in the room, and several guards, but they kept back so the strangers could approach the throne.  Rebecca and Tel-Aram went to their knees and their faces, briefly, before they stood again.  The strangers did no such thing.

“Woman?” the king spoke, and it was not a nice sound.

“These are travelers come from far away Babylon,” Rebecca said.  “They have further to go, but after many days in the wilderness, they thought to stop here briefly to see the greatness that is Ur of the Chaldees, as they call it.”

“You know of our home?” the Queen spoke out of turn.

“Only by reputation,” Katie responded woman to woman.

“Enough,” the king waved his hand at the women and the queen shrank back.  “I see one is a beast of the wilderness.”  The king pointed at Mingus.  It was hard to tell exactly what the king thought about that, except it was not anything good.

“That may be,” Mingus said.  “But even in the wilderness we know how to be hospitable to the strangers and wayfarers that come among us.”

Lockhart quickly interrupted.  “I am only sorry we will have to move on so soon and will not have the chance to enjoy your full hospitality.”

“See that you do,” the king said, hearing only that they would soon move on.

The son spoke.  “Ur-Baal belongs to the Kaldu.  We have no room for wild ones or for strange looking people.  We have Arameans who serve us, and that is enough.”

“But she has yellow hair,” the queen blurted out what most astonished her.

“Enough,” the king growled this time.  He looked ready to tell them to go away, but his eyes got big and his mouth looked like it could not close.  The king stood and backed away, knocking over his own throne.  He pointed at the strangers and stuttered.  “uh—uh,” before he screamed. 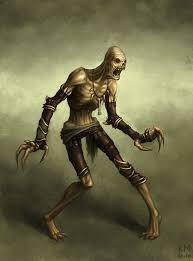 Mingus and Katie reacted to the evil in the room.  Lockhart, with his police trained instincts drew his revolver only a second after Katie pulled her M1911A2.  Mingus pointed at the stairs and yelled.

It was only a vague shadow, but Mingus threw a fireball even as Katie and Lockhart fired.  Bullets struck the head and chest, and when the fireball hit the stomach, the ghoul became fully visible.  It had no time to howl before its middle exploded, scattering pieces of ghoul parts around the room.

Mingus stayed by Rebecca and kept his senses wide open as Katie, Lockhart, Tel-Aram and several guards ran to check on the creature.  It had begun the characteristic meltdown that would leave a green and purple smudge on the floor.

“That means there are nine more out there,” Lockhart agreed and looked around the room while Tel-Aram’s eyes went wide.

“We probably have twenty-four to forty-eight hours before they show up,” Mingus shouted, having heard from across the room.

“Woman,” they heard the king again, and it sounded angry, and afraid.  The son looked lost.  The queen still had her hands over her eyes.

“Good thing my friends arrived,” Rebecca yelled.  “No telling who might have been eaten if they weren’t here to stop the ghoul.”  It was some fast thinking.

The king visibly paused.  “Get out,” he hollered.

“You heard the king,” Mingus added, and moved them toward the door before the king thought of something else to say.

Once outside, Tel-Aram repeated his question.  “Nine more?”

“They travel in ten-packs,” Lockhart said.

“They possess the mind,” Mingus explained.  “Generally one at a time, but I would guess the king was possessed and he saw us as ghouls.”

“I bet the ghoul wanted him to yell to kill us, but the king was too scared to say anything.”

“Why are you glad we are here?” Lockhart asked Rebecca as they started back to Rebecca’s house.

“Because I am sure the Kasdim would blame us, the Arameans for this plague of ghouls.”

“Instead, they will blame us,” Lockhart said.

“And they wouldn’t be wrong,” Katie added.

“But, what can we do?” Tel-Aram sounded a bit desperate.

Rebecca smiled.  “Get your men.  Search the town in groups of three.  Listen for screams in the night.”  She stopped, slipped one hand on the man’s shoulder and kissed him on the cheek.  “You captured a Blob.  A few ghouls should be no problem.”

Tel-Aram stood in shock for a moment before he ran back to gather his men.

“We should leave first thing in the morning.”

“I’m sorry,” Rebecca said.  “I was looking forward to you staying a few days.”

Tera’s family lived next door, and the other Arameans beyond.   While the supper cooked, Tera’s sons, including Abram, took the remains and uncooked meat to the people to share the wealth.  When Rebecca, Lockhart, Katie and Mingus returned to the yard, there appeared to be a real party going on.  That got cut short when Lockhart told the others about the ghoul.

“Mingus says we may have twenty-four hours before the other nine get here,” Katie said.  “But we should leave in the morning, just to be safe.”  The others were disappointed.  They were looking forward to staying for a while as well.

“Maybe Pluckman and his band of merry dwarfs will get back in time to help,” Rebecca said.

“I sent him out to find me a left handed smoke shifter,” Rebecca said with a straight face.  “Now, everyone, wash-up for supper,” Rebecca added nice and loud.  “The smell of that rump roast is starting to drive me crazy.”

“I covered it with flour and garlic,” Boston said with a big grin.

“You do have a mixed bag when it comes to cooking,” Alexis said.

“Don’t worry,” Decker said.  “I got flank steaks and some fillets cooking.”

“I would think a giant would be starved all the time,” Tera said, but he added that he felt starved, too.